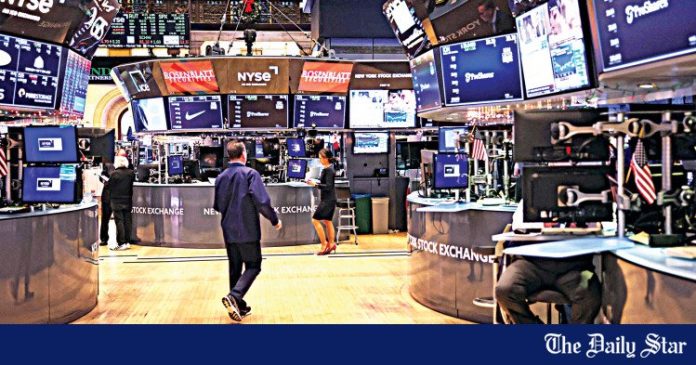 Traders work on the floor of the New York Stock Exchange during afternoon trading on December 21. US and European stocks remained volatile on Friday as investors were concerned about recession risks. Photo: AFP

Traders work on the floor of the New York Stock Exchange during afternoon trading on December 21. US and European stocks remained volatile on Friday as investors were concerned about recession risks. Photo: AFP

US and European stocks wobbled on Friday despite a key gauge showing inflation to be slowing, as investors remain concerned about recession risks.

Equities had fallen on Thursday as data showed the US economy grew a lot more in July-September than first thought, while jobless claims rose less than expected last week.

The readings suggested that despite almost a year of rate hikes and decades-high inflation, activity remained strong and the US Federal Reserve has much more work to do to rein in inflation. The Fed has made clear it is willing to push the US economy into recession to bring inflation back down.

That represents a decline from the annual 6.1-percent rise registered in October. Meanwhile, personal income increased 0.4 percent month-on-month, but personal spending edged up only 0.1 percent.

“The key takeaway from the report is that real spending was flat while the inflation rates were still too high for the Fed’s liking, making for an offputting stagflation mix,” said market analyst Patrick O’Hare at Briefing.com.

Meanwhile, data showed US durable goods orders dropped 2.6 percent in November, but that was primarily due to a sharp decline in highly volatile aircraft orders. Excluding transportation, new orders held firm with a 0.2-percent gain.

Those pre-market reports sent Wall Street lower, but stocks rebounded after data showed a surprise jump in new home sales as well as an increase in consumer sentiment, including a key drop in inflation expectations.

“US stocks pared earlier losses as traders digest a wide range of mixed economic data that overall supports the story that inflation is coming down,” said Edward Moya at OANDA trading platform.

The Dow and S&P 500 were both marginally higher in late morning trading, but the tech-heavy Nasdaq was still lower.

The yen surged this week after the Bank of Japan tweaked monetary policy, in a surprise move that hinted at future rate hikes.

Hopes meanwhile that China’s growth will surge as it rolls back its zero-Covid strategy have been dashed by a surge in cases across the country that has kept people at home, and battered travel and economic activity.

Oil prices jumped more than three percent on supply concerns after a senior official warned Friday that Russia could cut up to seven percent of its oil production next year.

Moscow is looking to follow through on a vow not to sell crude to nations implementing an international price cap over its invasion of Ukraine.

News - October 3, 2022 0
Chief Executive Officer Ulrich Koerner had sought to calm employees and the markets over the weekend after the stock touched a record low and...

News - August 17, 2022 0
Chinese troops will travel to Russia to take part in joint military exercises led by the host and including India, Belarus, Mongolia, Tajikistan and...

Petraeus: Putin is ‘literally out of moves’

News - November 3, 2021 0
In March of 2019, Jeremy Banner was driving his Tesla Model 3 when he activated its Autopilot feature. Ten seconds later it crashed into...

News - November 18, 2022 0
FTX logo displayed on a phone screen and representation of Bitcoin cryptocurrency are seen in this illustration photo taken in Krakow, Poland on November...
© 2022 Venture Current is a Flag Media LLC Publication. All Rights Reserved.
VC is part of the FLAG Token rewards network. Clients and partners can use FLAG Tokens for VC products and services.
VC runs 'Automatic' software. Stories posted here come from generic-topic Google news RSS feeds as well as client and partner-approved content.
If a story appears on this page that needs to be deleted due to licensing issues, please message us immediately so we can help you.