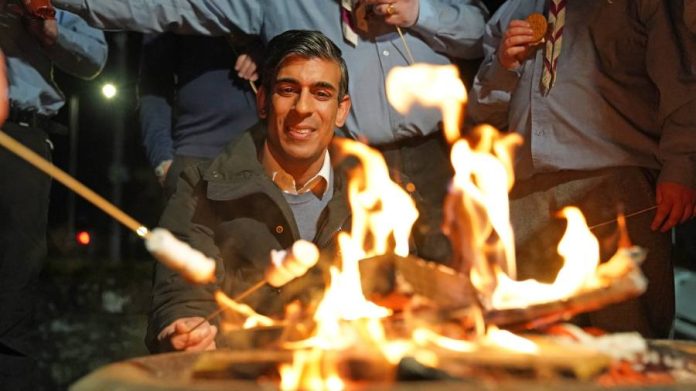 This article is an on-site version of our Inside Politics newsletter. Sign up here to get the newsletter sent straight to your inbox every weekday

Good morning. Keir Starmer will speak today in Davos, promising to repair relations with the EU and generally aiming to repeat one of his big messages for 2023: that he is a reassuring presence who is ready to be prime minister.

On the other hand, Rishi Sunak has skipped the World Economic Forum in Switzerland. Some thoughts on why and the risks of that below.

Inside Politics is edited by Georgina Quach. Follow Stephen on Twitter @stephenkb and please send gossip, thoughts and feedback to insidepolitics@ft.com

Swiss you were here

Why is Keir Starmer in Davos? Well, there’s the text and the subtext. The text is “Starmer is in Davos to reassure British businesses and the global financial elite that he and his shadow chancellor, Rachel Reeves, will be responsible custodians of the British economy”.

There are all sorts of reasons why the Labour leader wants to do that. One, of course, is his desire to dispel the fears that some voters have about his party, both due to its recent Corbynite past and the economic difficulties it encountered in the wake of the financial crisis and in the 1970s. Starmer is in Davos because it would be less painful (for him, at least) than tattooing “I’m not Jeremy Corbyn” on his face. But another reason is that the UK does have a real credibility problem. It’s not just voters who need an extra dose of reassurance at the moment.

The Labour leader has both audiences in mind in his interview with George Parker and Jim Pickard in today’s paper, alongside his shadow chancellor Rachel Reeves.

But the subtext of Starmer’s trip is important too. It says: “Hey, look how prime ministerial I am!” Starmer is doing the same thing David Cameron did when he fitted out his office in CCHQ to look as much like Downing Street as possible: he is dressing and posing for the job he wants, rather than the job he has. He is trying to create a sense of not just momentum, but inevitability, around him and his party.

It helps, too, that Rishi Sunak is not at Davos and the ministers he has sent are keeping a low profile (trade secretary Kemi Badenoch and business secretary Grant Shapps are representing the government). As Katy Balls writes in her Spectator column, Sunak is swerving the lavish Davos summit in part because he is still bruised from the rows that helped derail his first bid for Tory party leadership over his family’s financial affairs.

Sunak’s problem here is twofold. The first is that if he wants British voters not to see him as a member of the global elite, he had better hope that they are too poor to afford TVs, radios, smartphones or indeed any other means by which they might see or hear from him. He needs to — and could — make that a strength, not a weakness.

The second is that in conceding so much space to Starmer he is becoming the Labour leader’s best friend. This is partly because it allows Starmer the opportunity and moment where he can burnish his own credentials. And, the less that we hear from Sunak himself, the more we are going to hear about Sunak, whether it is in attacks from the opposition, or fun scoops like this one from my old colleague Patrick Maguire (now at the Times), who has revealed that teachers at Winchester, Sunak’s former school, are headed out on strike.

Sunak’s political prospects are surely better served by him presenting himself as a Davos Man, rather than a silent man at the head of a government overtaken by events and a country so roiled by industrial disputes that even teachers at his own former private school are taking to the picket line.

A confession: I spent far too much time teasing Gideon Rachman that market mechanisms are almost always right when I was ahead of him in the FT’s charity auction. So, now that I am slightly behind, I am worried I will have to eat my words (and not just a delicious meal at Turnips, a lovely restaurant in Borough Market). Why not bid for lunch with me at Turnips, or bid up the price of lunch with Gideon further to teach me a lesson in humility? You can do either or both until January 29, in addition to bidding for lunch with Dan McCrum, Katie Martin, Robin Wigglesworth or Chris Giles here.

I went for dinner with a friend at the Lahore Kebab House. I have a lot of affection for this restaurant, because in addition to being very nice and very old, it is an essential part of the east London dining scene, which, as a proud East End native is very important to me. Zehra Munir wrote a lovely piece about the Lahore Kebab House, and its near-neighbour Tayyabs, shortly before Christmas.

The food at both is exemplary. So it’s a toss-up between what matters more to you: Tayyabs looks swankier but like a lot of successful restaurants, eating there can feel rushed. The Lahore Kebab House is never going to win a beauty contest but you can linger longer over your meal. In both cases, you have to bring your own booze: the best way if you’re coming from the FT offices or the City of London more broadly is to swing by the Oranj natural wine bar and bottle shop.

News - August 22, 2021 0
Servicing one’s car personally is a time-consuming, expensive and painstaking process. It’s a cycle that can lead to more expensive repairs and safety issues...

LIVE MARKETS U.S. stocks weaken amid the weight of war

News - October 17, 2022 0
SHANGHAI  – China’s major state-owned banks were spotted swapping yuan for U.S. dollars in the forwards market and selling those dollars in the spot...
© 2022 Venture Current is a Flag Media LLC Publication. All Rights Reserved.
VC is part of the FLAG Token rewards network. Clients and partners can use FLAG Tokens for VC products and services.
VC runs 'Automatic' software. Stories posted here come from generic-topic Google news RSS feeds as well as client and partner-approved content.
If a story appears on this page that needs to be deleted due to licensing issues, please message us immediately so we can help you.