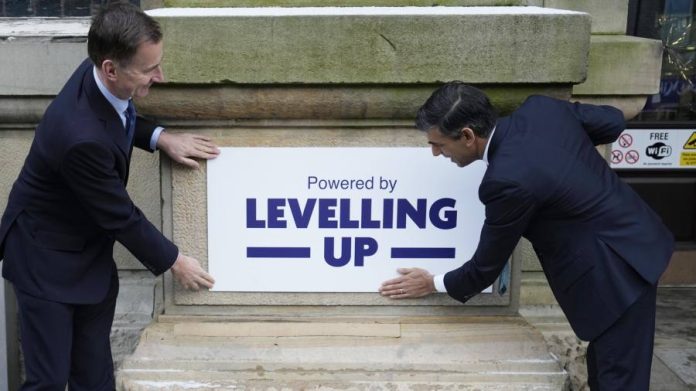 Rishi Sunak on Thursday insisted that the latest allocation of “levelling-up” funding would benefit the UK’s neediest areas, after criticism that too many grants had been directed to affluent parts of the country.

The prime minister said during a visit to Morecambe in Lancashire, which is to receive £50mn funding for a northern version of Cornwall’s successful Eden Project, that north-west England was receiving most funding on a per-capita basis.

The prime minister encountered further controversy during the trip and later had to apologise after he posted a video promoting the new funding that showed him travelling in a moving car with the seatbelt undone, contrary to traffic laws.

On Thursday the government announced the second phase of its levelling-up fund totalling £2.1bn. The policy was a key plank of the 2019 Conservative manifesto’s promise to support economically struggling towns and cities.

However, Financial Times analysis showed that large sums had been allocated to some areas with relatively low levels of deprivation.

It also indicated that, of the £1.9bn of spending that could be linked to individual constituencies, £1.2bn — around 63 per cent — had gone to seats held by MPs from the ruling Conservative party.

Only £433mn — 23 per cent — had been allocated to constituencies held by the opposition Labour party. There are 355 Conservative MPs in the House of Commons, equivalent to 55 per cent of total, while Labour represents 30 per cent with 195 members.

Two relatively well-off areas — Rutland in eastern England and Richmondshire in Yorkshire — stood out on the list of recipients. The MP for Rutland is the Conservatives’ Alicia Kearns, while Richmondshire is in the prime minister’s own Richmond constituency.

Sunak said the government was “completely committed” to levelling up “across the UK”, despite £210mn going to the south-east of England. He also denied the political colour of the recipient areas had influenced the allocation.

“I think around half the funding we have announced over the course of today, or both funds, has actually gone to places that are not controlled by Conservative MPs or councils,” he said.

However, the Conservatives’ West Midlands mayor, Andy Street, attacked the allocation process, calling it “just another example” of why Whitehall’s “bidding and begging bowl culture” was broken.

“The centralised system of London civil servants making local decisions is flawed,” he wrote on Twitter, noting that many of the funding bids from the West Midlands had been rejected.

Labour shadow levelling-up minister Lisa Nandy said the fund was “in chaos, beset by delays and allegations of favouritism”.

Nandy has attacked the government’s preferred method of allocating funding to local authorities via bidding competitions repeatedly in recent days, calling it a “Hunger Games-style” system — a reference to the science fiction series where representatives of rival areas compete in a fight to the death.

She has complained that the grants have done little to make up for the funding lost during more than a decade of real-terms public spending cuts under austerity.

An analysis by the Centre for Inequality and Levelling-Up at the University of West London showed that Thursday’s second round of funding had been distributed “more evenly” than the first round announced in 2019.

“The majority of the UK is now benefiting from levelling-up funding yet there are some of the most deprived areas that continue to miss out,” said Graeme Atherton, head of the centre.

The Department for Levelling Up, Communities and Housing said all projects had been subject to a “rigorous assessment process under robust, fair and transparent rules”.

“Successful bids are spread fairly across the UK, with around 45 per cent of investment across both rounds allocated to areas held by opposition parties.”

Downing Street called the incident a “brief error of judgment”.

“The PM removed his seatbelt to film a small clip,” it said. “He fully accepts this was a mistake and apologises about it.”

Referring to a previous incident where Sunak appeared not to know how to use a debit card, the opposition Labour party said the prime minister did not know how to manage “a seatbelt, his debit card, a train service, the economy, this country”.

“This list is growing every day, and it’s making for endless painful viewing,” the party said.

News - March 31, 2022 0
WASHINGTON — The Pentagon says an initial half-dozen shipments of weapons and other security assistance have reached Ukraine as part of the $800 million...

Rite Aid, Nike, FedEx and others

News - December 21, 2022 0
Check out the companies making headlines before the bell:Rite Aid (RAD) – Rite Aid jumped 8.4% in the premarket after reporting a smaller-than-expected loss...

News - August 5, 2022 0
Cracker Barrel is now serving plant-based sausage. Meat eaters aren't having it.The popular southern restaurant chain is one of the few places where you can...

News - June 19, 2022 0
The Bank for International Settlements (BIS) Innovation Hub announced the launch of a new set of projects targeting various aspects of traditional and crypto...
© 2022 Venture Current is a Flag Media LLC Publication. All Rights Reserved.
VC is part of the FLAG Token rewards network. Clients and partners can use FLAG Tokens for VC products and services.
VC runs 'Automatic' software. Stories posted here come from generic-topic Google news RSS feeds as well as client and partner-approved content.
If a story appears on this page that needs to be deleted due to licensing issues, please message us immediately so we can help you.