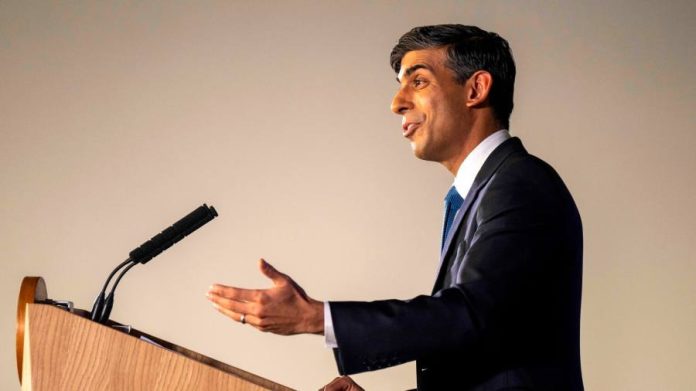 This article is an on-site version of our Inside Politics newsletter. Sign up here to get the newsletter sent straight to your inbox every weekday.

Good morning. Rishi Sunak set out five short-term pledges in his first major speech since becoming prime minister. What unites the promises is that they are all commitments that the government ought to be able to say it has met by the final quarter of 2024 — far and away the most likely time of the next election. Some thoughts on the terrain Sunak is trying to fight that contest on and his speech more broadly, below.

Inside Politics is edited by Georgina Quach. Follow Stephen on Twitter @stephenkb and please send gossip, thoughts and feedback to insidepolitics@ft.com.

Rishi Sunak’s five-point pledges are designed to be fairly futureproof: whatever happens he will be able to claim to the country with a straight face that he has met them. That makes them fairly safe moves politically but also, I think, limits their effectiveness.

As with any politician making a list of pledges, Sunak will want to be compared with Tony Blair in 1997. But the prime minister’s promises are more like Ed Miliband’s nebulous 2015 pledges, not least because both Sunak and Miliband want students to take maths until the age of 18. Now let’s look at each of Sunak’s five points:

We will halve inflation this year to ease the cost of living and give people financial security.

The word “we” here is working very hard indeed, because ultimately this is a job for the Bank of England, not Rishi Sunak or his government. I don’t have anything particularly revelatory to say on the policy implications of this pledge, such as it is: obviously if inflation falls as both the Bank and most forecasters expect, that will be good for the Conservatives’ political prospects come autumn 2024.

The short-term politics of it is that “inflation” is the government’s line-to-take when it comes to the various pay disputes ministers are embroiled in, whether in rail, the NHS or the looming battles to come in education or elsewhere.

I think there’s a danger of missing the wood for the trees around these disputes: all of us in Westminster, this email very much included, have started to use the word “win” a lot when talking about the strikes occurring across parts of the public realm. But the government doesn’t really need a political “win” over striking workers, it needs to fill vacancies across the public services.

To take Sunak’s aspiration that all pupils in England will “study some form of maths” up until the end of compulsory education at 18, as you’d expect from someone voluntarily giving their time to raise money for financial literacy, I think it’s a great aspiration.

But as Bethan Staton reports, teacher recruitment for maths is consistently below target most years and trails recruitment for most other subjects. There is no path at all to Sunak’s laudable aim of teaching maths to the age of 18 that doesn’t run into direct conflict with his government’s position on teacher pay and conditions.

We will grow the economy, creating better-paid jobs and opportunity right across the country.

I mean, you’d hope, wouldn’t you? Again, this is a “pledge” that essentially all the forecasts suggest the government will meet. Sunak and Jeremy Hunt have a good story to tell here; the actions taken in Hunt’s fiscal event, in using welfare policy to shield households from some of the pain of the downturn, all contribute to getting out of recession faster.

I think Sunak is making less of this than he should. There’s a danger in talking nebulously of plans to get growth and innovation going when the crisis is over. The obvious truth is that his premiership is likely to end fairly soon, and even if it doesn’t, the government will have a smaller majority after the next election and there is no prospect that a Sunak-led government is going to be able to do anything big or far-reaching to drive growth or innovation.

Sunak has opted not to use Labour votes to pass planning reform and that means he is not going to pass anything particularly controversial during his premiership unless something really, really unexpected happens to not only keep him in office but keep him in office with a bigger majority than the one he has now.

We will make sure our national debt is falling so that we can secure the future of public services.

The dateline on this pledge is deliberately vague so that, whatever happens, Sunak will be able to claim at the next election that he has kept his promise.

Padding your list of pledges with a target so vague that it is impossible not to keep it is a very old political trick, of course. My concern, were I a Conservative strategist, would be that there is a lot of confusion in Sunak’s messaging. On the one hand he talks as if he is an advocate of necessary belt-tightening and spending restraint. On the other, his speeches and interventions always have at least one big and expensive commitment in them. Even if those commitments are kept deliberately vague (such as that aspiration for all pupils to study maths, at some point in the future, by some teachers we have yet to hire, at a date that the government hasn’t yet shared with us) I don’t think voters hear them as vague.

I think it exists in voters’ minds as a pretty hard commitment that, yes, there will be difficult times but public services will get better and feel better. This of course links into the next pledge:

NHS waiting lists will fall and people will get the care they need more quickly.

Again a pledge that the government will be able to say has been met, essentially regardless of events. The political risk, as indeed with the inflation target, is that sure, it will probably have been “met” by 2024. But I’m not convinced it will feel like it has been met.

We will pass new laws to stop small boats, making sure that if you come to this country illegally, you are detained and swiftly removed.

Governments love “passing new laws” because it is a promise you can always say you have kept. Whether you are actually enforcing those new laws is a whole other question.

Politically speaking, these pledges are a great rhetorical device because Rishi Sunak is essentially guaranteed to be able to say he has met three out of five of them. But in terms of moving the political terrain towards areas where the Conservatives could expose Labour’s vulnerabilities and win the next election, they are still some way short of where they might hope to be.

I saw Corsage at the cinema. Honestly I didn’t see the point: I think if you’re going to deconstruct and/or heavily fictionalise the life of the Empress Elisabeth of Austria there are more interesting ways to do it than this and it was simply far too long. Danny Leigh had a much better time than I did, but my suggestion would be to stay at home and watch The Menu (now available for streaming).

Britons less cautious over Covid than at any point during pandemic

News - March 16, 2022 0
Britons are taking fewer precautions towards Covid-19 than at any point during the pandemic, according to the latest polling data, as unease grows among...

Why 100-degree heat is so dangerous in the United Kingdom : NPR

What’s next for Twitter now that Elon Musk wants out?

News - July 10, 2022 0
He spoke on stage, essentially off the record, but a source in the room told CNN's chief media correspondent Brian Stelter that Musk tripled...

News - December 13, 2021 0
ABU DHABI, Dec 13 (Reuters) - Israeli Prime Minister Naftali Bennett will discuss Iran as well as bilateral issues during his landmark meeting with...
© 2022 Venture Current is a Flag Media LLC Publication. All Rights Reserved.
VC is part of the FLAG Token rewards network. Clients and partners can use FLAG Tokens for VC products and services.
VC runs 'Automatic' software. Stories posted here come from generic-topic Google news RSS feeds as well as client and partner-approved content.
If a story appears on this page that needs to be deleted due to licensing issues, please message us immediately so we can help you.