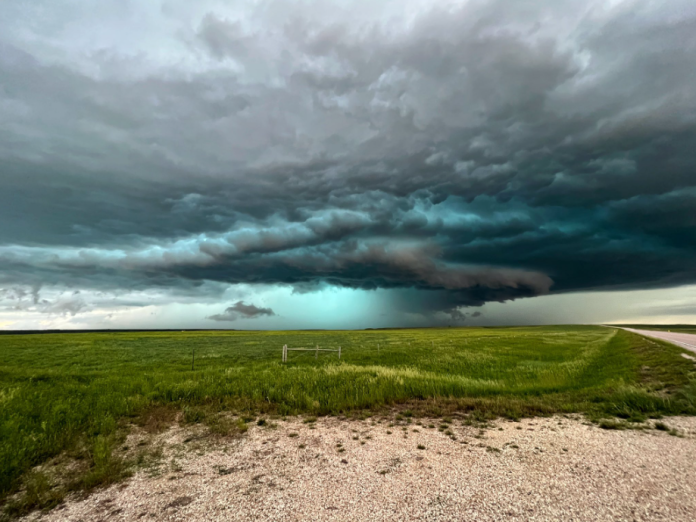 RAPID CITY, S.D. – 2022 was full of some pretty big weather events, even after a pretty slow start.

A blizzard swept thought the northern Great Plains and was mainly isolated to North Dakota, but the effects were felt in far northwesten South Dakota where Buffalo received almost a foot of snow.

A week and a half later, severe thunderstorms moved through the state, dropping 3.5-inch hail between Wall and Kadoka and 2-inch hail in the southern Black Hills. Over the next several hours, on the morning of the April 22, rain and hail turned to snow. The weather activity died down in May, but returned with full force in June. Thunderstorms dropping massive hail rocked the Black Hills and the surrounding plains over the course of three days.

During that span, 90+ mph winds were recorded on each of those days.

After a short break in thunderstorm activity, storms returned to the area in the beginning of July. These thunderstorms weren’t particularly strong, but they were tapping into monsoonal moisture coming in from the desert southwest.

That amount of moisture, combined with a stationary front, resulted in several inches of rain falling over Box Elder in under an hour. All of that rain caused extensive flooding throughout the area and damaged many homes.

Weather in the fall was fairly calm, but the beginning of winter greeted the area with a formidable blizzard. Over the course of five days, several feet of snow covered the Central Plains and the northern Black Hills.

50 inches of snow was reported at Terry Peak. There were also many wind gusts over 60 mph, which significantly reduced visibility. Mother Nature didn’t give us much of a break to recover from the previous storm before throwing us another curveball. The week following the December 12-16 blizzard, temperatures plummeted and the wind began to pick up.

Wind chills dropped to dangerously low temperatures, reaching -50 degrees in some areas. On the night of the December 21, a small amount of snow fell over the area. Because of the temperatures, there wasn’t a whole lot of moisture in the snow. This meant that it could be blown around by the wind more easily.

The blowing snow created ground blizzard conditions, dropping the visibility to near zero at times and making travel impossible for much of the state. There was so much blowing snow that it could even be seen by satellite. Around 1:30 a.m. on December 22, Rapid City broke its daily low temperature record when it got down to -18 degrees.

This combined with very strong winds meant that -60 degree wind chills were felt throughout the area and created a deadly situation of anyone who was stuck on the roads during the blizzard. Looking forward, it looks like South Dakota won’t get much of a break heading into 2023, with more winter weather on its way.

Here is what 2022 looked like for South Dakota weather events:

News - November 3, 2022 0
A Starbucks location in New York.Scott Mlyn | CNBCCheck out the companies making headlines after hours.Block — The mobile payment stock jumped 12% after...

News - August 6, 2021 0
Biotech startup EQRx on Friday said it is going public through a special-purpose acquisition company, or SPAC, deal that values the company at $3.65...

New coronavirus variant ‘Mu’ under close scrutiny by WHO

News - November 13, 2022 0
Comment on this storyCommentTwitter’s new owner Elon Musk is further gutting the teams that battle misinformation on the social media platform as outsourced moderators...
© 2022 Venture Current is a Flag Media LLC Publication. All Rights Reserved.
VC is part of the FLAG Token rewards network. Clients and partners can use FLAG Tokens for VC products and services.
VC runs 'Automatic' software. Stories posted here come from generic-topic Google news RSS feeds as well as client and partner-approved content.
If a story appears on this page that needs to be deleted due to licensing issues, please message us immediately so we can help you.