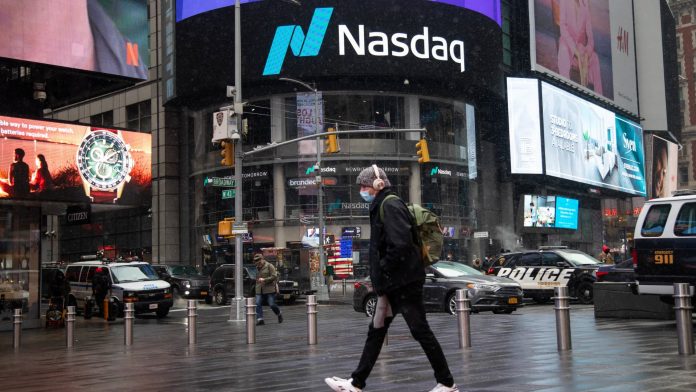 Tech stocks took a whipping in 2022. The Nasdaq Composite tumbled more than 30%, giving it the unfortunate distinction of being the worst performer among the major U.S. indices. But top tech analyst Mark Mahaney has a positive outlook on the sector. “Going forward, we are tactically constructive,” Mahaney, head of internet research at Evercore ISI , told CNBC “Squawk Box Asia” on Thursday. “We have seen the de-risking of multiples. They have come down materially … We have seen a de-risking of [earnings] estimates; they can still come down more, but they have come down materially. We have seen a good number of companies take cost actions, reduce their workforces to better manage their costs. So there’s a good set-up here.” Tech investors should remain selective this year, however, according to Mahaney. He identified three key attributes in evaluating stocks: companies with revenue models that are reasonably recession resilient; firms with new product cycles; and those that have undertaken cost-reduction measures. Top stock picks Mahaney said Netflix is “at the top of my list of stocks that we are recommending this year.” In a note on Dec. 11, he described the company as the “global streaming leader” for revenue, subscriber base and content quality. He believes the introduction of ad-supported tiers is “game-changing” and lauded its rapid rollout as a “pretty incredible, impressive accomplishment.” He has a price target of $340 on the stock, which represents a 9.7% potential upside to the stock’s closing price on Jan. 5. Ride-hailing behemoth Uber also makes Mahaney’s list. “One of the reasons I like Uber is that it has just hit this free cash flow inflection point,” he told CNBC last week. “They finally reached positive free cash flow for the first time in the June quarter and repeated that trick in the September quarter. If they continue to do that and if they can grow into what they think they can generate, which is about $4 billion in free cash flow by 2024, I think you are going to see the stock go higher.” Mahaney has a price target of $75 on Uber, giving it upside of a whopping 193% to its closing price on Jan. 5. His top pick in the small-and-mid cap space is Nasdaq-listed software company Wix . The Israeli firm is “one of the leaders” in a “highly competitive” sector, according to Mahaney, who wrote in December that he expects the company to accelerate revenue growth and free cash flow margin expansion this year. He expects the fourth quarter to be the “most profitable quarter” in Wix’s history. Mahaney has a price target of $115 on the stock – an implied potential upside of 53% to its Jan. 5 closing price. — CNBC’s Naman Tandon contributed to reporting

News - September 22, 2022 0
Conservative MPs warned of a public backlash on Thursday after the UK government lifted a moratorium on fracking for natural gas in England that...

Star-studded startups: Five celebrities who are betting on Indian companies

News - September 27, 2022 0
For many college students, recent graduates and early career professionals, navigating the current job market is a tough task. Though experts say workers have...

News - May 13, 2022 0
North Korea said on Friday that six people have died and 350,000 have been treated since April for an “obscure febrile disease”, a day...
© 2022 Venture Current is a Flag Media LLC Publication. All Rights Reserved.
VC is part of the FLAG Token rewards network. Clients and partners can use FLAG Tokens for VC products and services.
VC runs 'Automatic' software. Stories posted here come from generic-topic Google news RSS feeds as well as client and partner-approved content.
If a story appears on this page that needs to be deleted due to licensing issues, please message us immediately so we can help you.