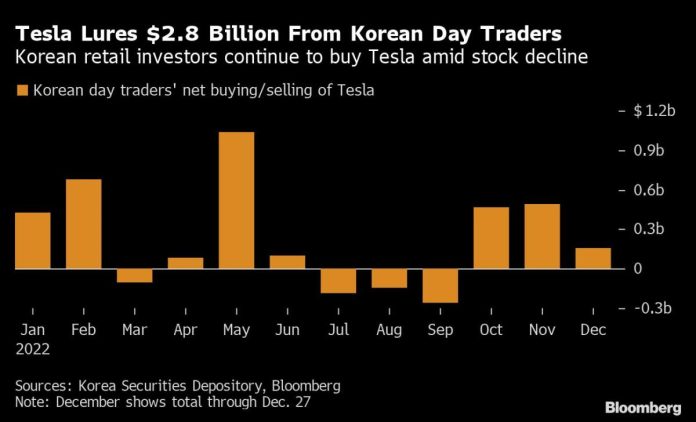 (Bloomberg) — South Korean retail investors have bought a net $2.8 billion worth of Tesla Inc. stock this year amid the electric-vehicle maker’s worst slump on record.

Most Read from Bloomberg

Day traders have added $160 million in Tesla shares this month through Dec. 27, on track for a third month of net purchases, according to data from Korea Securities Depository. They continued to buy even as the stock has tumbled 44% in December, headed for its worst-ever month.

Tesla remains the most popular overseas stock among Korean retail traders, who sharply increased investment during the pandemic. Elon Musk has built a devoted fan base in the Asian nation, luring dip-buyers in its 2022 collapse on top of those who piled in as it soared over the previous two years.

Tesla supplier LG Energy Solution Ltd. has been a beneficiary as well, with Korean mom-and-pop investors pouring a record amount of funds into the battery maker’s initial public offering in January. LG Energy’s shares are up 46% since its debut.

South Korea’s retail investors has also remained loyal to their favorite domestic stock, Samsung Electronics Co., buying a net $12.3 billion so far in 2022. Shares of the world’s largest memory maker are down 28% this year amid the global tech selloff.

(Updates share moves as of market close Wednesday. An earlier version of this story corrected the spelling of Tesla in the fourth paragraph)

Most Read from Bloomberg Businessweek

News - September 4, 2021 0
The world’s largest ride-hailing company said there was no truth to Beijing’s proposal, which would give state-run companies control of the firm. Source

News - August 24, 2022 0
Nuclear power is a sensitive topic in Japan after the 2011 Fukushima disaster. TOKYO: Japan's prime minister on Wednesday called for a push to revive...

Weather warnings in US as Arctic freeze grips northern hemisphere

News - December 24, 2022 0
A bitterly cold Arctic air mass has caused temperatures to plummet across much of the northern hemisphere, where parts of the US, Canada and...

‘Nowhere Else To Go But Up’: Jim Cramer Calls The Bottom In Amazon, Meta...

News - June 1, 2022 0
Jim Cramer is calling a bottom in three popular FAANG names that have been beaten down in 2022.What Happened: Cramer highlighted Amazon.com Inc AMZN, Meta...

News - May 18, 2022 0
© 2022 Venture Current is a Flag Media LLC Publication. All Rights Reserved.
VC is part of the FLAG Token rewards network. Clients and partners can use FLAG Tokens for VC products and services.
VC runs 'Automatic' software. Stories posted here come from generic-topic Google news RSS feeds as well as client and partner-approved content.
If a story appears on this page that needs to be deleted due to licensing issues, please message us immediately so we can help you.