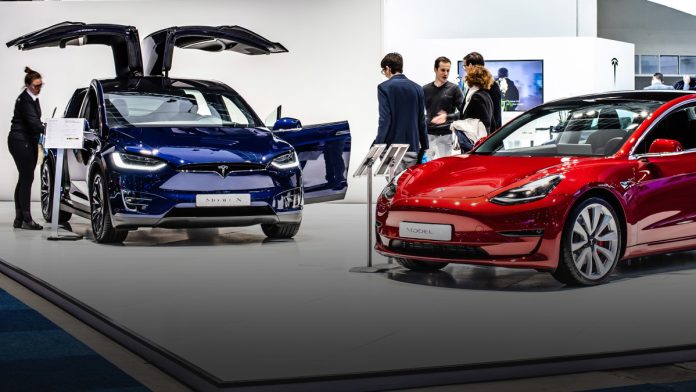 Gary Davis and his husband, Jim, had decided they would buy a Model Y SUV from Tesla by March of this year.

But in December Chief Executive Elon Musk announced an unprecedented discount of $7,500, plus 10,000 miles of free supercharging, for anyone who ordered and took delivery of a Model 3 sedan or a Model Y SUV before Jan. 1.

Gary, 65, a retired IBM employee, and Jim figured they got a great deal. After doing the math, they believed that the discount offered by the electric-vehicle leader was more attractive than the federal tax credit, which was to come into effect Jan. 1. And not all Model Y variants were eligible for the federal tax credit.

“We live in New York, we looked in New York, but we happen to be spending the holidays with family in Indiana,” Davis, who lives in Hudson, N.Y., said. “So we broadened our search to look for what was available in about an hour outside of where we were in Indiana.”

“We found a car on the 30th [and] put the order in online to buy the Model Y 2023 in the gray color. It was the car we were going to buy; we didn’t think we were ready to buy one.

“But because of this promotion, we said, ‘well, you know what, if we’re gonna buy it in the first quarter of next year, let’s just buy it now.’ So we did. We placed the order and we picked it up literally the next day.”

Final Purchase Price: Under $60K. And Then…

According to their motor-vehicle purchase agreement, Davis and his husband bought a Model Y Long Range Dual Motor All-Wheel Drive from a Tesla store in Westmont, Ill., on Dec.30. The starting price was $67,440, but after the discount, the final cost was $59,940.

But on Jan. 12, on the sites dedicated to the Models 3 and Y, Tesla announced price reductions of 7% to 20%. The move enabled buyers of these vehicles — Tesla’s most popular cars — to claim the federal tax credit of $7,500.

Davis and his husband are livid.

“We were, like, ‘well, wait, what happens to those of us that bought a car like 15 days ago? This doesn’t seem fair,'” Davis says.

“But if you buy certain things in many retail settings — I understand car dealerships aren’t necessarily typical retail settings — [there’s] a window when people recognize that you just bought it and you should have some compensation.”

The Model Y Long Range’s new base price — which is valid through March 31 — is $53,490, down $13,950 from the original price, according to the Tesla website. Davis therefore estimates that they paid at least $5,000 more than they would have if they’d waited just a few days.

They contacted all the Tesla people they spoke with throughout the purchase process, including the person who delivered the car.

But the response of this last employee only sharpened their disappointment.

‘No Refund’ on Cars Delivered Before Jan. 12

“No refund will be given to any deliveries taken before 01/12,” the employee, Sofy Aguilera, told them by email on Jan. 14. (TheStreet has seen the email.)

Tesla did not respond to a request for comment.

Davis and Jim aren’t the only ones angry at Tesla. A petition on Change.org has been launched by other customers who, like them, bought their Teslas, took delivery before Jan. 12, and feel they were overcharged.

“Tesla’s decision to go with a phased discount approach ($3750 > $7500 > $13000) within a 6 week rather than a straightforward, upfront $13k discount from the get go … brings short term profit gains … but long term customer pain,” commented a customer who signed the petition.

“It leaves a bad taste in our mouths because it feels all too familiar with the experiences we’ve had with traditional car dealerships,” the customer added.

The petition at last check had 3,737 signatures — three-quarters of its 5,000-signature goal. It claims to represent customers who purchased Teslas in Q4 2022.

The petitioner requests that Tesla should give “a free full self driving 1 year trial” or a discount to affected customers who purchased the driving-assistance system. The carmaker could also offer free supercharging miles, the petition suggests.

Davis says he and his husband would be happy if Tesla would make one of the goodwill gestures the petition suggests or if it would provide credits that owners could use when they, for example, replace air filters or rotate tires.

“There could be things that we could be satisfied with,” he said. “I think we’d go a long way to mending our feelings about Tesla at the moment. We still like the car. We don’t hate the car. We just aren’t happy with the way Tesla was handling this.

Military briefing: fear of deployment of chemical weapons in Ukraine

News - March 12, 2022 0
As the west steps up its warnings that Russia could use chemical weapons in Ukraine, a broader fear lurks beneath the surface: the same...

News - January 6, 2023 0
Republican Kevin McCarthy convinced a large number of party rebels to fall in line behind his bid to serve as Speaker of the House...

We don’t see a bear market recession in terms of earnings next year: Brian...

News - January 2, 2023 0
WorldThe fresh attack came as Kyiv repelled another drone swarm on the Ukrainian capital Source
© 2022 Venture Current is a Flag Media LLC Publication. All Rights Reserved.
VC is part of the FLAG Token rewards network. Clients and partners can use FLAG Tokens for VC products and services.
VC runs 'Automatic' software. Stories posted here come from generic-topic Google news RSS feeds as well as client and partner-approved content.
If a story appears on this page that needs to be deleted due to licensing issues, please message us immediately so we can help you.