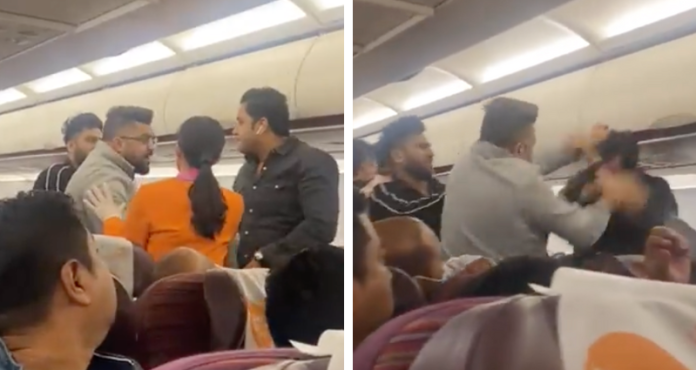 A video of passengers fighting on a flight over a reclining seat went viral on Wednesday, prompting a formal apology by the airline the next day.

In the video, one male passenger can be seen verbally arguing with an increasing number of men. Although a female crew member attempts to calm the agitated group down, she backs out of the way once the men become physically aggressive. As the passengers look on, the lone man attempts to defend himself against the wave of attacks from the group of men around him.

The Bangkok-Kolkata flight took place on Tuesday, with the clip of the incident being uploaded by Saurabh Sinha on Wednesday. As of this writing, the video has over 3 million views and 6,200 likes.

India’s Bureau of Civil Aviation Security and Directorate General of Civil Aviation both requested details from Smile Airways regarding the altercation, but the nature of the foreign airline and state of registry, Thailand, presented an issue of jurisdiction.

The altercation occurred after the lone male passenger in seat 37C refused to upright his seat in accordance with the crew’s safety instructions when the aircraft was preparing for takeoff, reports Times of India. Although crew members warned that the man’s actions would be reported to the pilot, the passenger reportedly justified his refusal with claims of having a backache and egged the flight staff on, retorting, “OK, tell [the pilot]. I am not scared.” The passengers in seats 38A, B and C confronted the man for his behavior, leading to the physical brawl.

Consequently, the flight was delayed but “continued as usual” after the involved passengers calmed down, the airline reports. However, the passengers remained under watch, and passenger 37C was denied alcohol.

The passengers in 37A and B were given the option for a seat change but they declined. According to the airline, no one was injured.

19 Android Settings You May Not Know About

News - October 2, 2022 0
If you're a typical smartphone user, you average almost five hours a day on your phone now. But beyond video and social media apps,...

New report suggests gas prices could soon be on their way down | Southeastern...

News - September 5, 2021 0
The new head of the Serbian Orthodox Church in Montenegro has been inaugurated, arriving by helicopter under the protection of police who dispersed protesters...

News - August 7, 2021 0
© 2022 Venture Current is a Flag Media LLC Publication. All Rights Reserved.
VC is part of the FLAG Token rewards network. Clients and partners can use FLAG Tokens for VC products and services.
VC runs 'Automatic' software. Stories posted here come from generic-topic Google news RSS feeds as well as client and partner-approved content.
If a story appears on this page that needs to be deleted due to licensing issues, please message us immediately so we can help you.