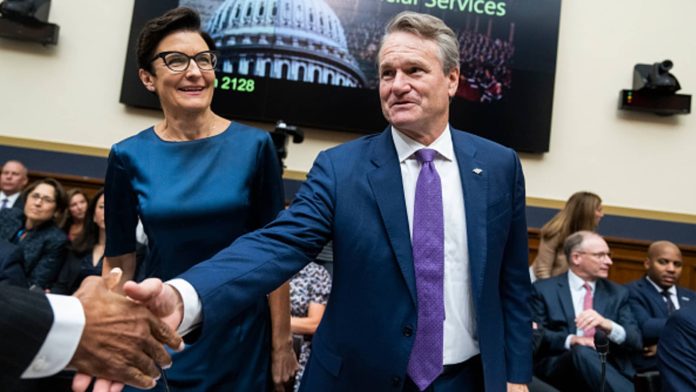 Tech stocks have been humbled after years of outperformance, and now there’s one more comedown for the recent market leaders: losing the top ranking in the 2023 Just 100 list, an annual analysis from nonprofit Just Capital on the issues that Americans say matter most to them when it comes to corporate leadership.

Bank of America ranks No. 1 on the 2023 Just 100 list, and it’s not alone among peers. Banks made the most progress of any sector in the Just 100 this year, as increased focused on worker issues, and wages in particular, boosted financials. On last year’s list, the top four spots all went to tech companies.

It’s the first time a bank has taken the No. 1 spot in the seven-year history of the list.

Martin Whittaker, founding CEO of Just Capital, said it was bit of surprise to see the banks perform so well.

“They employ a lot of people who are tellers and not in a tech ‘high wage’ category and they have lots of bricks and mortar assets, a high physical footprint and environmental footprint,” Whittaker said. “And large banks tended to be mired in controversies, which Bank of America is not free from, but you get a lot more consumer-oriented issues, and where they have foundered in past is this breadth of issues which traditionally your big tech didn’t have,” he said.

But the banks have been trending up in recent years. “By all accounts, Brian Moynihan is an authentic ‘just’ corporate leader,” Whittaker said. “Banks have been steadily improving their game and that’s the standout,” he said of this year’s Just 100 list. “We feel pretty good, because I remember early on in rankings we would get a list of tech companies and people would say, ‘They are rich so they can afford to do all of this.”

Just Capital polls the American public annually and adjusts its methodology for the list based on the priorities cited by the public. Paying a fair, living wage continues to be the top-most prioritized issue, for the third consecutive year, comprising 21% of companies’ score in 2023, and it has more than doubled from 9% over the past three years. While environmental, social and governance analysis has become politicized, Just Capital’s polling finds broad consensus across all demographic and political cohorts — liberal, conservative, high-income, low-income, men, women, younger generations, older generations, and white, Black, and Hispanic Americans — on the No. 1 issue.

Disclosing a nationwide minimum wage for all employees, a new data point introduced to the list this year, accounted for approximately half the average rank gains for banks in 2023. Bank of America had the second-highest minimum wage among all 951 companies in the Russell 1000 that were reviewed, at $22 per hour. (Bank of America has also pledged to continue to raise its minimum wage to $25 per hour by 2025, but that was not factored into the rankings.) The highest minimum wage disclosed is from First Republic Bank, at $30 per hour. It moved up from No. 374 last year to No. 71, making the cut for the Just 100 list.

Overall, only 9% of Russell 1000 companies disclose a minimum wage.

What Bank of America’s rise means

Even in losing the top spot as the American public’s focus on workers increases — and at a time when the major tech companies are laying off rather than adding workers — the tech industry did not see a significant decline overall on the list. On last year’s list, the top four spots all went to tech, led by Alphabet. This year’s top 10 still included five tech companies: NVIDIA, Microsoft, Hewlett Packard Enterprise, Apple, and Intel. Alphabet fell to No. 12.

But banks were the most represented industry in the Just 100 this year: 14 companies, or 34.1% of banks in the Russell 1000, versus six companies in 2022. The eight banks joining the Just 100 compare to an average across all other industries of one or two companies entering or leaving the list annually.

It wasn’t only wages that boosted the banks. Domestic jobs and job creation, the second-most important issue in the annual ranking, was an area in which banks saw an average ranking increase of 127 spots.

“Bank of America is a bank with outlets all over the country and shows up more in Main Street American life than big tech firms, and that plays to the narrative that this is not just the realm of progressive tech,” Whittaker said.

Other worker metrics that helped Bank of America: it offers an extensive benefit package to its employees, including 16 weeks of paid parental leave for both primary and secondary caregivers (one of 10% of Russell 1000 companies that offer at least 12 weeks of paid leave for both caregivers), flexible work arrangement scheduling, and backup dependent care. It conducts pay equity analyses and discloses its results, one of only 14% of companies in the Russell 1000 to do so. And it is among the 34% of companies in the Russell 1000 that disclose detailed workforce demographics data by race and gender.

“Bank of America has always been prominent in the stakeholder dialogue and a leader in bringing the industry forward,” Whittaker said.

Chinese Communists shun women as men hoard all the power

News - October 21, 2022 0
Jiang Qing married the most powerful man in China, created revolutionary operas and was celebrated for bringing to life films by the country’s greatest...

News - January 23, 2022 0
Spooked in large part by rising bond yields, investors continued to dump stocks last week, extending early-year losses that have taken many off guard...
© 2022 Venture Current is a Flag Media LLC Publication. All Rights Reserved.
VC is part of the FLAG Token rewards network. Clients and partners can use FLAG Tokens for VC products and services.
VC runs 'Automatic' software. Stories posted here come from generic-topic Google news RSS feeds as well as client and partner-approved content.
If a story appears on this page that needs to be deleted due to licensing issues, please message us immediately so we can help you.