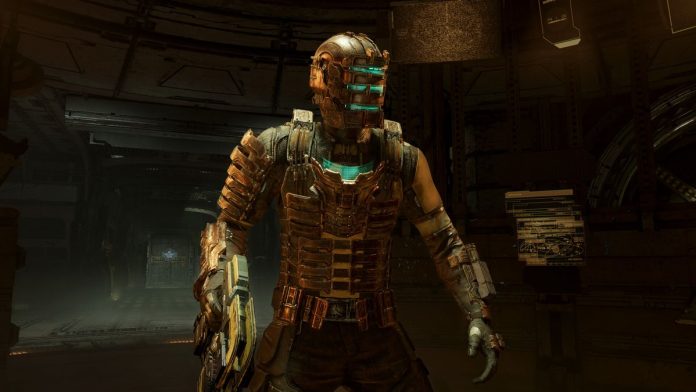 The real test of a great horror game is playing it in the dark. Things that don’t seem too bad while friendly Mr. Daystar is shining through the window become worrying at night. The last time I got so creeped out I needed to save my game and do something else before bed was Signalis, and I remember doing the same thing in the scarier levels of Thief: The Dark Project. With luck, the Dead Space remake might be another for that list.

“When I’m playing it at night, I can’t play it with headphones. It’s just too fucking scary,” technical director David Robillard told PLAY Magazine (opens in new tab) in a recent interview. “Just the amount of realism and, again, atmosphere. Not just visually, right? In the way we handle sound, ambience, effects, having systems that will try to spook you.”

As Tyler Wilde mentioned when he went hands-on with the Dead Space remake, one of the changes from the original is the addition of an AI director. “Throughout the remake, an ‘intensity AI’ will mix surprise necromorph attacks in with the pre-scripted ones,” he wrote, “and otherwise try to spook you by messing with the lights and sounds. A room that was well-lit in one playthrough might be dark on a second, for instance.”

Other changes from the original include a voiced protagonist, the ability to detach from the ship and fly around with thrusters in zero-gravity sections, some extra puzzles, and the absence of loading screens. The team at Motive Studio takes pains to point out that it’s still the same game in spite of the changes and additions, however.

“The initial part of the game, like, if you play them side by side, they’re extremely similar,” senior producer Phillipe Ducharme told PLAY. “But then as you go through some of the chapters, there’s some objectives that were not as popular. We wanted to make sure that if we were making a change, it was actually to reflect on one of our key pillars […] not just make changes because we thought we knew better than the original team, because they did an amazing job.”

Robillard brought it back to the subject of scares, saying, “We needed to find a way to fill those gaps, so that the player doesn’t feel like ‘Oh, I’ve been here, it’s fine, I’m safe’. No, you’re never safe. Like, you will get jumped. Somebody wants your lunch money, and they’re not friendly.”

When choosing where to make these tweaks, the deciding factor was whether it affected immersion. “Even when we started this project, I did several walkthroughs of the original game to make sure that I had it really mapped out in my mind—and immersion was one of the strongest selling points,” said Ducharme. “For us, anything that we could do to try to enhance that immersion was an automatic yes.”

It seems like every genre in videogames is remake central right now, and after the success of Resident Evil 2’s remake it’s no surprise that horror is following suit. We’ve got Resident Evil 4’s remake coming on March 24, and remakes of Silent Hill 2 and System Shock on the way as well. It remains to be seen whether any of them make us feel as tense as the originals did.

The Dead Space remake will be out on January 27. On PC it’ll be available on Steam, and natively too. No Origin required.

How can investors hedge against inflation?

News - December 4, 2021 0
Bitcoin (BTC) was created in the aftermath of the 2008 financial crisis and planned to solve the problems created by loose monetary policies. The...

Wild Boars Are Running Wild On The Streets Of Rome In Search Of Food...

News - February 21, 2022 0
EUR/USD refreshes intraday high...
© 2022 Venture Current is a Flag Media LLC Publication. All Rights Reserved.
VC is part of the FLAG Token rewards network. Clients and partners can use FLAG Tokens for VC products and services.
VC runs 'Automatic' software. Stories posted here come from generic-topic Google news RSS feeds as well as client and partner-approved content.
If a story appears on this page that needs to be deleted due to licensing issues, please message us immediately so we can help you.