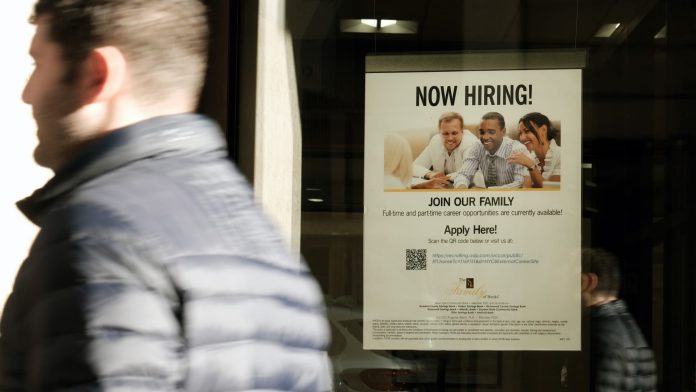 A ‘help wanted’ sign is displayed in a window of a store in Manhattan on December 02, 2022 in New York City.

As far as jobs reports go, November’s wasn’t exactly what the Federal Reserve was looking for.

A higher-than-expected payrolls number and a hot wage reading that was twice what Wall Street had forecast only add to the delicate tightrope walk the Fed has to navigate.

In normal times, a strong jobs market and surging worker paychecks would be considered high-class problems. But as the central bank seeks to stem persistent and troublesome inflation, this is too much of a good thing.

“The Fed can ill afford to take its foot off the gas at this point for fear that inflation expectations will rebound higher,” wrote Jefferies chief financial economist Aneta Markowska in a post-nonfarm payrolls analysis in line with most of Wall Street Friday. “Wage growth remains consistent with inflation near 4%, and it shows how much more work the Fed still needs to do.”

All of those things together add up to a prescription of more of the same for the Fed — continued interest rate hikes, even if they’re a bit smaller than the three-quarter percentage point per meeting run the central bank has been on since June.

The numbers would indicate that 3.75 percentage points worth of rate increases have so far had little impact on labor market conditions.

“We really aren’t seeing the impact of the Fed’s policy on the labor market yet, and that’s concerning if the Fed is viewing job growth as a key indicator for their efforts,” said Elizabeth Crofoot, senior economist at Lightcast, a labor market analytics firm.

Much of the Street analysis after the report was viewed through the prism of comments Fed Chairman Jerome Powell made Wednesday. The central bank chief outlined a set of criteria he was watching for clues about when inflation will come down.

Among them were supply chain issues, housing growth, and labor cost, particularly wages. He also went about setting caveats on a few issues, such as his focus on services inflation minus housing, which he thinks will pull back on its own next year.

“The labor market, which is especially important for inflation in core services ex housing, shows only tentative signs of rebalancing, and wage growth remains well above levels that would be consistent with 2 percent inflation over time,” Powell said. “Despite some promising developments, we have a long way to go in restoring price stability.”

In a speech at the Brookings Institution, he said he expected the Fed could cut the size of its rate hikes — the part that markets seemed to hear as grounds for a post-Powell rally. He added that the Fed likely would have to take rates up higher than previously thought and leave them there for an extended period, which was the part the market seemed to ignore.

“The November employment report … is precisely what Chair Powell told us earlier this week he was most worried about,” said Joseph LaVorgna, chief U.S. economist at SMBC Nikko Securities. “Wages are rising more than productivity, as labor supply continues to shrink. To restore labor demand and supply, monetary policy must become more restrictive and remain there for an extended period.”

The path to ‘Goldilocks’

To be sure, all is not lost.

Powell said he still sees a path to a “soft landing” for the economy. That outcome probably looks something like either no recession or just a shallow one, nevertheless accompanied by an extended period of below-trend growth and at least some upward pressure on unemployment.

Getting there, however, likely will require almost a perfect storm of circumstances: A reduction in labor demand without mass layoffs, continued easing in supply chain bottlenecks, a cessation of hostilities in Ukraine and a reversal in the upward trend of housing costs, particularly rents.

There is some indication the labor market is cooling. The Labor Department’s household survey, which is used to calculate the unemployment rate, showed a decline of 138,000 in those saying they are working. Some economists think the household survey and the establishment survey, which counts jobs rather than workers, could converge soon and show a more muted employment picture.

“The biggest disappointment was the strong wage growth number,” Mark Zandi, chief economist at Moody’s Analytics, said in an interview. “We’ve been at 5% since the beginning of the year. We’re not going anywhere fast, and that needs to come down. That’s the thing we need to most worry about.”

Still, Zandi said he doubts Powell was too upset over Friday’s numbers.

“The inflation outlook, while very uncertain at best, has a path forward that is consistent with a Goldilocks scenario,” Zandi said. “263,000 vs 200,000 — that’s not a meaningful difference.”

News - September 5, 2022 0
Liz Truss will enter Downing Street on Tuesday after a bruising battle to become the UK’s next prime minister and will finalise a two-year...

Elon Musk sells $3.58B worth of Tesla shares

News - January 27, 2022 0
China has offered support for Russia in the face of its stand-off with the US and Nato over Ukraine, saying Moscow had “reasonable security...
© 2022 Venture Current is a Flag Media LLC Publication. All Rights Reserved.
VC is part of the FLAG Token rewards network. Clients and partners can use FLAG Tokens for VC products and services.
VC runs 'Automatic' software. Stories posted here come from generic-topic Google news RSS feeds as well as client and partner-approved content.
If a story appears on this page that needs to be deleted due to licensing issues, please message us immediately so we can help you.