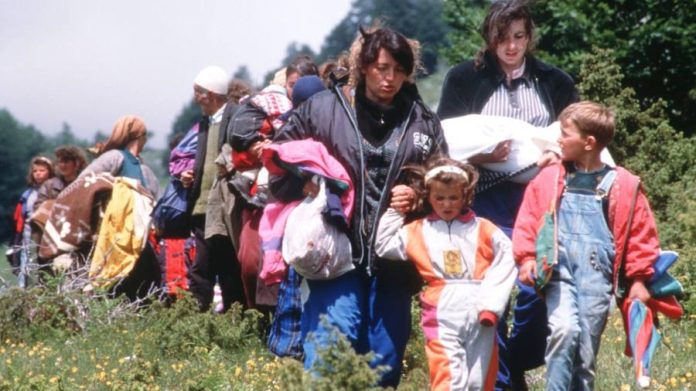 The writer is author of ‘Free’

“Could you tell us how exactly you got here?” The man who sat in front of me, carrying a little girl in his lap, muttered something I didn’t understand. His head hung low, his gaze fixed on the brown tiles. He had a worn-out look, like many others I had seen that morning. “I am from Poklek,” he said. “Serbian soldiers burnt down the houses and we walked until we reached Kukës, then . . . ” He stopped exhausted.

In 1999, during Nato’s intervention in former Yugoslavia, hundreds of thousands of Kosovan refugees crossed the border into Albania. I worked briefly for the Red Cross, officially as a translator, though my real job was to help distinguish between “authentic” and “fake” Kosovans. The former were fleeing from Slobodan Milošević’s campaign of ethnic cleansing. The latter were desperate Albanians pretending to be Kosovans, so they could receive free food. Since many IDs had been destroyed, only a local could tell the difference.

“He says he’s from a village in Kosovo,” I translated to my boss. “There’s something in his accent, though, it just doesn’t sound right.” The man broke down. “I’m unemployed,” he begged. “I have four children. What difference does a bag of rice make. The stomach’s the same.” I shook my head. “Can we at least have some biscuits?” the little girl quipped. “The boxes are sealed,” I said, and saw her eyes fill with tears.

Back then, I felt part of a noble mission: to protect the boundary between truth and lies, refugees and fraudsters, genuine need and manipulation of the system. This is probably how most people who reflect on immigration feel, drawing a line between deserving and undeserving recipients of assistance. The distinction between genuine asylum seekers and illegal economic migrants is crucial in deciding who to admit and who to exclude. The former are seen as victims. The latter as criminals.

“Is Albania a safe country?” I am now asked. “If so, why should Albanians be accepted in the UK?”

Albania was technically safe in 1999, when hundreds of thousands of Kosovan refugees arrived. Still, most people were desperate, unable to recover from the collapse of fraudulent financial schemes in which, according to the IMF, two-thirds of the population had invested. Those who tried to flee either died at sea or were sent straight back. After all, they were economic migrants, although the same people would have generally been defined as asylum seekers had communism not recently fallen.

A significant part of the Albanian diaspora in the UK arrived then. They were victims of the same collapse: economic migrants disguised as Kosovan refugees. When their mothers died in Albania, they couldn’t return to bury them. They had no links with Kosovo. In the UK, no amnesty was issued and some fell prey to organised crime. Alienated in three countries, they lived in the shadow of a system reluctant to forgive.

On the surface, the distinction between a refugee and an economic migrant makes sense. For the former, the contractual bond with the country of birth has been irreparably broken. To offer them shelter is not only to alleviate the burden of suffering, but to symbolically restore the democratic meaning of political belonging.

But for political representation to work, formal rules are not enough. A patient who perishes waiting for an ambulance is also victim of a broken system. So is the elderly pensioner who freezes to death at home. So is an unemployed man unable to feed his children. We hardly think of these as systemic failures because we equate democracy with formal procedures: the right to vote, to associate with others, to speak freely. With economic issues, though, we tend to blame individuals rather than institutions.

Taking responsibility for economic migration is more demanding than offering shelter to asylum seekers. Today’s vulnerable Albanians are, simultaneously, victims of communist isolation and its collapse, of the shock therapy inflicted during the nineties, of the great financial crisis, of the pandemic, and now of the inflation and energy crisis. In the future, they will have to reckon with environmental emergencies. One cannot reduce their plight to simplistic distinctions between successful and failed states or to crude imperatives about fighting authoritarianism and establishing the rule of law. Migration is not about who gets in and who stays out, but about who reaps the benefits of globalisation and who bears the burden.

I have come to think of my job for the Red Cross with a growing sense of unease, even shame. Boundaries, both those we cross geographically and those we construct mentally, are always a matter of convention, often uncritically inherited from the narratives of privileged elites in privileged states. So is the distinction between economic migrants and political asylum seekers: legally plausible, of course, but still morally haunting.

Shell is having a use-of-cash flow crisis

Would you relocate for $10K? Should you?

News - March 15, 2022 0
ORO GRANDE, Calif. (VVNG.com) –A fast-moving wind-driven fire burning near the Mojave River in the community of Oro Grande jumped from 3 acres to...
© 2022 Venture Current is a Flag Media LLC Publication. All Rights Reserved.
VC is part of the FLAG Token rewards network. Clients and partners can use FLAG Tokens for VC products and services.
VC runs 'Automatic' software. Stories posted here come from generic-topic Google news RSS feeds as well as client and partner-approved content.
If a story appears on this page that needs to be deleted due to licensing issues, please message us immediately so we can help you.