In a market monopolised for decades by a stodgy state broadcaster, Indian entrepreneur Subhash Chandra was a trailblazing pioneer of contemporary television entertainment.

Today, Chandra, a 70-year-old member of the upper house of parliament, is at the centre of his own drama playing out like an Indian adaptation of HBO’s Succession, as he battles to keep his son Punit Goenka at the helm of Zee — now India’s largest listed media company — in the face of a shareholder revolt.

Unhappy at Zee’s languishing share price in a buoyant Indian market, US investment group Invesco, which is the company’s largest shareholder with an 18 per cent stake, last month began a campaign to oust Goenka as CEO and overhaul the board, citing corporate governance concerns.

Chandra, whose family now owns just 4 per cent of Zee, down from 35 per cent at the start of 2019, has challenged Invesco’s call for an extraordinary general meeting in court, and invoked nationalist sentiments against the US group.

The showdown is a critical test of the ability of shareholders to hold influential Indian entrepreneurs to account when they fail to deliver on investor expectations.

“The message here is, if you are running a business with a very relatively small equity holding, you better ensure that it’s a well-run business,” said Amit Tandon, managing director of Institutional Investor Advisory Services, which has repeatedly raised concerns about Zee’s governance.

The outcome will also have significant implications for India’s fast-growing but still fragmented entertainment market, where big international groups including Disney and Sony, streaming services and local rivals are all jostling for position. Companies interested in a potential deal with Zee include Sony and Mukesh Ambani’s Reliance Industries.

Zee is not a company — it is an emotion

The battle for control of Zee, said one investor, “is going to be huge. It can change the whole way the entertainment sector works”.

Zee’s formula of producing cheap and cheerful mass market entertainment made it a cash cow and one of India’s most popular suite of channels: it accounts for 19 per cent of the country’s TV viewership, second only to its long-term rival Star, which was bought by Disney in 2019.

“Zee is attractive for a lot of people,” Tandon said. “It’s a good business that is generating cash and they have got a very strong hold on the Indian market.”

Paritosh Joshi, a former Star executive said battles to buy media businesses in India had been fought with “teeth and blood”.

Chandra, who has close ties to the ruling Bharatiya Janata party, ran into financial trouble after diversifying into infrastructure, and in 2019 was forced to sell most of his Zee holding to repay bank loans.

Invesco, a long-term shareholder, picked up an 11 per cent stake in Zee from Chandra, raising its stake to 18 per cent, while Chandra and Goenka remained as chair and chief executive, respectively.

However, its relations with the founding family have cooled over the past two years, as Zee’s share price dropped and it became concerned about how the business was being run.

Invesco went public with its worries on September 11, demanding Zee call an EGM for shareholders to vote on the removal of Goenka and a board overhaul.

The board rejected its call and in a primetime appearance on Zee News, Chandra accused Invesco of acting “illegally and unlawfully,” and claimed it was acting on behalf of another unnamed entity eager to grab the business.

“There has to be someone behind this,” Chandra said. “This is a clear-cut case of a takeover by a company in a clandestine manner.”

In a subsequent letter to shareholders, published this week, Invesco insisted that “the conduct of an EGM is a shareholder right”. The letter also claimed the current board had “permitted Zee’s deep entanglement with the financial distress of its founding family”, resulting in the destruction of shareholder value.

Invesco said it had urged Zee’s management to distance the business from “the long shadow” of the founding family’s other interests and had broached the potential for strategic alliances.

But because nothing had changed Zee remained “a highly-undervalued asset, mired in innuendo and financial volatility” the shareholder letter said.

A suit from Sony

Just 10 days after Invesco’s initial revolt, Zee unveiled plans for a $1.6bn merger with Sony that would give the Japanese company 53 per cent of the combined entity, leaving Goenka as CEO. As part of a “non-compete” clause in the deal, Sony would also give the family another 2 per cent stake.

Invesco was sharply critical of the proposal, which it says favours the founders at the expense of other shareholders, though it said a new board could consider a revised proposal from Sony or other potential strategic partners.

Invesco said on Wednesday that Goenka held talks with Reliance on a potential merger this year but the discussions did not lead to an agreement.

“The recent interest of Sony, as well as the previous interest of Reliance, should be a reminder to all Zee shareholders of the enormous value that lies in this company, much in contrast to its dismal performance,” Invesco said. 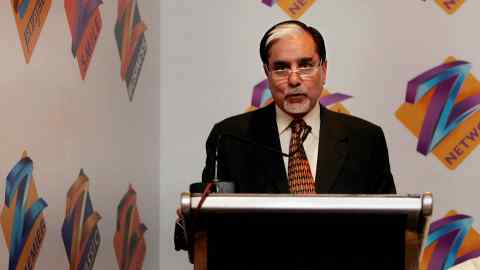 Sony declined to comment on its proposed deal with Zee but people close to the company said that while the deal appeared complex and with added elements of drama, the group had previously completed other international media deals hit by unpredictable developments.

In a statement in late September, Sony said it had begun a 90-day due diligence process on Zee. People familiar with the company’s negotiations said it was still working within that timeframe, and would remain “a spectator” of the situation with Invesco.

People close to Sony said it was operating on the assumption that when the deal was eventually done, the Japanese company would be working with the founding family. But they also noted that Sony did have experienced management in India, which would allow the deal to work without the family’s involvement.

Taking on Zee without the founders, these people said, was not the preferred option, but if there was no other choice, a deal would still be attractive and do-able.

Meanwhile, both Invesco and Chandra are dug in for a protracted battle.

“Zee is not a company — it is an emotion,” Chandra told Zee viewers last week. “The audience is the owner. If they want to let the company go, I can’t do anything. But I trust them — and the government — that they will not let this happen.”

Asylum under threat at Europe’s borders

Biden domestic agenda threatened by rift in own party

News - March 4, 2022 0
Late-stage tech startups are facing a changing public market environment, but their early-stage counterparts are in a different world altogether. The cohort has had...

News - March 12, 2022 0
As the war in Ukraine grinds on, the tide of people seeking refuge from Russia’s assault is rapidly developing into Europe’s biggest wave of...

News - July 24, 2022 0
Comment on this storyCommentA volcano in western Japan erupted on Sunday evening, sending a large plume of black smoke into the sky and spewing...
© 2021 Flag Media Group. All Rights Reserved. ** TELL YOUR STORY **
We do not generate news. This digital publication and all Flag Media publications curate Google news using Google RSS Feeds.
Please advise if any posts need to be removed for licensing/copyright issues.