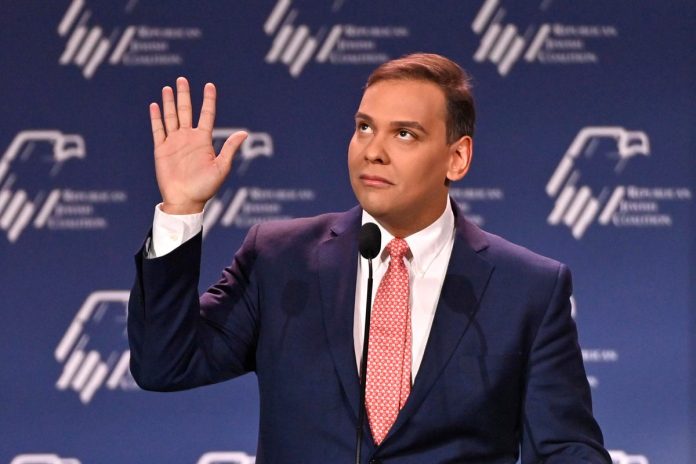 Rep. George Santos has made quite a splash on the internet, inspiring an avalanche of memes after being caught in an increasingly absurd web of lies; the Republican member of Congress allegedly lied about his resume, his heritage, his reported history as a drag queen, and appearing on the Disney channel show Hannah Montana with Miley Cyrus.

On Friday, Politico reported on an old Wikipedia user biography written by a user named “Anthony Devolder,” an alias previously used by Santos, and lists his birth date, which matches that of Santos.

The Wikipedia is riddled with misspellings and makes a series of fanciful claims, boasting an appearance on “Hanna” Montana and The Suite Life of Zack & Cody. He also claimed to have been “discovered” by a Hollywood producer “known for producing INDEPENDENTS DAY BY STEVEN SPILBERG” (Independence Day was, in fact, directed by Roland Emmerich).

It also claims that his “first” role was in a 2009 movie titled The Invasion, “startting Uma Turman,Chris Odanald ,Melllisa George and Alicia Silver Stone” (a sci-fi film called The Invasion was released in 2007, and stars Nicole Kidman and Daniel Craig).

The “Hanna Montana” lie is the latest revelation from a hilariously deceitful politician who puts former President Donald Trump to shame; Santos, it seems, doesn’t even care to spell his lies correctly, or bother sticking to coherent, plausible narratives.

Twitter users have compared Santos to the con-artist protagonist from Catch Me If You Can (which was directed by Steven Spielberg), and framed him as the ultimate antidote to imposter syndrome.

The internet has also gleefully embraced Santos’ alleged history of dressing up in drag, under the name “Kitara Revache,” a claim backed up by multiple photos, videos and interviews with former friends. Santos has denied the claims (after all, Republicans aren’t exactly known for their tolerance towards drag queens).

Twitter has also been having fun with a bizarre Santos quote; in response to criticism for claiming he was Jewish without having Jewish ancestry, Santos responded that he was “Jew-ish,” which sparked comparisons to Seinfeld.

Santos’ former roommate recently spoke out, claiming that Santos only wants to be in Congress so that he can acquire a generous pension and free healthcare for the rest of his life, which lead to Santos being jokingly heralded as “relatable.”

George Santos serves as an inspiration to anyone too intimated to embellish their resume; who needs actors and comedians when we have politicians?

News - May 4, 2022 0
Shares in Just Eat Takeaway.com fell 7 per cent on Wednesday after the company revealed it was investigating a complaint against one of its...

News - June 12, 2022 0
This post was originally published on Tker.co.They often say that the cure for high prices is high prices.The idea is that when the price...

News - January 7, 2022 0
What do you expect to get when a joke-narrating robot and a robotics engineer go into a bar? Live comedy is what you get....

News - August 28, 2022 0
ISLAMABAD (AP) — Deaths from widespread flooding in Pakistan topped 1,000 since mid-June, officials said Sunday, as the country’s climate minister called the deadly...
© 2022 Venture Current is a Flag Media LLC Publication. All Rights Reserved.
VC is part of the FLAG Token rewards network. Clients and partners can use FLAG Tokens for VC products and services.
VC runs 'Automatic' software. Stories posted here come from generic-topic Google news RSS feeds as well as client and partner-approved content.
If a story appears on this page that needs to be deleted due to licensing issues, please message us immediately so we can help you.