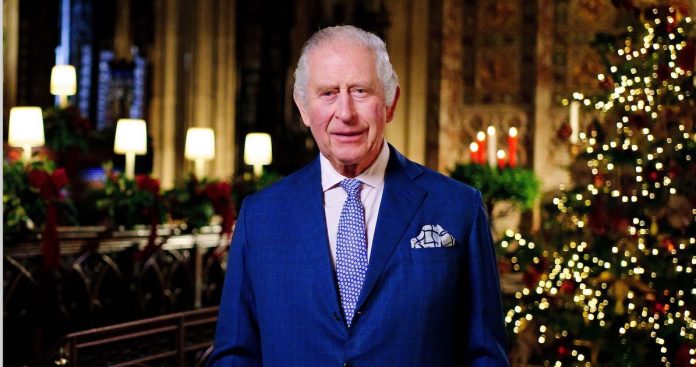 King Charles is set to address the public for his first Christmas broadcast. An image of Charles, taken during the recording of his inaugural festive address, has been released ahead of the broadcast being screened on Christmas Day.

The king is expected to pay tribute to the late Queen Elizabeth during his first Christmas message to the nation. Ahead of it airing, the palace has released a sneak peek photo.

But there’s one key difference you may spot in the snap: the monarch is pictured standing while delivering his address. In recent years the queen recorded her Christmas broadcast sat at a desk, but she had also stood in decades past.

The festive message was recorded on December 13 at St George’s Chapel, Windsor Castle, a religious building which has a strong association with the late queen.

The monarch’s committal service was held at the place of worship and she was laid to rest in the George VI Memorial Chapel, within St George’s, with her husband the Duke of Edinburgh.

Charles spoke movingly about his “beloved mother,” who reigned for 70 years, in his first broadcast as King screened the day after her death on September 8.

In that address he said: “We owe her the most heartfelt debt any family can owe to their mother; for her love, affection, guidance, understanding and example.”

In the background, you can spot a large Christmas tree decorated with ornaments, which are apparently made from sustainable materials, including paper and glass as well as natural products like pine cones.

As the Prince of Wales, the King regularly voiced concerns about the threat to the environment and worked to bring governments, and the private and public sector, together to find solutions to the climate change crisis.

The picture also shows foliage decorations that have been placed among the stalls in the quire, that feature holly, berried ivy and red skimmia.

Following the recording of the king’s festive address, the Christmas tree was re-used by St George’s Chapel in the Dean’s Cloister for visitors to enjoy.

The broadcast was produced by BBC Studios Events, ahead of ITV whose turn it was to record the King’s first festive address under a rotating producer system between the BBC, ITV and Sky News.

A Buckingham Palace spokesman said the decision was taken as the BBC had “experience of shooting in St George’s Chapel this year.”

News - August 10, 2021 0
AMC Entertainment CEO Adam Aron held an online conference on Monday with some company-related announcements. In addition to revealing a new deal with Warner...

New data shows how far VCs are pulling back on US Series A, B,...

News - March 16, 2022 0
The venture capital market is retreating somewhat from its aggressive 2021 pace, new data indicates. According to data collected by Carta, a unicorn startup that...

Traders raise bets on US inflation as commodity prices surge

News - March 9, 2022 0
Traders in US financial markets have cranked up their bets on how high inflation will soar in the coming years, complicating the Federal Reserve’s...

News - October 1, 2021 0
Receive free Sony Corp updatesWe’ll send you a myFT Daily Digest email rounding up the latest Sony Corp news every morning. Sony and Zee Entertainment...
© 2022 Venture Current is a Flag Media LLC Publication. All Rights Reserved.
VC is part of the FLAG Token rewards network. Clients and partners can use FLAG Tokens for VC products and services.
VC runs 'Automatic' software. Stories posted here come from generic-topic Google news RSS feeds as well as client and partner-approved content.
If a story appears on this page that needs to be deleted due to licensing issues, please message us immediately so we can help you.