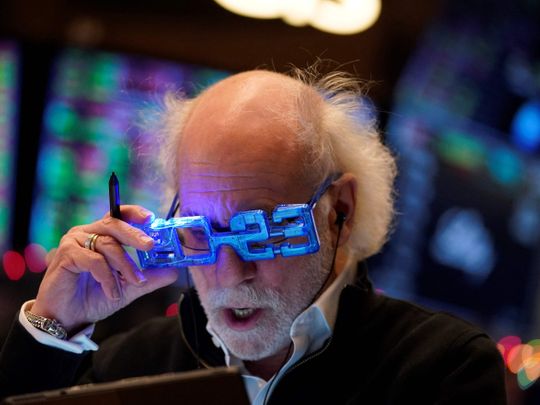 New York: It’s been a year of historic selloffs for US equities.

Marked by surging inflation, jumbo-sized interest rate hikes, a darkening outlook on corporate earnings and recession clouds, the S&P 500 Index has lost 21 per cent, on pace for its biggest slump since 2008. From crypto to former pandemic winners and so-called FAANG stocks, investors have been shaken out of their profit euphoria, sometimes in the blink of an eye.

For those who trod in the wrong places, the outcome has been painful. About half of a $9.1 trillion rout in the S&P 500 Index was the doing of just six megacaps: Amazon.com Inc., Apple, Alphabet, Microsoft, Tesla and Meta Platforms, each of which erased between $632 billion and $908 billion of market value.

Here’s a closer look at some of the most stunning stock wipeouts of 2022:

The FAANGs “- Facebook, Amazon, Apple, Netflix Inc. and Google “- had it bad this year as surging bond yields prompted investors to flee stocks with the highest valuations.

Yet it was the former, renamed Meta, that suffered most, falling 66 per cent to date. The Facebook owner had the worst day in its stock market history on February 3 when it lost an estimated $251 billion in market value after posting disappointing earnings.

To that can be added regulatory and legal risks, cutbacks from advertisers and a crackdown on targeted ads by Apple. Plus, CEO Mark Zuckerberg’s bet on virtual reality through the metaverse has cost the company billions and isn’t expected to turn a profit anytime soon.

It’s been a disastrous year for stocks with exposure to cryptocurrencies as digital tokens were pummeled by a series of blowups, including the collapse of a so-called stablecoin in May and the unravelling of the FTX crypto exchange in November.

And as the largest public US crypto exchange platform, Coinbase has been among the hardest hit as investors yank coins off exchanges or exit the asset class as a whole. This year’s 87 per cent plunge in the stock has wiped out about $47 billion in market value.

Owning Coinbase shares is “making a bet on the whole crypto token ecosystem,” according to Dan Dolev, an analyst at Mizuho Securities who has an underperform rating on the stock. “You’re better off just owning Bitcoin, if you believe in Bitcoin,” he said.

Not all analysts are so gloomy, with the average price target implying that the stock will more than double in the next 12 months.

It’s been a difficult year for many stocks that not long ago were considered pandemic winners. Prime among them is the online car seller Carvana.

Having lost about 98 per cent of its value in 2022, the company is one of the 10 worst performers in the Russell 3000. The difference with the other nine is that it was by far the biggest at the start of the year when its market value stood at about $39 billion.

Carvana had surged during the pandemic as consumers flocked to the digital platform to buy used cars. But declining prices, soaring inflation and the rising cost of debt cast doubt on the business model. The company struggled to restructure debt, and its bonds signal the market sees a potentially high chance of default.

“While the company has been aggressively cutting fixed expense, we also see execution risks as elevated,” Truist Securities analyst Naved Khan wrote in a December note, downgrading the stock to hold from buy.

Another lockdown winner turned loser is Peloton. Having lost a large part of its searing 2020 gains last year, the stock has slumped a further 78 per cent in 2022, and now trades a long way below even its 2019 initial public offering price.

Peloton’s story has moved beyond a reversal in once booming demand for its exercise bikes and fitness classes, with the company scrambling to cut jobs and offload operations following calls by activist investor Blackwells Capital LLC for the departure of CEO and co-founder John Foley. Foley stepped down as part of a leadership shakeup.

“I think we’ll get an answer on whether Peloton survives in the next year,” said Oppenheimer & Co. analyst Brian Nagel, who has an outperform rating on the stock. “Time is not on their side necessarily.”

Analysts mostly look for the shares to rally in 2023, with the average price target implying 59 per cent upside over the next 12 months.

Peloton’s struggles have had a knock-on effect on Affirm, the buy-now-pay-later lender whose revenue was boosted during the pandemic by a partnership between the firms.

Affirm last month reduced its forecast for gross merchandise value associated with the fitness company as it posted a loss and cut revenue targets. That prompted a further slide in its stock, which has tumbled more than 90 per cent this year.

After exploding during the pandemic, buy-now-pay-later firms face mounting challenges as rising rates and soaring inflation begin to squeeze household incomes. They’re also facing a high cost of capital and scrutiny over fees. Among payment peers, PayPal Holdings Inc. has fallen 64 per cent this year, while Block Inc. is down 63 per cent.

Target saw its worst single-day drop since the 1987 Black Monday crash after slashing profit forecasts in May, sinking 25 per cent and giving back much of its pandemic gains.

The stock has failed to recover since, and with a year-to-date slide of 37 per cent is now on course for the biggest annual decline since Bloomberg records began in 1980.

Like most retailers, Target has felt the pain of bloated inventories and higher costs for merchandise, transportation and labor at a time when consumers are cutting back on spending. The company warned in November of a potential drop in comparable sales during the current quarter, the first decline in five years. It also predicted operating profit will shrink to about 3 per cent of revenue “- roughly half the previous forecast.

According to Citigroup Inc. analyst Paul Lejuez, the near-term “is likely to remain volatile” for Target. Still, he has a buy rating on the stock, as do many others. Indeed, none of the more than 35 analysts the cover the retailer have a sell recommendation, according to data compiled by Bloomberg.

News - October 24, 2022 0
RIO DE JANEIRO, Oct 24 (Reuters) - A violent showdown between an ally of President Jair Bolsonaro and police over the weekend is stirring...

A brutal bond market sell-off wreaks havoc on one of fixed income's most popular...

News - April 19, 2022 0
Things are getting pretty bad for 30-year Treasury bonds, the prices for which are plumbing depths not seen since the early days of the...

Another Xbox Game Pass Game Leaks Ahead of Announcement

News - May 14, 2022 0
A gunman wearing military gear and livestreaming with a helmet camera opened fire with a rifle at a Buffalo, New York, supermarket in what...
© 2022 Venture Current is a Flag Media LLC Publication. All Rights Reserved.
VC is part of the FLAG Token rewards network. Clients and partners can use FLAG Tokens for VC products and services.
VC runs 'Automatic' software. Stories posted here come from generic-topic Google news RSS feeds as well as client and partner-approved content.
If a story appears on this page that needs to be deleted due to licensing issues, please message us immediately so we can help you.