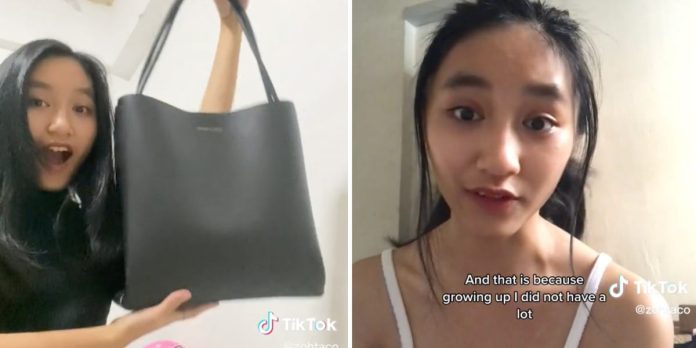 A Singapore-based TikToker made a tearful video response to online hate after she was mocked for referring to a $60 bag as “luxury.”

On January 8, 17-year-old Zoe Gabriel posted a video with an on-screen caption that read, “my first luxury bag.” In the clip, Gabriel could be seen purchasing a bag from Charles & Keith, a Singaporean fashion brand.

The video then cut to a clip of Gabriel unboxing her purchase and putting it over her shoulder. “Thank you dad,” an additional caption under the post read.

Gabriel’s post blew up, receiving 6.7 million views, but it received a mixed response.

While some people wrote positive remarks complimenting her and saying they liked her new bag, others appeared to mock her for using the term “luxury” to describe the item, which retails at $76 on the fashion house’s US website, and 79.90 Singapore dollars, or approximately $60, on its Singapore website.

Some commenters compared her description to “calling a fast food restaurant fine dining,” and highlighted fashion brands that have a similar price point but typically wouldn’t be described as “luxury.”

Later that same day, Gabriel replied to one comment that said, “Who’s gonna tell her?” followed by a laughing emoji. She filmed a response, explaining why she stood by her use of the term “luxury.”

“Growing up, I did not have a lot. My family didn’t have a lot. We couldn’t buy things as simple as bread,” she said.

She continued, appearing to tear up in the clip: “Your comment spoke volumes on how ignorant you seem because of your wealth. To you, an $80 bag may not be a luxury. For me and my family it is a lot, and I’m so grateful that my dad was able to get me one. He worked so hard for that money. I can’t believe I got hate over a bag, that I was so excited to have.”

She was met with an overwhelmingly positive response, receiving 2.1 million views and 171,000 likes, and commenters began writing positive comments under this video, as well as under her original post.

“The haters making fun of you are simply too privileged to see things from another perspective and be happy for someone else. Don’t let that get you down,” wrote one commenter.

“Beautiful bag. having a dad who loves you is a luxury in itself,” said another commenter.

“Thank you for all those who have shown me love and support,” Gabriel said in a follow-up post from January 9, adding, “Remember to be kind and have compassion and have the best day ever.”

Gabriel did not immediately respond to Insider’s request for comment, but in an email to the Singapore broadsheet newspaper The Straits Times, the TikToker said she thought the negative response she initially received “highlights the blind spot of people who grew up with privilege and take it for granted. They can’t imagine what it is like for peers to grow up in a low-to-middle income background, much less poor.”

Representatives for Charles & Keith did not immediately respond to Insider’s request for comment, but told The Straits Times that after seeing Gabriel’s video, they invited her and her father to have lunch with the company’s founders, who also came from “humble beginnings.”

“Our founders believe that our products should spark joy, empower fashion lovers and give them confidence, something we believe she presented so eloquently in her video and for which we are so grateful,” a company spokesperson told the outlet.

Zoe Gabriel has over 44,000 TikTok followers and she typically posts lifestyle content sharing information about herself with her followers, such as facts about her Filipino heritage and her family.

On TikTok, influencers have previously come under fire for talking about making large and expensive purchases, facing accusations about being privileged or out of touch.

In October, Insider reported that an influencer received backlash for saying she “accidentally” bought a couch for $100,000, later appearing to suggest the whole thing was a prank. In November, another influencer said she spent $10,000 on Harry Styles so she could be close to the stage, attracting criticism from commenters who said that level of spending would be beyond the means of many ordinary people.

For more stories like this, check out coverage from Insider’s Digital Culture team here.

News - January 11, 2023 0
Scientists found that 33 genes within the lizard genome were repeatedly associated with urbanization.New Delhi,UPDATED: Jan 11, 2023 13:45 ISTIt’s important to understand how...

News - May 27, 2022 0
Manish Maheshwari, the former head of Twitter India, is leaving the startup he co-founded just six months ago following disagreements with co-founder and investors. “I...

Cost-conscious consumers are the problem for Netflix

News - May 14, 2022 0
When Netflix last month revealed that it had lost customers for the first time in a decade, you might have expected competing streaming services...

News - April 16, 2022 0
British households face paying tens of millions of pounds in administration costs for the government’s controversial scheme to reduce energy bills by £200 in...

News - March 9, 2022 0
LONDON (Reuters) - British Prime Minister Boris Johnson said on Wednesday there were few things more depraved than the targeting of vulnerable and defenceless...
© 2022 Venture Current is a Flag Media LLC Publication. All Rights Reserved.
VC is part of the FLAG Token rewards network. Clients and partners can use FLAG Tokens for VC products and services.
VC runs 'Automatic' software. Stories posted here come from generic-topic Google news RSS feeds as well as client and partner-approved content.
If a story appears on this page that needs to be deleted due to licensing issues, please message us immediately so we can help you.