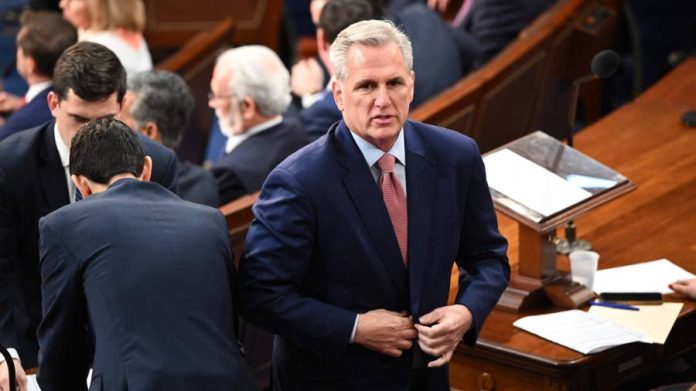 Donald Trump has thrown his weight behind Kevin McCarthy’s bid to become the next Speaker of the House, in an effort to quell opposition to the California congressman and end the impasse that has brought renewed chaos to Washington and exposed fresh fissures in the Republican party.

In a post to his Truth Social platform on Wednesday morning, the former president said: “It’s now time for all our GREAT Republican House members to VOTE FOR KEVIN, CLOSE THE DEAL, TAKE THE VICTORY.”

The endorsement came shortly after Trump demurred when asked directly whether he supported McCarthy’s efforts to become Speaker. The former president told NBC News on Tuesday night: “I got everybody calling me wanting my support. But let’s see what happens.”

Trump’s intervention came hours before the House of Representatives was due to resume voting on the next Speaker of the House, after McCarthy made history on Tuesday when he became the first majority party leader to lose on the first ballot in a century.

McCarthy also failed to clinch the simple majority required on second and third ballots on Tuesday, before the House adjourned and his allies scrambled to win over the 20 lawmakers who have opposed his efforts to take the Speaker’s gavel.

Joe Biden, the Democratic US president, on Wednesday called the House proceedings “a little embarrassing”, adding: “How do you think this looks to the rest of the world?”

But it remained unclear on Wednesday whether Trump’s latest endorsement would help McCarthy shore up the support he needed. Opponents of the California Republican have come from various factions of the party, and include Trump loyalists such as Florida’s Matt Gaetz and Colorado’s Lauren Boebert, as well as ultraconservatives such as Chip Roy of Texas and Scott Perry of Pennsylvania, who are pushing for rule changes that would make it easier to call a vote of no confidence in a future Speaker.

Tuesday’s failed votes ushered in a historic moment of gridlock in Washington, as the House is constitutionally required to elect a Speaker and cannot start governing until one is selected.

The stalemate has also underscored long-simmering tensions in the Republican party, which remains fractured after a disappointing performance in last November’s midterm elections. Despite expectations of a “red wave”, Republicans eked out a razor-thin majority in the House of Representatives, the lower chamber of Congress, and failed to take back control of the Senate, the upper chamber.

Many Republicans in Washington have blamed those failures on Trump, who played a key role in the primary process by pushing his preferred candidates — many of whom later failed at the ballot box. Trump nevertheless has sought to reassert himself as kingmaker in the party, especially with an eye towards the 2024 presidential contest. The former president launched his third presidential bid just days after the midterms, and so far no other candidate has entered the ring to challenge him.

“Kevin McCarthy will do a good job, and maybe even a GREAT JOB — JUST WATCH!” Trump posted on Wednesday morning.

Trump’s support for McCarthy marks the latest chapter in a rollercoaster relationship between the two men. For years, Trump frequently referred to the congressman as “my Kevin”. But McCarthy reportedly said “I’ve had it with this guy” after the January 6 2021 attack on the US Capitol, before smiling in photos with Trump at his Mar-a-Lago resort just weeks later.

Those who do their homework end up investing in bitcoin: Scaramucci

News - October 25, 2021 0
Hedge fund investor Anthony Scaramucci argues anyone who studies bitcoin carefully and understands the cryptocurrency will be convinced of its potential."Do the homework on...

Google may debut its own smartwatch in 2022

News - December 2, 2021 0
Rumors of a Google-branded smartwatch have persisted for years, but they might be close to coming true. Insider sources claim Google is planning to...

News - February 1, 2023 0
Greybull Capital, the private equity group associated with the 2019 collapse of British Steel, has emerged as a potential late bidder for Britishvolt. Executives...

everything we know about Destiny 2’s upcoming expansion

News - August 25, 2021 0
Bungie have announced their upcoming Destiny 2 expansion, The Witch Queen, revealing a new game mode, a first-person melee weapon, and much more. During Bungie’s massive...
© 2022 Venture Current is a Flag Media LLC Publication. All Rights Reserved.
VC is part of the FLAG Token rewards network. Clients and partners can use FLAG Tokens for VC products and services.
VC runs 'Automatic' software. Stories posted here come from generic-topic Google news RSS feeds as well as client and partner-approved content.
If a story appears on this page that needs to be deleted due to licensing issues, please message us immediately so we can help you.