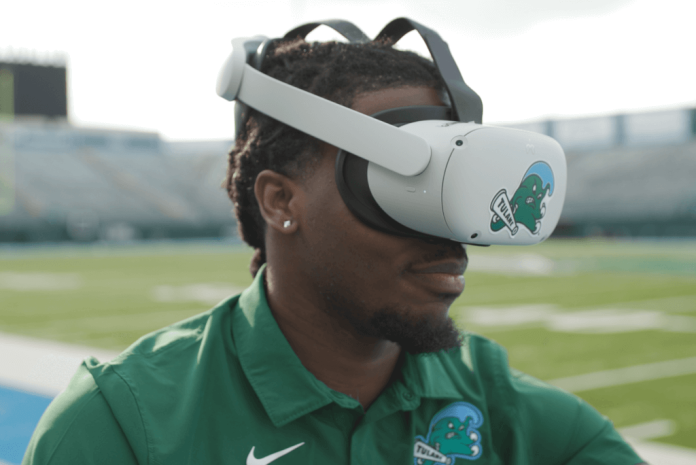 Multiple times in a given week this season, Tulane wide receiver Phat Watts walked into the team training area to rehab a torn ACL he suffered in the second game in September. Various movements and stretches are part of the typical recovery process.

But when Watts gets on the stationary bike, he doesn’t put on headphones to listen to music, as many players like to do. Instead, he puts on an Oculus virtual reality headset and could simulate swimming in the ocean for 15 minutes.

For the past few years, Tulane has experimented with using virtual reality with its football team. Watts had periodically used it in the past for relaxation, but the injury and rehab made him better realize its value.

At a time when more universities and sports teams want to help their athletes with mental health, Tulane is one of the first teams to use VR for that purpose. It has played a helpful role in one of the best periods of success in Tulane’s football history, including a 2022 turnaround to an AAC championship and a Cotton Bowl appearance against USC on Monday.

The VR headset can be used before or after meetings or games, at halftime or whenever a player wants a session, which typically lasts around 10-15 minutes. Players can put themselves in another landscape, like a cold forest, a beach, outer space or somewhere else. Handsets can allow them to interact with the environment. They can also choose meditation mode, which shows patterns across the screen. Other Tulane sports teams use the VR system as well. It’s all meant to relax players from the stress that comes with being a college athlete.

Patrick Bordnick, the dean of Tulane’s school of social work, leads the VR program and is even on the sideline for football games.

“They don’t want me teaching football skills,” Bordnick said, “but the players say seeing me on the sideline is calming because I’m associated with the work they’re doing. There’s no judgment from me on whether they’re performing or not.”

VR in football is not new. Strivr is a VR program developed by a former Stanford football graduate assistant almost a decade ago that virtually puts players on the field to go through reps in practice. It’s a system used by numerous college and pro sports teams. But that’s for work on the field. What Tulane does here is about mental well-being.

Bordnick stumbled into VR by accident. His background is studying cravings, specifically substance abuse. He has published more than 50 peer-reviewed articles in various journals. Around 20 years ago, while living in Atlanta, he discovered a VR company that worked with phobias like the fear of heights. He asked if it could be configured to teach people skills to avoid using drugs. If he could virtually put people in a scenario where they’re tempted with drugs, he could better study behavior, rather than putting someone in a cold lab room environment. From 2007 to 2016, Bordnick founded and led the Virtual Reality Clinical Research Lab at the University of Houston.

He joined Tulane in 2016 and began working with the football team in 2017 to try some new ideas in sports. The program was refined late last year, and the school has launched a study within the athletic department across all sports, including sports like sailing.

“We started doing it with our guys we’d IV at halftime that were cramping,” said Greg Stewart, the football team physician and co-director of Tulane’s sports medicine program. “You’re just trying to calm them down some and calm the nervous system down. What we know is that adrenaline and all of that raise neuromuscular excitation, so it’s easier for them to cramp. This was a way to calm the nervous system down while we’re rehydrating.”

Tulane is a private school with an endowment of nearly $2 billion, and it’s considered one of the best academic schools in the South. Stewart chaired the AAC’s COVID-19 advisory group in 2020, and Tulane processed 100,000 COVID-19 tests on campus, instead of needing to send them out.

“At a school like ours, when you talk about institutional alignment, part of it is taking advantage of the assets and resources you have available to you on campus,” athletic director Troy Dannen said. “(Bordnick’s) got this specialized interest and knowledge, and it came together pretty easily. He’s on every sideline, at a lot of practices. A number of kids I know absolutely swear by what he’s doing.”

The system is especially popular with the specialists on the football team, with whom the mental part of the game is vital. Punter Casey Glover likes to use it a few days before games. He doesn’t have a preference for the VR landscape. It could be a rainforest, outer space or a snowy environment where animals walk around. He also likes the meditation app.

Heading to a rainforest would seem to have little to do with football, but the system is not about football. It’s about everything else that can trouble a player.

As mental health has become a point of emphasis for many sports teams, coaches, administrators and athletic trainers have talked about it more and more. But what exactly does that mean? It’s not simply hiring more therapists or psychologists. Bordnick wants more teams to add their own VR work themselves.

He’s seen its impact up close. Bordnick has a daughter who plays college soccer and two others who run cross country. He’s seen how the increased stress of youth and college athletics can impact young people in their sport and outside their sport. That’s what it means to take on the challenge of mental health, and VR can be one of many tools to help.

“I would love other teams and universities to hear this and take care of the mental wellness of their athletes as well,” Bordnick said. “It’s the right thing to do.

“I saw what my daughters went through, and helping them to be able to love their sport again, virtual reality helped that. It became their sport again instead of something they needed to be frightened of because they were afraid to make a mistake.”

News - May 25, 2022 0
1. Beginning in fiscal 2022, the Company revised its method for determining its comparable store sales calculations to include relocated store locations. Prior...

YouTube bags NFL Sunday Ticket streaming rights for 2023 and beyond

News - April 2, 2022 0
Edtech startup TutAR, owned and operated by Infusory Future Tech Labs Pvt Ltd, has raised an undisclosed amount in its seed round from April...

News - August 25, 2022 0
NEWYou can now listen to Fox News articles! The chief of Israel's top intelligence agency has reportedly warned that the United States is...
© 2022 Venture Current is a Flag Media LLC Publication. All Rights Reserved.
VC is part of the FLAG Token rewards network. Clients and partners can use FLAG Tokens for VC products and services.
VC runs 'Automatic' software. Stories posted here come from generic-topic Google news RSS feeds as well as client and partner-approved content.
If a story appears on this page that needs to be deleted due to licensing issues, please message us immediately so we can help you.