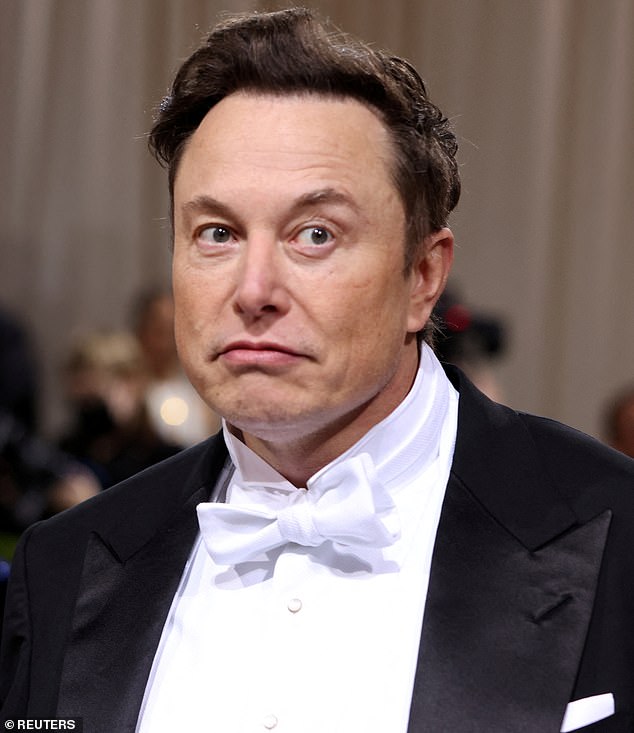 Elon Musk’s Twitter is being sued by the tech giant’s landlord in San Francisco for non-payment of rent.

Musk owes $136,250 in back rent for the offices, according to Bloomberg. Earlier this week, it was reported that Twitter is being evicted from other offices across the world for the same reasons.

The company’s landlord Columbia Reit filed a complaint in court in San Francisco on Thursday alleging that it told Twitter on the 16th of December that they would have to vacate the offices within five days, they did not comply, reports Bloomberg.

At the time of writing, there has been no public statement from Twitter on the spate of missed rent payments. The company is also being sued for non-payment of charter flights.

Musk owes $136,250 in back rent for the offices, according to Bloomberg

The offices are located on the 30th floor of the Hartford Building at 650 California Street in the city’s financial district. The building’s other tenants include Omnicom Group, Affirm and Credit Suisse.

The building is not the company’s headquarters, which are located along Market Street, less than two miles away from the California Street location.

Earlier this week, it was reported that Musk was no longer paying rent on Twitter’s Seattle office and was also plotting to shutter one of the firm’s New York offices.

The San Francisco headquarters has been condensed from four floors to two, with luxurious perks now reportedly scrapped in favor of stinky offices that are no longer cleaned.

And one of the travel expenses Musk has refused to pay included a $197,725 tab for private flights which were taken the very week he took over the company.

Numerous other travel vendors have also gone unpaid, according to the Times.

The payment over that private charter bill has gone to court in New Hampshire.

In another drastic change, the billionaire sent staff to a Sacramento data storage facility to shut down servers on Christmas Eve. The center was one of three critical server facilities that had kept the social network running smoothly.

Some expressed concern that losing the servers could cause problems but were told the priority was to save money, according to the New York Times.

Some workers were hauled into work during the festive period because systems went down and internal data was potentially lost.

Twitter has stopped paying millions of dollars in rent and services in the past few months – with Musk ordering his staff to renegotiate the agreements or end them completely. 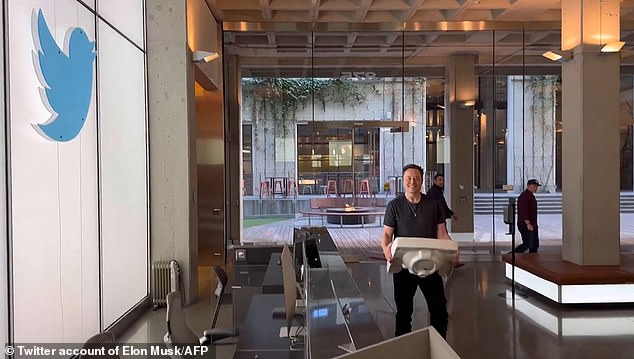 Billionaire Tesla chief Elon Musk on October 26, 2022 shows himself carrying a sink as he enters the Twitter headquarters in San Francisco 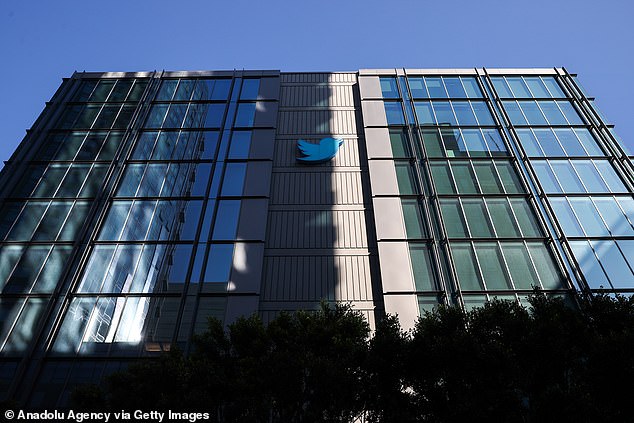 Pictured, Twitter’s California HQ. The landlord that is suing Twitter is not for the company’s headquarters, which are located along Market Street, less than two miles away from the California Street location

The company is facing eviction from its Seattle office after failing to pay rent on the building, with security personnel also being cut in Musk’s money-saving spree.

In San Francisco, he has consolidated workers onto two floors and closed four, sacking janitors after workers went on strike for better wages.

It has left the office reeking of leftover takeout and body odor according to current and former employees.

Bathrooms have been left dirty, and Musk is now turning his efforts to weed out the sources of leaks to the press regarding the company.

He is focusing on eliminating people inside the company that he believes are opposed to him – as well as being described as having an ‘erratic’ management style.

Staff claim that he often interrupts meetings at random and talks for long stretches, demanding top leaders be sounding boards for his ideas.

Many employees are expecting more layoffs as US revenue numbers continue to flag – despite Musk hiring several new employees to replace those terminated during the mass layoffs.

The SpaceX boss said on a live Twitter forum last week that the company is a ‘plane that is headed towards the ground at high speed with the engines on fire and the controls don’t work.’

He claims that Twitter is on track to have a ‘negative cash flow situation’ of about $3billion in 2023 – attributing it to his ‘crazy’ cost-cutting.

Musk said he will appoint a new CEO of Twitter, after putting it to a vote on the social media platform.

Since early November he sought to save around $500 million in non-labor costs and has laid off nearly 75 per cent of the company’s workforce since taking over.

Musk’s acquisition of Twitter has also been partly-blamed for the 70 percent drop in the share price of his electric car firm Tesla.

Key investors there are said to be upset he is not giving the pioneering firm his undivided attention.

Slurs and ivermectin are both having a big weekend on Twitter, for some reason

News - October 29, 2022 0
Earlier this week—and after months of trying to tantrum his way out of it—Elon Musk became the new owner of Twitter, promising the sort...

News - January 22, 2022 0
Just over two weeks before the start of China’s first-ever Winter Olympics, authorities in Beijing issued a warning designed to maintain the country’s strict...

News - October 8, 2021 0
A top investor at the world’s biggest hedge fund has warned that high inflation is here to stay and central banks may be powerless...

News - November 3, 2021 0
An exterior view shows a Bed Bath & Beyond store in Novi, Michigan, U.S., January 29, 2021. REUTERS/Emily ElconinNov 3 (Reuters) - Shares of...
© 2022 Venture Current is a Flag Media LLC Publication. All Rights Reserved.
VC is part of the FLAG Token rewards network. Clients and partners can use FLAG Tokens for VC products and services.
VC runs 'Automatic' software. Stories posted here come from generic-topic Google news RSS feeds as well as client and partner-approved content.
If a story appears on this page that needs to be deleted due to licensing issues, please message us immediately so we can help you.