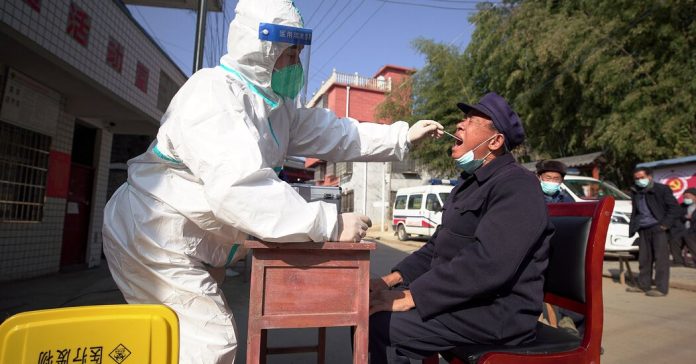 The Biden administration announced on Wednesday that travelers from China, Hong Kong and Macau must present negative Covid-19 tests before entering the United States, a move that it says is intended to slow the spread of the coronavirus. The requirement will take effect on Jan. 5.

The announcement, by the Centers for Disease Control and Prevention, came amid growing concern over a surge of cases in China and the country’s lack of transparency about the outbreak there.

C.D.C. officials said the requirement for testing will apply to air passengers regardless of their nationality and vaccination status. It will also apply to travelers from China who enter the United States through a third country, and to those who connect through the United States to other destinations.

China’s Covid outbreak has been worsening in recent days, with local governments reporting hundreds of thousands of infections a day. Videos obtained by The New York Times show sick patients crowding hospital hallways. But the situation is difficult to track in real time because China does not release reliable Covid data.

After three years of insisting on a “zero Covid” policy, China made an abrupt turnabout in early December and lifted that policy, after mass protests over lockdowns that threatened the ruling Communist Party. Since then, there has been an explosion of cases in Beijing.

Scientists in Hong Kong have reported that an Omicron subvariant known as BF.7 has been responsible for the Beijing outbreak. That variant is a sublineage of BA.5, which has until recently been dominant in the United States. But BF.7, while present in the United States for months, has not shown signs of outcompeting other versions of Omicron here.

The C.D.C. estimated that BF.7 made up 4 percent of cases in late December, and that it had become less common since November. Other Omicron subvariants that scientists believe may be more adept at evading existing immune responses are currently dominant in the United States.

Scientists said in recent days that, for now at least, the variant that fuels China’s outbreak may not necessarily be the one that most effectively sidesteps immune responses. Because so few people in China have previously been infected with versions of Omicron, any of the highly contagious Omicron subvariants that have been circling the world lately could take off there.

In a population like China’s with so little existing immunity from infections, the dominant variant may not necessarily be the one that is best at getting around those immune responses, but simply the one that happens to catch fire, they said.

“In some sense, whatever took off first is probably going to be dominant there,” said James Trauer, an expert on modeling infectious diseases at Monash University in Melbourne, Australia.

This is a developing story. Check back for updates.

News - December 3, 2021 0
Sindy Leon founded a jewelry business called, Ariss Jewerly, and works with jewelers in her native Colombia to create unique items made of silver...

Inflation will run above our 2.0% goal well into next year

News - January 28, 2022 0
A new Pokémon game means, well, new Pokémon, and Pokémon Legends: Arceus is no exception. And while the latest installment in Nintendo’s flagship role-playing...

Rwanda confirms it has agreed to host UK asylum seekers

News - April 14, 2022 0
The government of Rwanda on Thursday confirmed that it had signed a “bold new partnership” with the UK under which some people seeking refugee...
© 2022 Venture Current is a Flag Media LLC Publication. All Rights Reserved.
VC is part of the FLAG Token rewards network. Clients and partners can use FLAG Tokens for VC products and services.
VC runs 'Automatic' software. Stories posted here come from generic-topic Google news RSS feeds as well as client and partner-approved content.
If a story appears on this page that needs to be deleted due to licensing issues, please message us immediately so we can help you.