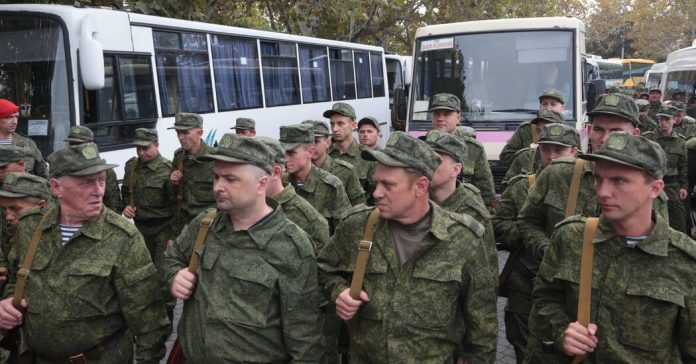 WASHINGTON — For years, the United States has insisted that Crimea is still part of Ukraine. Yet the Biden administration has held to a hard line since Russia’s invasion of Ukraine, refusing to provide Kyiv with the weapons it needs to target the Crimean Peninsula, which Russia has been using as a base for launching devastating strikes.

Now that line is starting to soften.

After months of discussions with Ukrainian officials, the Biden administration is finally starting to concede that Kyiv may need the power to strike the Russian sanctuary, even if such a move increases the risk of escalation, according to several U.S. officials who spoke on condition of anonymity to discuss the sensitive debate. Crimea, between the Black Sea and the Sea of Azov, is home to tens of thousands of dug-in Russian troops and numerous Russian military bases.

The moderation in position has come about as the Biden administration has come to believe that if the Ukrainian military can show Russia that its control of Crimea can be threatened, that would strengthen Kyiv’s position in any future negotiations. In addition, fears that the Kremlin would retaliate using a tactical nuclear weapon have dimmed, U.S. officials and experts said — though they cautioned that the risk remained.

The new thinking on Crimea — annexed illegally by Russia in 2014 — shows how far Biden administration officials have come from the start of the war, when they were wary of even acknowledging publicly that the United States was providing Stinger anti-aircraft missiles for Ukrainian troops.

But over the course of the conflict, the United States and its NATO allies have been steadily loosening the handcuffs they put on themselves, moving from providing Javelins and Stingers to advanced missile systems, Patriot air defense systems, armored fighting vehicles and even some Western tanks to give Ukraine the capacity to strike against Russia’s onslaught.

Now, the Biden administration is considering what would be one of its boldest moves yet, helping Ukraine to attack the peninsula that President Vladimir V. Putin views as an integral part of his quest to restore past Russian glory.

American officials are discussing with their Ukrainian counterparts the use of American-supplied weapons, from HIMARS rocket systems to Bradley fighting vehicles, to possibly target Mr. Putin’s hard-fought control over a land bridge that functions as a critical supply route connecting Crimea to Russia via the Russian-occupied cities of Melitopol and Mariupol.

However, President Biden is not yet ready to give Ukraine the long-range missile systems that Kyiv would need to attack Russian installations on the peninsula.

In deciding to give the Bradleys to Ukraine, the Biden administration moved closer to providing Kyiv with something for which senior Ukrainian officials have been imploring the United States for months: direct American help for Ukraine to go on the offense — including targeting Crimea.

The Bradleys are armored personnel carriers mounted with powerful 25-millimeter guns and guided missiles that can take on Russian tanks.

Frederick B. Hodges, a retired lieutenant general and former top U.S. Army commander in Europe, said that in the coming months the Bradleys could be used by Ukrainian troops to help sever the land bridge.

Being able to rely on military bases in Crimea for staging was the primary reason Russian forces were able to seize land in southern Ukraine last year, a U.S. official said. Making those forces less capable is a key battlefield goal of the Ukrainians.

“Ukraine could use Bradleys to move forces down major roads, such as the M14, which connects Kherson, Melitopol and Mariupol,” added Seth G. Jones, a senior vice president at the Center for Strategic and International Studies. “Any Ukrainian infantry advancing through these areas would face significant fire from Russian positions, and Bradleys offer helpful firepower and protection for troops.”

The Bradleys, along with British tanks and the armored combat vehicles that France and Germany have agreed to send, could be the vanguard of an armored force that Ukraine could employ in a counteroffensive this winter or spring, government and independent analysts say.

“We think now is the right time to intensify our support for Ukraine,” Britain’s foreign secretary, James Cleverly, said Tuesday while on a visit to Washington. “We can’t allow this to drag on and become a kind of First World War attritional-type stalemate.”

The British Defense Ministry said in a Twitter message last week that in recent weeks, Russia had bolstered defensive fortifications in central Zaporizhzhia, a province in southern Ukraine near the land bridge, and where Russia maintains a large force.

If Ukraine does focus on reclaiming Zaporizhzhia, then preliminary attacks could include hitting targets in nearby Crimea. “A major Ukrainian breakthrough in Zaporizhzhia would seriously challenge the viability of Russia’s ‘land bridge,’” the British assessment said.

Ukraine also has American-provided HIMARS, long-range rocket systems. With the reclaiming last year of Kherson in the south, Ukrainian forward lines can now use them to hit the main supply routes coming out of Crimea, one American military official said in an interview.

This week, top U.S. and Ukrainian commanders will hold a high-level planning meeting in Germany to game out the offensive planning, another senior U.S. official said. The drill, the official said, is meant to align Ukraine’s battle plans with the kinds of weapons and supplies NATO allies are contributing.

Ukrainian officials fear their country cannot survive years of a stalemated conflict while Russia continues to pound cities and towns. So they see little choice but to target Crimea and put it in jeopardy, a senior U.S. official said, noting that the issue has come up at recent high-level meetings at the White House.

Still, despite the additional weaponry, the Biden administration does not think that Ukraine can take Crimea militarily — and indeed, there are still worries that such a move could drive Mr. Putin to retaliate with an escalatory response. But, officials said, their assessment now is that Russia needs to believe that Crimea is at risk, in part to strengthen Ukraine’s position in any future negotiations.

By demonstrating an ability to strike in Crimea, American officials say, Ukraine could show that Russian control is not established. The Biden administration also increasingly believes that hitting Russia’s rear lines coming out of Crimea could severely damage Moscow’s ability to push its front lines further, officials say.

“Without Crimea, the whole thing falls apart,” said Evelyn Farkas, the top Pentagon official for Ukraine during the Obama administration.

Contributing to the shifting thinking is a dampening of fears that targeting Crimea would drive Mr. Putin to use a tactical nuclear weapon, officials say. “It feels to me like increasingly, the administration is recognizing that the threat of Russian escalation is perhaps not what they thought it was earlier,” General Hodges said.

While Ukrainian strikes inside Russia proper still bring escalatory concerns from U.S. officials, Moscow’s reaction to periodic Ukrainian special operations or covert attacks in Crimea, including against Russian air bases, command posts and ships in the Black Sea fleet, has been tempered.

“There is more clarity on their tolerance for damage and attacks,” said Dara Massicot, a senior policy researcher at the RAND Corporation. “Crimea has already been hit many times without a massive escalation from the Kremlin.”

Still, Mr. Putin and the Russian public view Crimea as part of Russia, so strikes there could solidify Russian support for the war.

For their part, U.S. officials say they do not know how Mr. Putin will react if Ukraine attacks Crimea using American-supplied weapons.

Ms. Massicot said none of Ukraine’s handful of attacks on Crimea so far have threatened Russia’s ability to maintain its claim on the peninsula. “So they may not be an accurate test of Russia’s resolve on this point,” she said.

Last month, Secretary of State Antony J. Blinken reiterated standing American policy on Ukraine — that the Biden administration was seeking to help the country take back territory seized during and after the Russian invasion last year.

“Our focus is on continuing to do what we’ve been doing, which is to make sure that Ukraine has in its hands what it needs to defend itself, what it needs to push back against the Russian aggression, to take back territory that’s been seized from it since Feb. 24,” Mr. Blinken told the Wall Street Journal CEO Council summit. By Mr. Blinken’s definition, that territory does not include Crimea.

That position, critics say, has largely given the Russian military an untouchable sanctuary from which to attack Ukraine.

“We have in essence put limits on Ukraine, saying this war is going to be fought on your soil and not on Russian soil,” said Philip Breedlove, a retired four-star Air Force general who was NATO’s supreme allied commander for Europe when Russia invaded Crimea in 2014. “To give Russia sanctuary from which to fight, without fear of reproach, is absolutely absurd. It makes no military sense.”

News - December 15, 2021 0
By Joseph MennSAN FRANCISCO, - The U.S. agency charged with defending the country against hacking said on Tuesday the majority of attacks it has...

News - December 28, 2022 0
PULASKI, Va. (WDBJ) - The town of Pulaski is looking for a first-time homeowner to purchase a brand new home through the Acquire, Renovate...

News - August 14, 2022 0
A delegation of US lawmakers has travelled to Taiwan less than two weeks after House Speaker Nancy Pelosi visited the island in a move...
© 2022 Venture Current is a Flag Media LLC Publication. All Rights Reserved.
VC is part of the FLAG Token rewards network. Clients and partners can use FLAG Tokens for VC products and services.
VC runs 'Automatic' software. Stories posted here come from generic-topic Google news RSS feeds as well as client and partner-approved content.
If a story appears on this page that needs to be deleted due to licensing issues, please message us immediately so we can help you.