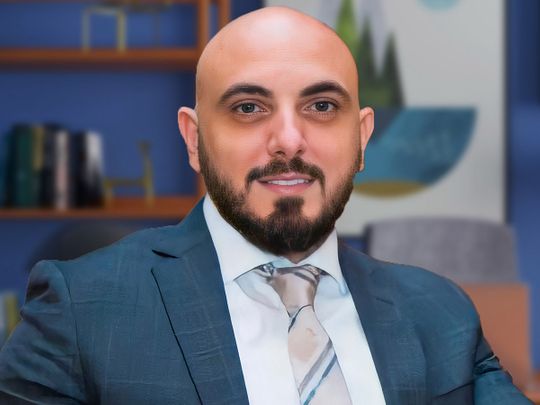 It’s been 12 years since UAE-based Syrian expat Dr Elias Abboud, 42, moved to Dubai to pursue entrepreneurship in the pharmaceutical industry. But long before he did, Abboud worked as a medical representative in Syria, a country he spent his growing years in.

“Three years later, I accepted a salary offer of $3,000 [Dh11,017] from another pharma company. Later, I moved to Dubai, earning Dh8,000 in 2011 as a marketing manager and later about Dh22,000 salary in 2014, right before I ventured out on my own to launched a ‘FemTech’ company specialsing in nanotechnology-based sanitary products for women.”

Femtech is a term applied to a category of software, diagnostics, products, and services that use technology to focus on women’s health.

The term ‘FemTech’ was first coined in 2016 by Danish internet entrepreneur Ida Tin. In the course of just a few years, it has grown to encompass a range of technology-enabled, consumer-centric products and solutions.

Building a base for entrepreneurship

Academically and professionally qualified as a pharmacist and with work experience as a medical representative, he gained insights into the workings of the pharma industry. This knowledge, aside from from his MBA in marketing, became grounds for starting his business.

Abboud revealed how all his savings until that point went into the start-up, after which he got his brother to invest. Abboud accumulated Dh400,000 in savings since 2011 when he launched his business in 2020. “I have kept things on an even keel when it comes to money — which continues to be reflected in the company’s financials.”

How did you fund your start-up costs?

When bootstrapping the business from the get-go, Abboud has re-invested all of the company’s turnover for growth and expansion. However, he intends to hold the company’s first investment round in 2023.

He said, “We are currently in talks with a few VCs [Venture Capital investors] for the same. Concurrently, as the company is growing and the orders are increasing month-on-month, I’m looking to optimise both upstream and downstream processes, especially logistics, by striking new deals and re-negotiating for better price points.”

Venture Capital (VC) is generally used to support startups and other businesses with the potential for substantial and rapid growth. VC firms raise money from limited partners (LPs) to invest in promising startups or even larger venture funds.

Early-stage startups typically cannot access loans or capital markets directly, so they rely on VC funding instead. In exchange for VC funding, founders offer investors a percentage of ownership and perhaps a board seat. VCs can be a critical source of funding.

What led you to do business in female hygiene products?

“In 2012, when I was exploring entrepreneurial opportunities and brainstorming, I came across an article that said 70 per cent of women worldwide faced menstruation-related challenges due to the use of ordinary sanitary pads available in the market. For someone with a medical background and awareness of the pharma landscape, that was a “Eureka” moment for the entrepreneur in me,” he added.

“I began to enhance my understanding of menstrual challenges, got in touch with a few feminine hygiene industry professionals worldwide, and started product development. I was well aware of the challenges ahead but was equally confident about the viability of my products. Although such products existed partially in patents, I could give them the go-to-market readiness through my business.”

However, even though Abboud successfully operated on a B2B (Business-to-business (B2B) model, which is a transaction or business conducted between one business and another, such as a wholesaler and retailer), he soon soon realised that impact was not enough, and his products were lying on distributors’ shelves without reaching the end-users.

Being forced to change to a hybrid e-commerce model

“I realised that direct selling was not financially feasible at the time. Soon, to make matters worse, the pandemic upended the operations, issuing a clarion call to either adapt or quit. As the latter was never an option, I decided to pivot to a hybrid e-commerce model by going all in and receiving some financial support from my brother,” Abboud added.

“We launched the website in August 2020, processed three orders in the first month, followed by 15 in the second and, two years on, processing over a thousand orders monthly. There were many trial-and-error cycles till 2020, but I succeeded in selling over two million packs in 14 countries, ” he said, while adding that within a year of launching the business it made Dh760,000, and in 2022, the start-up made Dh1.7 million.

Lesson #1: Earmark a majority of business turnover in marketing

Among the notable monetary strategies Abboud adopts, earmarking about 70 per cent of the turnover to marketing has been crucial that he learnt early on. He considered that, even if you have an great product, customers will only gravitate towards it if they are aware of it in the first place.

So, for Abboud, bridging the product’s awareness gap in the market is vital. “I adopt a long-term investment approach, which is why I have deployed significant portion of my investment capital into my company’s marketing, upskilling, and team building,” he said.

We launched the website in August 2020, processed three orders in the first month, followed by 15 in the second and, two years on, processing over a thousand orders monthly

He highlighted one of his recent challenges after launching the e-commerce model. “The first batch of products had three sizes. However, after receiving early customer feedback, we realised that our products did not have sizes that were particularly in demand in the GCC market.”

“We wasted no time and increased the total number of products to eight. The process was exacting and financially challenging, but we ended up catering to customers’ expectations and being purpose-driven.”

“I’m constantly looking for competitive price points and market conditions that allow me to negotiate better rates with suppliers and logistics partners, but I’ve realised that it’s key to minimise spending by purchasing raw materials in bulk.”

When asked whether he uses any other saving strategies when it comes to his business and personal finances, Abboud revealed how he divides his and company earnings across multiple categories.

“As a rule of thumb, I set aside about 10 per cent of my monthly earnings as personal savings. When it comes to money made in the business, about 60 per cent goes to marketing, 30 per cent to salaries, and the remaining 10 per cent to miscellaneous.”

News - January 5, 2023 0
Clients pulled $8.1bn in deposits from Silvergate during a “crisis of confidence” late last year, forcing the crypto-focused US bank to sell assets and...

News - January 22, 2023 0
The White House is planning to appoint Jeff Zients as chief of staff after the expected departure of Ron Klain, people familiar with the...

How Mixpanel got its startup groove back by focusing on its core product –...

News - October 12, 2021 0
The startup myth goes something like this: You launch a startup in your dorm room, get into Y Combinator, find product-market fit, experience hockey-stick...
© 2022 Venture Current is a Flag Media LLC Publication. All Rights Reserved.
VC is part of the FLAG Token rewards network. Clients and partners can use FLAG Tokens for VC products and services.
VC runs 'Automatic' software. Stories posted here come from generic-topic Google news RSS feeds as well as client and partner-approved content.
If a story appears on this page that needs to be deleted due to licensing issues, please message us immediately so we can help you.