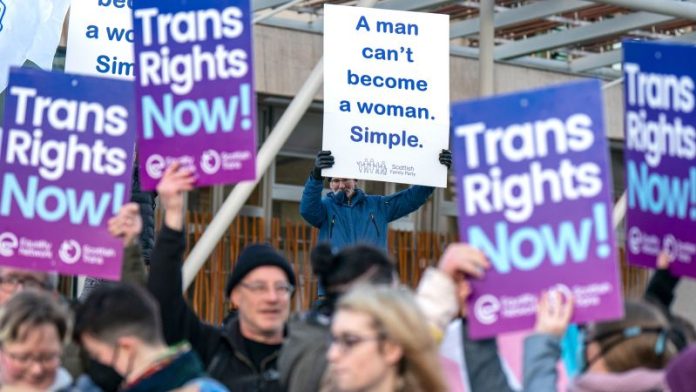 The UK government has blocked a new law intended to allowed trans people in Scotland to change their legal gender without a medical diagnosis – a controversial move that has added fuel to the already highly emotional debate over Scottish independence.

Scottish Secretary Alister Jack announced on Monday that Westminster has taken the highly unusual step of blocking the Scottish bill from becoming law because it was concerned about its impact on UK-wide equality laws.

Here’s what you need to know:

Scotland passed a new law in December to make it easier for people to change their legal gender.

Under the current system, trans people must jump through a number of hoops to change the gender marker in their documents. They must have a medical diagnosis of gender dysphoria – a condition defined by the distress caused by the discrepancy between a person’s body and their gender identity – and prove that they’ve been living in their chosen gender for two years. They also need to be at least 18 years old.

The new rules would drop the medical diagnosis requirement, moving instead to self-determination. The waiting time would be cut from two years to six months, and the age limit lowered to 16.

Campaigners have long argued that the current process is overly bureaucratic, expensive and intrusive. The Scottish government held two large public consultations on the issue and proposed the new, simpler rules.

“We think that trans people should not have to go through a process that can be demeaning, intrusive, distressing and stressful in order to be legally recognized in their lived gender,” the government said when proposing the new rules.

At the end, an overwhelming majority of Scottish lawmakers voted for the change — the final tally was 86 for, 39 against.

The bill sparked emotional reaction on both sides. The debate over the proposal was one of the longest, most heated in the history of the Scottish Parliament and the final vote had to be postponed after it was interrupted by protesters shouting “shame on you” at the lawmakers.

Many human rights and equality organizations and campaigners welcomed the new rules, pointing out to a growing number of democratic countries where self-determination is the norm.

The Equality Network, a leading Scottish LGBTI rights group, said that “after years of increasingly public prejudice against trans people, things have started to move forward.”

But the bill also attracted huge amount of criticism, including from “Harry Potter” author J.K. Rowling, who said the law could have detrimental effect on the rights of women and girls.

Rowling and other opponents of the bill argue the new rules will weaken the protection of spaces that are designed to make women feel safe, such as women-only shelters.

The Scottish government has rejected that argument, saying the law doesn’t change the rules on who can and cannot access single-sex spaces. It also said that experiences from countries that have made similar changes showed no adverse impact on other groups.

Campaigners agreed. “There are no down-sides,” the campaign group Stonewall said. “For example when Ireland did it, nobody else was affected, except trans people who for the first time were able to have their gender recognised in a straightforward and empowering way by the state.”

Scotland has a devolved government, which means that many, but not all, decisions are made at the Scottish Parliament in Holyrood, Edinburgh.

The Scots can pass their own laws on issues like healthcare, education and environment, while the UK Parliament in Westminster remains in charge of issues including defense, national security, migration and foreign policy.

The UK government can stop Scottish bills from becoming laws, but only in a few very specific cases – for example if it believes the Scottish bill would be incompatible with any international agreements, with the interests of defense and national security, or if it believes that the bill would clash with a UK-wide law on issue that falls outside Scotland’s powers.

Under the rules that set out how Scotland is governed, London has four weeks to review a bill after it’s passed by Holyrood, after which it is sent to the King for Royal Assent, the last formal step that needs to happen before it becomes the law.

The issue is highly controversial because tensions between London and Edinburgh over the issue of Scottish independence are already high.

When Scotland last held a referendum in 2014, voters rejected the prospect of independence by 55% to 45%.

However, things have changed since then, mostly because of Brexit.

People in Scotland voted to remain in the EU during the 2016 referendum and the pro-independence Scottish National Party has argued that Scots were dragged out of the European Union against their will, pushing for a new independence vote.

The UK government has said it would not agree to a new independence vote and Britain’s Supreme Court ruled in November that the Scottish government cannot unilaterally hold a second independence referendum.

This is a breaking news story and will be updated.

News - December 27, 2021 0
Lockdown restrictions have been tightened in the Chinese city of Xi’an, which is battling the largest community outbreak the country has seen since the...

a ‘Fed Put’ Is Unlikely With Inflation Still Hot

Investors are selling the funds best placed to protect them

News - May 7, 2022 0
DIY investors have ditched the very funds most likely to beat the market in the long run, new research has suggested. Savers have sold out...

News - August 17, 2022 0
Good morning and welcome to our daily digest of automotive news from around the globe, starting with… Tesla Is Now Dominating Luxury Car Sales In...

News - January 18, 2022 0
AMSTERDAM — A cold case team that combed through evidence for five years in a bid to unravel one of World War II’s enduring...
© 2022 Venture Current is a Flag Media LLC Publication. All Rights Reserved.
VC is part of the FLAG Token rewards network. Clients and partners can use FLAG Tokens for VC products and services.
VC runs 'Automatic' software. Stories posted here come from generic-topic Google news RSS feeds as well as client and partner-approved content.
If a story appears on this page that needs to be deleted due to licensing issues, please message us immediately so we can help you.