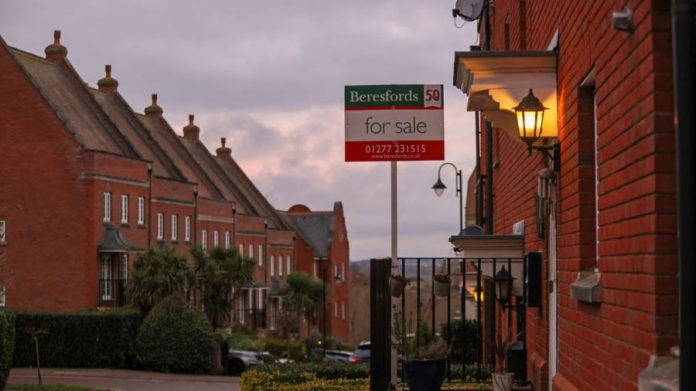 UK house prices have dropped for the fourth consecutive month as rising borrowing costs hit household finances, according to data published on Friday.

Average house prices fell 1.5 per cent between November and December, said mortgage provider Halifax. The decline marks a slowdown from the 2.4 per cent drop recorded between October and November.

The annual rate of house price growth slowed to 2 per cent in December, down from 4.6 per cent in the previous month.

“Uncertainties about the extent to which cost of living increases will impact household bills, alongside rising interest rates, is leading to an overall slowing of the market,” said Kim Kinnaird, director at Halifax Mortgages.

Mortgage rates, which reflect expectations of medium-term borrowing costs, have surged in the past few months, following a series of interest rate rises by the Bank of England in an attempt to rein in high inflation.

The central bank raised interest rates by half a percentage point to 3.5 per cent in December, the highest level in 14 years, warning that further tightening of monetary policy was likely.

Market expectations of further rate rises also jumped after then chancellor Kwasi Kwarteng unveiled his “mini” Budget, containing £45bn of unfunded tax cuts. But they have since returned to their pre-September 23 levels.

BoE data this week showed that, in November, mortgage approvals fell to their lowest level in more than two years.

Avinav Nigam, co-founder of real estate investment platform IMMO, said that as rates increased and banks applied more stringent stress tests, “many who had hoped to purchase using mortgage finance will no longer be able to, with a disproportionate impact on younger and poorer households”.

According to Halifax, house prices rose in all regions of the UK last month, but the rate of growth had slowed.

The north-east registered the sharpest annual slowdown, with house prices rising 6.5 per cent in December, down from 10.5 per cent in November.

The decline in growth rate was smaller in the east of England and West Midlands, where house prices rose 5.5 per cent and 7.3 per cent respectively, compared with 7.2 per cent and 9.1 per cent in November.

Annual house price growth in Wales was 6.1 per cent in December, down from 7.7 per cent in the previous month.

In London, meanwhile, the pace of annual house price growth was 2.9 per cent in the year to December, 2.1 percentage points lower than in the previous month. The average property price in the capital remains well above the national average at £541,239.

Kinnaird at Halifax Mortgages said that “the cost of the average home remains high”, with average house prices greater now than at the start of 2022.

Halifax forecasts an 8 per cent fall in house prices in 2023. That would mean a return to levels not seen since April 2021, before the pandemic-fuelled property boom peaked as people rushed to move into bigger houses.

Gareth Lewis, commercial director of property lender MT Finance, said: “With the inflationary pressures now being felt, buyers are less prepared or less able to stretch themselves even if they wanted to.”

This “will inevitably put downwards pressure on house prices in the new year”, he added.

News - November 8, 2022 0
LOS ANGELES — A Nigerian social media influencer who called himself Ray Hushpuppi and flaunted a lavish lifestyle fueled by his efforts to launder...

News - July 29, 2022 0
The head of carmaker Stellantis has warned about growing Chinese government interference in western businesses operating in the country, days after it ditched its...

News - December 30, 2022 0
Dow Jones futures will open on Monday evening, along with S&P 500 futures and Nasdaq futures. Tesla (TSLA) and China EV makers such as...

News - October 13, 2022 0
Wishful thinkers have made one excuse after another for high and volatile prices. The latest CPI numbers once again prove them wrong. Source

Brent crude climbs above $120 a barrel as China eases lockdowns | Oil and...

News - May 30, 2022 0
Brent crude is on course for a sixth straight monthly climb that would be the longest such run in more than a decade.By Paul Burkhardt...
© 2022 Venture Current is a Flag Media LLC Publication. All Rights Reserved.
VC is part of the FLAG Token rewards network. Clients and partners can use FLAG Tokens for VC products and services.
VC runs 'Automatic' software. Stories posted here come from generic-topic Google news RSS feeds as well as client and partner-approved content.
If a story appears on this page that needs to be deleted due to licensing issues, please message us immediately so we can help you.