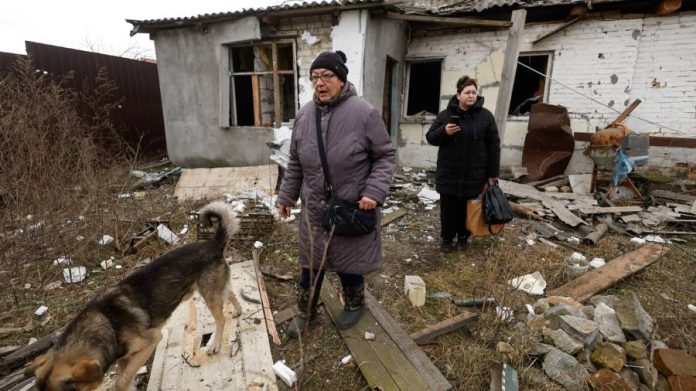 Scores of Russian missiles were fired at Kyiv and other Ukrainian cities on Thursday in what officials described as one of the largest daily barrages of a months-long campaign targeting the country’s energy infrastructure.

Colonel Yuriy Ignat, a spokesperson for Ukraine’s air force, told the Financial Times that in addition to the missiles, Russia had fired at least 11 kamikaze drones at Ukraine early on Thursday.

The number of casualties and the extent of the damage nationwide, almost a year into Vladimir Putin’s full-scale invasion of Ukraine, were not immediately clear.

Ukraine’s air force command said in a statement that “after the night attack of kamikaze drones, the enemy attacks Ukraine from various directions with air and sea-based cruise missiles from strategic aircraft and ships”.

Local officials in two Russian regions on the border said anti-air defences had shot down Ukrainian targets, including drones. The apparent attacks suggested Ukraine was continuing to attack Russian territory after a series of recent strikes on air bases deep behind enemy lines, including two hits on the Engels air base.

In neighbouring Belarus, which has allowed its ally Russia to use the country as a launch pad for attacks without joining the war itself, officials claimed to have shot down a stray Ukrainian air defence missile. Belarus’s foreign ministry said it summoned the Ukrainian ambassador and warned him of “disastrous consequences for all” if any further missiles landed in the country.

In a video posted by state news agency Belta, Anatoly Konovalov, military commander of the western Brest region where the Soviet-era S300 missile reportedly fell, said “residents have nothing to worry about”. He likened the incident to a similar incident last month when a stray Ukrainian anti-aircraft strike landed in Poland, killing two, as Kyiv tried to repel a Russian barrage of similar intensity to Thursday’s strikes.

Ukraine’s defence ministry said it was ready for an “objective investigation” of the incident.

Kyrylo Tymoshenko, deputy head of Ukraine president Volodymyr Zelenskyy’s administration, in a Telegram channel post that included photographs of destruction, said three people were injured, among them a 14-year-old girl, after a missile landed in a residential neighbourhood in the eastern Darnytsky district of Kyiv. Tymoshenko also posted a photograph of a Russian missile that landed in a house in Ivano-Frankivsk, a provincial capital in western Ukraine, but did not explode.

Vitali Klitschko, Kyiv’s mayor, said there were “several explosions in the capital”. He urged residents to charge their phones and stock up on water as “there may be power outages”.

Andriy Sadovyi, mayor of Lviv, the largest provincial capital in western Ukraine where explosions were also heard, said “90 per cent of the city is without electricity”, adding that water supplies could be disrupted.

Explosions were reported in many Ukrainian towns and cities, some close to the frontline, including Odesa on the Black Sea and Kharkiv, the largest city in eastern Ukraine.

Russian missile and kamikaze drone strikes on the Ukrainian electricity grid and heating infrastructure have triggered rolling, hours- and days-long power and heating blackouts in recent months. Moscow launched the campaign this autumn after counteroffensives pushed back Russian forces from swaths of territory in eastern and southern Ukraine, where Moscow still holds close to 20 per cent of Ukrainian territory.

Klitschko said the air force had downed 16 missiles over the capital. 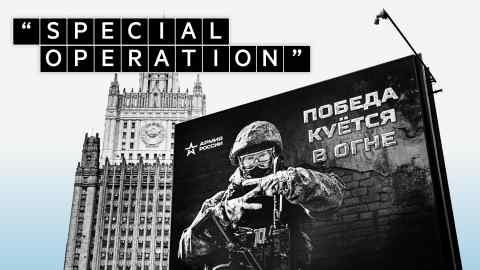 Thursday’s attack comes days after US president Joe Biden said he had approved provision of one Patriot missile battery for Kyiv to be delivered in the coming months. Zelenskyy has for months pleaded for the US and European countries to bolster Ukraine’s air defences, which rely mostly on depleting Soviet-era equipment, with more sophisticated air defence systems.

In a statement on Thursday, Adrienne Watson, a spokesperson for the US National Security Council, said: “This is another example of Putin’s brutality, attacking Ukraine’s critical infrastructure . . . as part of the barbaric war that Russia is waging. The US will continue to provide Ukraine with what it needs to defend itself.”

Kyiv has received a handful of medium-range systems including one Iris-T from Germany, Nasams from the US and Norway, as well as Hawks from Spain.

After Thursday’s attacks, Mykhailo Podolyak, an adviser in Zelenskyy’s administration, criticised western leaders who had urged Kyiv to engage in peace talks, adding that the strikes showed Russia was not, despite recent public calls by Putin for negotiations, interested in peace more than 10 months after he launched his full-scale invasion.

“We’re waiting for further proposals from ‘peacekeepers’ about ‘peaceful settlement,’ ‘security guarantees for the Russian Federation and undesirability of provocations’,” Podolyak added.

News - December 12, 2021 0
This is the tech analysis for Bitcoin (BTC). We will be looking at movements from the day prior and today’s support, resistance, pivot levels,...

News - August 4, 2022 0
Fuel poverty campaigners on Thursday hit out at a decision to pass on rises in wholesale gas and electricity prices to British households much faster after...

News - May 28, 2022 0
After the mass shooting on Tuesday that left 21 dead in Uvalde, people from all over the Laredo community have come together in efforts...
© 2022 Venture Current is a Flag Media LLC Publication. All Rights Reserved.
VC is part of the FLAG Token rewards network. Clients and partners can use FLAG Tokens for VC products and services.
VC runs 'Automatic' software. Stories posted here come from generic-topic Google news RSS feeds as well as client and partner-approved content.
If a story appears on this page that needs to be deleted due to licensing issues, please message us immediately so we can help you.