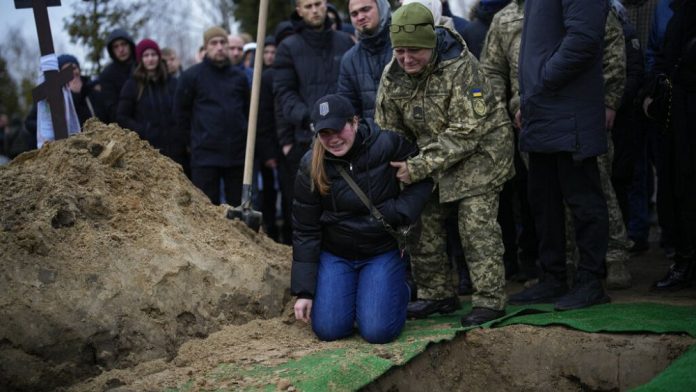 Russia claims it has gained ground in Ukraine

The Russian army said on Saturday it carried out “offensive operations” in the Zaporizhzhia region of southern Ukraine, enabling it to take “advantageous positions”.

“As a result of offensive operations, units of the Eastern Military District took more advantageous lines and positions,” the Russian Defence Ministry said in a statement.

It did not give any further details.

Fighting in the Zaporizhzhia region intensified on Friday, as Russian forces claimed to capture a village in the region, just 50 kilometres from the local capital.

The area is home to Europe’s largest nuclear power stations, with fighting there raising fears of a possible catastrophe.

Yesterday, Ukraine’s energy minister said the situation at the plant was dire due to the phycological state of its Ukrainian staff and the condition of their equipment.

A report by Euronews has looked at the Chechen fighters spilling blood on both sides of the Ukraine war.

Those fighting alongside Ukrainian troops include Russian President Vladimir Putin’s oldest and fiercest enemies, veterans of the separatist wars in their homeland, alongside radical Islamists who have fought in Syria.

Meanwhile, Russia has used Chechens loyal to the Kremlin to discipline and reportedly even execute dissenting soldiers, as well as intimidate civilians in Ukraine.

Chechnya is a restive part of southern Russia in the Caucus region. After the dissolution of the USSR in 1991, its primarily Muslim population tried to break away and establish their own state. This led to two horrific wars during the 90s, which ended in Moscow establishing control over Chechnya.

Chechens waging war for Russia in Ukraine today, say experts, are those who teamed up with Moscow to break the rebellion of their own people during the Second Chechen War from 1999 to 2009.

But Jean-Francois Ratelle, an Assistant Professor at the University of Ottawa, was sceptical about their significance on the battlefield, likening them to a disposable private army.

“These are not elite troops,” he said. “They were most likely used as a grunt force… It’s always easier for a Chechen to be killed in a war than an ethnic Russian.”

“They were treated like cannon fodder for a while”.

Kyiv sour at wavering over tanks

Ukraine lamented the “indecision” of its Western allies on Saturday, after they refused its requests for heavy tanks.

The hesitance will result in the deaths of more Ukrainians, claimed an Ukrainian presidential adviser.

“The indecision of these days kills even more of our fellow citizens”, tweeted Mykhaïlo Podoliak, urging Ukraine’s allies to “think faster”.

“You will help Ukraine with the necessary weapons anyway and realise that there is no other option to end the war”, he pleaded.

Germany has been singled out in particular, following its decision to not deliver Leopard 2 tanks to Ukraine, a position slammed by Ukrainian President Volodymyr Zelenskyy as his country faces a renewed Russian offensive.

In a rare public criticism, foreign ministers from the Baltic states asked Berlin “to supply Leopard tanks to Ukraine now” on Saturday.

Lithuania, Estonia and Latvia claimed it was the “responsibility” of Germany as “Europe’s leading power”.

Zelenskyy said he regretted Germany’s cautious position on Friday evening, saying he was convinced that “there is no other solution” for its Western allies than to deliver tanks to its army.

During a meeting at the Ramstein airbase in Germany on Friday, the fifty or so countries represented did not agree on sending heavy tanks to Kyiv, despite its repeated requests for the heavy weaponry.

Russia claims the heavy tanks would not change anything on the ground, with Kremlin spokesman Dmitry Peskov saying the West was maintaining the “illusion” of a possible Ukrainian victory.

But many experts believe they would be a big advantage for Kyiv in eastern Ukraine, where Russia is back on the offensive after suffering heavy setbacks this autumn.

US labels Wagner a criminal organisation

Washington designated the Wagner Russian paramilitary group as an international criminal organisation on Saturday, denouncing its abuses in Ukraine, purchase of North Korean weaponry and massive recruitment of prisoners.

“The Wagner group currently has some 50,000 people deployed in Ukraine, including 10,000 mercenaries and 40,000 prisoners”, he said, adding its “recruitment methods” were causing “reservations” in the Russian Ministry of Defence.

The announcement could led to sanctions against the mercenary force, which also operates in Africa.

Wagner is led by Yevgeny Prigozhin, a 61-year-old Russian businessman, who was once Putin’s chef. It has been very active in the fierce battle to take Bakhmut in eastern Ukraine.

“We will work tirelessly to identify, expose and target all who assist Wagner,” said Kirby.

According to Washington, the group is growing in power and now rivals Russian forces.

“We have intelligence information that tensions between Wagner and the Department of Defence are escalating,” he said.

“Wagner is becoming a centre of power competing with the Russian army and other Russian ministries”, said the US official, claiming Prigozhin was “advancing” his own interests in Ukraine.

“Wagner makes military decisions on the overall basis of what will generate favour for him… particularly in terms of publicity”, he added.

The Kremlin has denied that there are tension between the Russian army and the paramilitary group, with Kremlin spokesman Dmitry Peskov calling the allegations “manipulation”.

Russia announced on Saturday that it had conducted air defence exercises around Moscow, saying they were to prepare for possible “air attacks” against its critical infrastructure.

In a press release, the Russian Ministry of Defence said the exercises were to “repel air attacks against important military, industrial and administrative infrastructure.”

Social media posts on Friday said air-defence systems were installed in several spots around the Russian capital, including on top of the country’s defence ministry.

Russian officials did not initially comment on the reports, as weaponry resembling a Pantsir-S1 mobile anti-aircraft system was spotted on the roof of a building in central Moscow, some 2 kilometres east of the Kremlin.

Reports earlier in the week said mobile surface-to-air missile batteries were seen near the sprawling Losiny Ostrov forest park on Moscow’s northern border and at another building in the capital.

Since Russia sent troops into Ukraine nearly 11 months ago, it has been hit with several drone strikes or attempted strikes deep inside its territory.

In December, a drone strike killed three people at a military airfield some 600 kilometres from the Ukrainian border.

While the US and other NATO members have provided billions of dollars’ worth of military aid to Ukraine, Washington maintains it will not send weapons that could be used for attacks inside Russia.

News - December 13, 2022 0
Consumer prices rose by 7.1% in November compared to last year, according to a Tuesday report from the U.S. Bureau of Labor Statistics. This...

News - September 1, 2022 0
Extreme flooding has decimated communities in Pakistan and killed more than 1,000 people, many of them children. Millions more have been displaced, their homes...

News - January 18, 2023 0
Bed Bath & Beyond has been in discussions with prospective buyers and lenders as it works to keep its business afloat during a likely...

News - February 5, 2022 0
Britain’s HS2 railway line will speed business travellers on trains built for the future. But a series of well-preserved archaeological finds along its route...

Stuart Kirk: ESG must be split in two

News - September 2, 2022 0
The writer is a former head of responsible investment at HSBC Asset Management and previous editor of Lex Many are surprised by the recent...
© 2022 Venture Current is a Flag Media LLC Publication. All Rights Reserved.
VC is part of the FLAG Token rewards network. Clients and partners can use FLAG Tokens for VC products and services.
VC runs 'Automatic' software. Stories posted here come from generic-topic Google news RSS feeds as well as client and partner-approved content.
If a story appears on this page that needs to be deleted due to licensing issues, please message us immediately so we can help you.