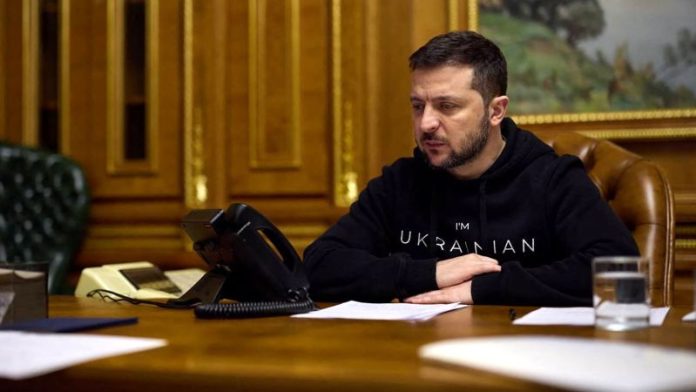 Ukrainian President Volodymyr Zelensky said Monday he was relying on India’s help to implement a “peace formula” during a phone call with Prime Minister Narendra Modi.

The call comes as New Delhi seeks to boost trade ties with Moscow after becoming one of the largest purchasers of Russian oil – defying Western sanctions and providing a vital financial lifeline to Russian President Vladimir Putin as the Kremlin wages an unprovoked war against its neighbor.

“I announced the peace formula and now I count on India’s participation in its implementation,” Zelensky wrote on Twitter. “I also thanked for humanitarian aid and support in the UN.”

In a statement following the call, the Indian government said Modi had repeated his calls “for an immediate cessation of hostilities” and to “revert to dialogue and diplomacy.”

Zelensky presented a 10-point peace formula to world leaders at the Group of 20 summit in Bali, Indonesia, in November. India assumed the G20 presidency this month, and will hold it until next year.

“The Prime Minister explained the main priorities of India’s G20 Presidency, including giving a voice to the concerns of developing nations on issues like food and energy security,” New Delhi’s statement said.

While India has not formally condemned Russia’s invasion of Ukraine, Modi told Putin in September that now is not the time for war, stressing the need to “move onto a path of peace” and reminding the Russian leader of the importance of “democracy, diplomacy and dialogue.”

Modi was also thought to be a key player in the G20’s decision to issue a joint declaration condemning Russia’s war in Ukraine “in the strongest terms.”

India, a nation of 1.3 billion, has repeatedly said its decision to increase purchases of Russian energy is to protect its own interests as a country where income levels are not high.

Russia sent India a list of more than 500 products for potential delivery last month, according to Reuters, including parts of cars, aircraft and trains.

Putin said Sunday he’s ready to negotiate “about acceptable solutions” regarding the war in Ukraine, according to state media. In response, a Zelensky adviser said Moscow “doesn’t want negotiations, but tries to avoid responsibility” as it continues to attack civilians.

News - October 26, 2021 0
Former US President Donald Trump. Brandon Bell/Getty Images Digital World Acquisition stock has been on a wild ride ever since its deal to merge with former...

US government debt under pressure as traders await Fed minutes

News - April 6, 2022 0
A US government debt downturn deepened on Wednesday after a top Federal Reserve official signalled a rapid reversal of the central bank’s pandemic-era support...

Call of Duty: Vanguard – How Many Missions

News - November 6, 2021 0
With Call of Duty: Vanguard now available, those interested in the singleplayer campaign may be wondering how many missions are included. Source

iPhones seized in THIS country from Apple showrooms! Reason is shocking

News - November 25, 2022 0
Brand new iPhones have been seized from Apple stores on Brazil following the new ruling by the government. iPhones haven't come with an in-box charger...
© 2022 Venture Current is a Flag Media LLC Publication. All Rights Reserved.
VC is part of the FLAG Token rewards network. Clients and partners can use FLAG Tokens for VC products and services.
VC runs 'Automatic' software. Stories posted here come from generic-topic Google news RSS feeds as well as client and partner-approved content.
If a story appears on this page that needs to be deleted due to licensing issues, please message us immediately so we can help you.