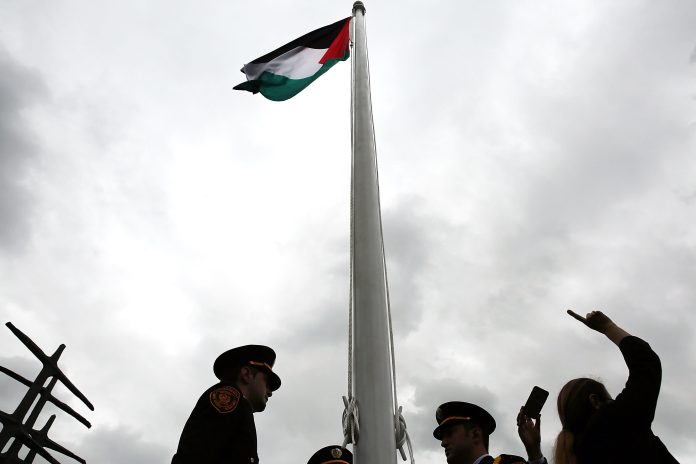 Social media users were shocked and outraged over a recent anti-Israel rally put on by pro-Palestinian protestors at the University of Michigan this week.

Clips of the protest depicted marchers, chanting “Intifada, Intifada! Long live the Intifada” a call to violent overthrow of the Jewish state inspired by Palestinian riots and rebellions against Israel in the late 80s, early 90s, and early 2000s.

“There is only one solution!” a female marcher was seen chanting, as the crowd behind her responded, “Intifada! Revolution!

NEW YORK, NY – SEPTEMBER 30: The Palestinian flag is raised for the first time at the United Nations headquarters on September 30, 2015 in New York City. Following remarks by Palestinian President Mahmoud Abbas, the flag was raised in the rose garden at 1:00pm local time in front of a large crowd of diplomats, reporters and Palestinian supporters. (Photo by Spencer Platt/Getty Images)
(2015 Getty Images)

Marchers, seen walking around the Ann Arbor campus screaming into bullhorns and waving Palestinian flags, were also heard chanting the infamous anti-Israel call to arms: “From the river to the sea, Palestine will be free!”

Media reported that the antisemitic rally was held to protest Vice President Kamala Harris’ Thursday visit to the campus, where she gave a speech on climate policy, and student activism. The protestors appeared to be standing against U.S. government support for the state of Israel.

Another video depicted the marchers outside of campus building in which Harris was giving her speech, saying, “Not another nickel, not another dime, no more money for Israel’s crimes.”

The blatant call to overthrow Israel disturbed prominent Twitter users, who were stunned that such sentiment was expressed so freely on a major American college campus.

Jewish Journal columnist Blake Flayton tweeted, “At the University of Michigan, a call to murder Jews.”

The Manhattan Institute’s Ilya Shapiro put out a snarky comment about the protest, stating, “It’s because @UMich spends only $18 million annually on DEI.”

Former Sen. Ted Cruz, R-Texas, national security advisor Boris Ryvkin condemned the rally, writing, “Terrifying. Echoes of what happened in Charlottesville, except the violent anti-Semites are cut from a different cloth. I expect major media to give this the saturated, wall-to-wall coverage it gave that event with the WH, Democratic leaders and the Squad members condemning it.”

Mediaite reporter Isaac Schorr remarked, “Not making the best case for your ability to handle your own state, kiddos.”

Popular conservative account AG tweeted, “I don’t think most people truly comprehend the level of hate and hostility for Jewish students in several of the top liberal Universities because the school administrations tend to support/enable this stuff.”

Hollywood producer and The Spectator columnist Daniella Greenbaum Davis empathized with the Jewish students at University of Michigan. She tweeted, “The first and second intifada saw terrorists brutally murder innocent civilians. Can’t even imagine being a Jew on Michigan’s campus right now.”

The Horace H. Rackham School of Graduate Studies Building is viewed on the central campus March 24, 2015 at the University of Michigan in Ann Arbor, Michigan.
(Robert Nickelsberg/Getty Images)

Gabriel Hays is an associate editor for Fox News Digital.

Afghanistan: the view from Ground Zero

News - October 16, 2021 0
https://www.youtube.com/watch?v=pu76c3HCKg4 One of the many highlights of the recent Animal Crossing: New Horizons Direct broadcast was the reveal of the 'Happy Home Paradise' DLC. It's essentially...

Congress Approves Big Changes to 401(k) and IRA Accounts: Everything You Need to Know

News - December 23, 2022 0
© 2022 Venture Current is a Flag Media LLC Publication. All Rights Reserved.
VC is part of the FLAG Token rewards network. Clients and partners can use FLAG Tokens for VC products and services.
VC runs 'Automatic' software. Stories posted here come from generic-topic Google news RSS feeds as well as client and partner-approved content.
If a story appears on this page that needs to be deleted due to licensing issues, please message us immediately so we can help you.