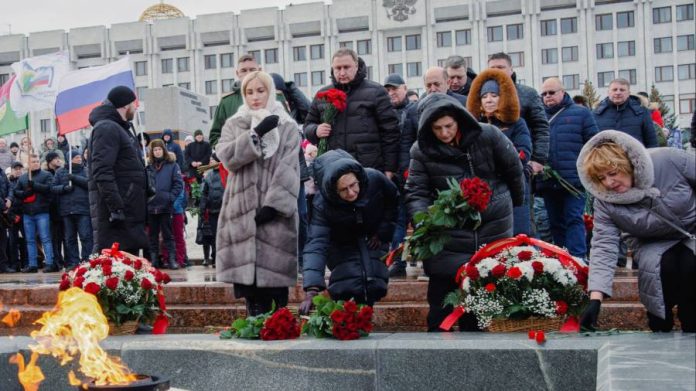 The killing of scores of Russian conscripts in a Kyiv-led missile attack on their barracks in occupied eastern Ukraine has rekindled recriminations in Moscow over the conduct of the war — and raised fresh questions about the military’s capacity to learn from its mistakes.

Russia said 63 of its troops were killed when precision rockets destroyed a vocational college in Makiivka in Donetsk province on New Year’s eve. The school had been commandeered as a temporary barracks for a battalion of mobilised soldiers. The basement was reportedly used as an ammunition store and exploded in the strike.

Kyiv claimed the Russian death toll was several times higher. But the figure of 63 was still the largest number of war deaths in a single incident admitted by Moscow and the first official comment on casualties of any kind since September, a sign that the Kremlin is adjusting its narrative about the war.

The death toll sparked anger among Russian pro-war military bloggers and calls for commanders to be punished for allowing a large number of soldiers to be housed together and in an unprotected building.

“Makiivka is criminal negligence,” Pavel Gubarev, who has fought with pro-Russian forces in eastern Ukraine since 2014, wrote on Telegram. “These are the mistakes of Spring-Summer 2022. We are at war for 11 months. It is important to settle in small groups — everyone knows that. The mobilised might not know but the authorities should know!”

Igor Girkin, a former paramilitary and nationalist critic of Russia’s high command, said Makiivka was “not the first such case — there were also many such cases last year. But our generals are untrainable in principle.”

Ukraine’s general staff on Tuesday claimed about 500 Russian troops were killed or injured in another long-range artillery strike on New Year’s Eve, this time in Chulakivka, in southern Kherson province, but it gave no further detail and there was no confirmation from Russian sources.

Since the summer, Ukrainian forces have used western-supplied precision-guided missiles or Himars, which have a range of some 70km, to attack Russian troop concentrations, command posts, arms depots and supply routes. The missiles have given Ukraine a crucial offensive capability, forcing Moscow to adapt its tactics.

Dara Massicot, an expert on the Russian military at the Rand Corporation think-tank, said: “The Russian military has learned to relocate its command and control and major logistics depots out of Himars range since the late summer. This change has reduced the overall number of high-value targets that Ukrainian forces can strike.”

“Stationing so many at one site was a mistake. With senior commanders staying so far from the front, these sorts of local lapses in judgment are likely to happen. This time, the Ukrainians took advantage of the mistake.”

Officials in the Donetsk People’s Republic blamed the Makiivka attack, according to the Tass state news agency, on conscripts’ using their mobile phones, giving their position away to the Ukrainian military.

But others described this as an attempt to blame the soldiers themselves for the event. “It is, of course, easier to pin the blame on the dead,” the pro-Kremlin Komsomolskaya Pravda war reporter Alexander Kots said, writing on Telegram.

State media journalist and local politician Andrei Medvedev, wrote on Telegram: “A simple soldier with a telephone, it turns out, is to blame.”

Many of the soldiers killed in the Makiivka barracks attack came from the city of Samara in central Russia, Dmitry Azarov, the regional governor, said on Monday.

The city on Tuesday held a memorial service for the dead — a rare official public display of grief over soldiers killed in the war. The Kremlin has previously tried to distance the conflict from the public, naming its invasion a “special military operation” and avoiding acknowledging its human costs.

But since announcing a mass mobilisation in the autumn, Russia’s leaders have increasingly depicted the conflict as an all-out, patriotic war. In his traditional New Year’s Eve address, shown on state television just before midnight, president Vladimir Putin for the first time stood not in front of the Kremlin but surrounded by soldiers in fatigues.

“Russia has been able to ride out waves of anger from Russian social media before,” Massicot said. “If the Kremlin wants to reduce pressure, it can probably find local commanders responsible and make a display of punishing them, if they choose. This event is different because it involves mobilised forces, which might explain why Russia was quick to offer up a number for casualties, which was very likely an undercount given the scale of destruction.”

Ekaterina Kolotovkina, the wife of the commander of the 2nd Guards Combined Arms Army, a military division traditionally stationed in the Samara region, addressed the gathering.

“We are constantly on the phone to the wives of our guys. This is very tough, tough and frightening,” Kolotovkina said.

However, Kolotovkina, who has appeared several times on Russian state media giving patriotic interviews as a soldier’s wife, ended on a defiant note, saying she had asked her husband to “avenge” the deaths. “We will not be broken. Grief unites us,” she said.

News - November 4, 2022 0
The ability to play hundreds of Steam games on a Chromebook is becoming easier today as Google rolls out beta support for the digital...

Here is the next problem for the stock market: Morning Brief

News - September 27, 2021 0
This article first appeared in the Morning Brief. Get the Morning Brief sent directly to your inbox every Monday to Friday by 6:30 a.m....
© 2022 Venture Current is a Flag Media LLC Publication. All Rights Reserved.
VC is part of the FLAG Token rewards network. Clients and partners can use FLAG Tokens for VC products and services.
VC runs 'Automatic' software. Stories posted here come from generic-topic Google news RSS feeds as well as client and partner-approved content.
If a story appears on this page that needs to be deleted due to licensing issues, please message us immediately so we can help you.