SINGAPORE — Amid the great U.S.-China tech divide, Southeast Asia and its fast-growing digital markets have become a main battleground for the digital behemoths of both superpowers.

There, Amazon.com, Microsoft, Google, Alibaba Group Holding and other players are investing heavily in cloud computing — services that provide processing power and data storage to all sizes of corporations and government institutions.

A massive 170,000-sq.-meter structure is going up in Tanjong Kling, about a 20-minute drive from Singapore’s city center. The 11-story building is taking on the appearance of a vast logistics center or warehouse. However, strict security teams and surveillance cameras around the site betray a much more critical piece of infrastructure. As a reporter pulled out his smartphone to take a photograph of the construction site, a security guard rushed up and warned, “This is private property. No photos allowed.”

Once completed, the “private property” facility will be filled by rows and rows of servers hosting hundreds of millions of internet users’ sensitive personal information. It will be Facebook’s first custom-built data center in Asia. The company has announced it will invest 1.4 billion Singapore dollars (US$1 billion) in the project.

It is one of many data centers that global tech giants are building in Southeast Asia. With a stable political system, an abundance of skilled tech workers and its connection to an undersea communications cable that links to the rest of the world, Singapore has become a prime spot for the big players of tech vying for slices of Southeast Asia’s swelling need for cloud services.

According to real estate service company Cushman & Wakefield, Singapore data centers have 410 megawatts of capacity, with another 170 megawatts on the way, making the city-state a global hub for data, matching the likes of Frankfurt and Chicago.

But Singapore stands out in that it is also a strategic foothold for Chinese tech companies such as Alibaba and Tencent, who are competing for the same clients.

Amazon is the global leader among cloud service providers. Its Amazon Web Services (AWS) controlled more than 30% of the worldwide market in the second quarter of 2021, according to research company Canalys. It is currently adding infrastructure in Jakarta, Indonesia, which is expected to be operational by the end of 2021 or early 2022.

The data centers will be AWS’ second location in Southeast Asia. AWS centers have been operating in Singapore since 2010.

“AWS sees tremendous potential in Southeast Asia,” Conor McNamara, AWS’ managing director for ASEAN operations, said via email. “Across the board, we see all segments, including startups, enterprises, and small and medium-sized businesses, continuing to drive cloud adoption.”

Microsoft, the world’s second-largest cloud service provider, early this year announced it would establish data centers in Indonesia and Malaysia. It is bullish on the region’s growth potential.

“If you look at Southeast Asia, [there are] 650 million people, that makes it [almost] 50% bigger than in the European Union [446 million],” Microsoft Asia President Ahmed Mazhari said. And the region’s “mobile penetration and mobile-first approach that is unparalleled in the world.”

Mazhari also sees ambition. “We continue to see growth traction from somebody that wants to go from idea to building a unicorn, to micro SMEs, to the biggest enterprise of the world,” he said.

Alibaba, No. 4 in the global cloud service market, behind Amazon, Microsoft and Google, in June announced it would invest up to $1 billion over the next three years to nurture developers and support Asia-Pacific startups. “We are seeing a strong demand for cloud-native technologies in emerging verticals across the region, from e-commerce and logistics platforms to fintech and online entertainment,” Jeff Zhang, president of Alibaba Cloud Intelligence, said in a news release.

The company’s cloud division launched its third data center in Indonesia and plans to launch one in the Philippines this year.

Cloud services are becoming a revenue pillar. In the second quarter of this year, the global market was worth $47 billion, up 36% from the year-earlier period, according to Canalys.

AWS’ net sales grew to $14.8 billion in the same quarter, up 37% from the year-earlier period, with AWS accounting for more than half of Amazon’s consolidated operating income.

Until recently, the global market has been bifurcated. 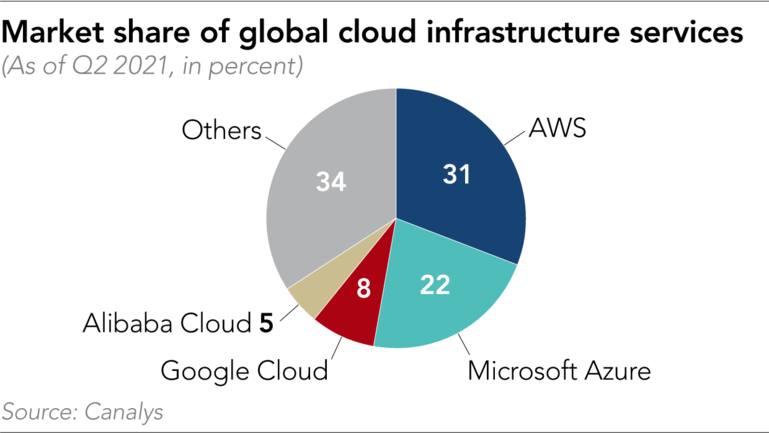 In China, Alibaba and Tencent have been able to dominate mainly due to restrictions imposed upon foreign tech companies. In the West, Amazon, Microsoft, Google and other players rigorously compete.

In recent years, however, Alibaba has been pushing into the West, including the United States. However, this ambition is dimming as Washington is increasingly concerned over possible security risks for companies that avail themselves to Chinese cloud services.

Amid this global dichotomy, Southeast Asia has emerged as a battleground where Chinese and Western companies “can compete with each other,” said Kevin Imboden, senior research manager of Data Center Insights, Global Research, at Cushman & Wakefield.

Amazon and Microsoft provide cloud services to Singapore-based supper app Grab, according to both companies. Alibaba on its website boasts of having Indonesian e-commerce leader Tokopedia as a key cloud customer, and Amazon says AWS also provides services to Tokopedia.

Among the region’s unicorns, startups with valuations of $1 billion or more, Carsome, a Malaysia-based used car marketplace, and Carro, a Singapore online car sales platform, use AWS. Bukalapak, one of Indonesia’s largest e-commerce platforms and Tokopedia competitor, uses Microsoft’s Azure. Alibaba is one of Tokopedia’s largest shareholders, and Microsoft has stakes in Grab and Bukalapak.

U.S. and Chinese cloud companies “are very focused on acquiring market share,” Imboden said, even “at the expense of profit.”

According to Google, Temasek Holdings, and Bain & Co., the gross merchandise value of the region’s internet economy is expected to grow threefold, to $300 billion, by 2025 from 2020. Cloud services, which serve as the infrastructure of this burgeoning ecosystem, will surely expand, too.

However, geopolitical risks are also emerging.

According to a report by China’s Caixin news service, Chinese internet technology company ByteDance, which owns TikTok, has stopped using Alibaba’s cloud for its businesses outside China.

Last year, the Trump administration attempted to ban the popular social media app in the U.S., citing security risks. In June, U.S. President Joe Biden withdrew a series of executive orders related to the banning of TikTok but ordered a broad security review of apps connected to “foreign adversaries,” including China.

Alibaba on Aug. 3 announced cloud computing revenue of 16.05 billion yuan ($2.48 billion) for the quarter through June, up 29% from a year earlier. However, the company’s earnings release states that the cloud computing division’s “year-on-year revenue growth began to moderate since the last quarter primarily because of revenue decline from a top cloud customer in the Internet industry that has stopped using our overseas cloud services with respect to their international business due to non-product related requirements.”

Eric Schmidt, a former Google CEO and the chair of the U.S. National Security Commission on Artificial Intelligence, wonders if Alibaba can attract clients in the West. “Alibaba Cloud and so forth are good enough that you could build on the Chinese side, but you are not going to use them in the West. Similarly, American clouds are very, very good, but you can’t use them in China,” he recently told Nikkei Asia.

“As an entrepreneur, you would prefer to have one [cloud provider] but you live with two [one in China and one everywhere else].”

While well-funded unicorns and large corporations can minimize risks by dividing their cloud needs between Western and Chinese companies, many small and mid-size companies, as well as startups, lack the wherewithal to follow suit.

With American and Chinese players competing for slices of Southeast Asia, businesses in the region “need a geopolitical strategy” and might even have to “pick sides,” said Abishur Prakash, a geopolitical futurist at Toronto-based consultancy Center for Innovating the Future.

“What is your long-term strategy? What geographies do you plan to operate in? Which consumers do you want to access the most?” he asks. “Those should be the vectors that you [use to] decide whose cloud computing infrastructures to use.”

What will I get from California’s $9.5-billion gas tax relief plan?

News - February 22, 2022 0
Chinese Foreign Minister Wang Yi expressed "concern" about the situation in Ukraine in a phone call with US Secretary of State Antony Blinken, according...

5 things to know before the stock market opens Thursday, June 16

News - June 16, 2022 0
Here are the most important news, trends and analysis that investors need to start their trading day:1. Wall Street set to plunge as stocks'...

Woman turns to Action 9 for help when she still got internet bills after...

News - April 14, 2022 0
CHARLOTTE — A woman told Action 9 she was moving to another state and gave her cable company its equipment back, but she said...

News - October 29, 2021 0
Republican lawmakers rejected the nonpartisan agency's initial proposal. The second proposal, which was approved Thursday, is more risky than the first as three seats are competitive....

Pet Insurance Can Help Keep Costs for Your Furbaby in Check | Smart Change:...

News - December 20, 2021 0
“I’d say at least half of the clients I come in contact with have money concerns,” Dr. TB Thompson, a Phoenix-based veterinarian at Natural...
© 2021 Flag Media Group. All Rights Reserved. ** TELL YOUR STORY **
We do not generate news. This digital publication and all Flag Media publications curate Google news using Google RSS Feeds.
Please advise if any posts need to be removed for licensing/copyright issues.