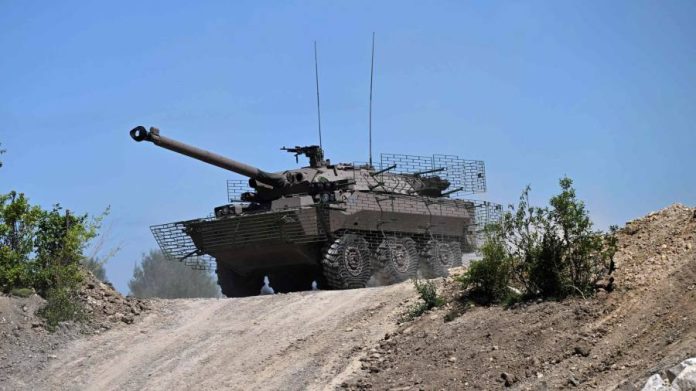 Germany and the US will send armoured fighting vehicles to Ukraine, the White House said, in a move that will deliver a big boost to Kyiv’s offensive capabilities.

The deliveries mark a huge shift for Germany’s chancellor Olaf Scholz, who has been highly reluctant to provide Ukraine with heavy weaponry amid fears it could drag Nato into the war.

Scholz spoke by phone with US president Joe Biden on Thursday to co-ordinate the two governments’ positions. The US agreed to send Bradley fighting vehicles, while Germany is providing Marder infantry fighting vehicles and will also join the US in sending a Patriot missile battery to Kyiv.

The leaders “expressed their common determination to continue to provide the necessary financial, humanitarian, military and diplomatic support to Ukraine for as long as needed”, according to a joint statement.

Pressure on Scholz to shift position has grown since Emmanuel Macron, president of France, agreed to supply AMX-10s ‘tank killers’ to the Ukrainian armed forces — a move billed by the Élysée Palace as the first delivery of western-made tanks to the country.

“Scholz was forced to act after Macron pressed ahead,” said one person familiar with the discussions.

Kyiv has long been calling for tanks and other lethal aid as it faces a grinding and slow battle across a long front line in the country’s east. Armoured vehicles can play an important role in helping Ukrainian forces conduct combined arms manoeuvres as Russia and Ukraine are fighting for small gains on a heavily dug-in area.

Kyiv has continued to ask for Nato-standard modern battle tanks, such as the US-made Abrams or the German-made Leopard 2, but officials have held off over concerns about escalation with Russia and the logistics associated with maintaining them.

But the provision of infantry fighting vehicles still represents a major change in policy. Earlier on Thursday, a senior minister in Scholz’s government implied that a shift was in the works. “In the past, we have always tailored our support for the Ukrainian army to the situation,” said Robert Habeck, economy minister and vice-chancellor.

“Now France has decided to supply light armour systems, and the US has indicated plans to do the same. That will certainly influence the German debate as well,” he said.

When asked if Germany would ever send tanks to Ukraine, Scholz has repeatedly said Berlin would never go it alone, and that no country had so far supplied western-designed tanks to Kyiv.

But that argument may no longer prove sustainable after the French move on AMX-10s. Annalena Baerbock, foreign minister, implied on Thursday that if the French and the US modify their positions, so will Germany. “We are going together with our partners,” she said during a trip to the UK. “We align with our partners as we have done in the past 11 months.”

The Marders and Bradleys will be warmly welcomed by the Ukrainian government, but it will probably continue to demand more. In his nightly televised address on Wednesday, president Volodymyr Zelenskyy said there was “no rational reason why Ukraine has not yet been supplied with western-type tanks”.

Scholz has steadily ratcheted up the level of support he has provided to Ukraine over the past year. Initially he adopted a highly cautious approach, but as international and domestic pressure increased the chancellor agreed to dispatch heavy weapons, including air defence systems.

Up till now, however, he has stopped short of providing kit such as the Marder or the more heavy duty Leopard-2s.

So far, only Poland and the Czech Republic have sent tanks, about 280 in total, drawn from their Soviet-era weapon stocks. General Valeriy Zaluzhnyi, the head of Ukraine’s armed forces, has said he needs at least 300 more tanks and 700 armoured troop carriers and fighting vehicles to push Russian forces back to their pre-February 24 lines.

WhatsApp will hide your ‘last seen’ status from strangers by default

News - December 13, 2021 0
WhatsApp is rolling out a new privacy measure that hides your “last seen” status from people you don’t know or haven’t chatted...

This Is What a Stock-Market Earnings Slowdown Looks Like. Things Could Take a Turn...

News - December 3, 2021 0
Google Photos’ Locked Folder feature, which promises to keep sensitive photos out of your main photo roll, is starting to roll out...
© 2022 Venture Current is a Flag Media LLC Publication. All Rights Reserved.
VC is part of the FLAG Token rewards network. Clients and partners can use FLAG Tokens for VC products and services.
VC runs 'Automatic' software. Stories posted here come from generic-topic Google news RSS feeds as well as client and partner-approved content.
If a story appears on this page that needs to be deleted due to licensing issues, please message us immediately so we can help you.