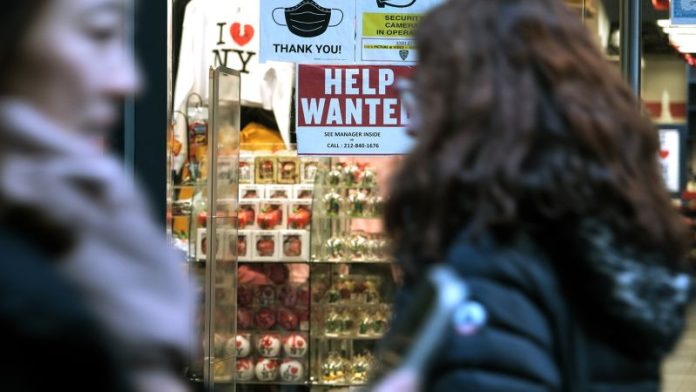 The number of available jobs in the United States totaled 10.46 million in November, according to data released Wednesday by the Department of Labor.

That’s more than the 10 million total job openings that economists were expecting, according to Refinitiv, and slightly lower than the upwardly revised October total of 10.51 million.

The robust number of job openings remains “a testament to the resilience of demand for labor on Main Street, even as job openings tumbled on Wall Street,” said Julia Pollak, chief economist with ZipRecruiter, in a tweet posted shortly after the report was released.

There were still about 1.7 job openings for each job seeker in November, unchanged from October, according to data from the Bureau of Labor Statistics. The Federal Reserve closely monitors this ratio, since tightness in the labor market means employees have greater leverage to seek higher wages, which in turn drives up inflation.

Job hiring inched down to 6.06 million in November from 6.11 million in October, according to the report. Layoffs fell to 1.35 million from 1.45 million, and the number of people quitting their job increased to 4.17 million from 4.05 million.

“The Great Resignation is far from over — quits surged in November, to 4.2 million,” Pollak said. “They have now been above 4 million for 18 straight months, after coming in at 3.4 million before the pandemic and averaging 2.6 million in the prior years.”

The data comes ahead of the government’s closely watched monthly jobs report, which is set to be released on Friday and is expected to show that 200,000 jobs were added to the US economy in December.

While that number is slightly lower than in previous months, it caps off an unusually strong year for the labor market — all the more so, given the Fed’s efforts to slow the economy in order to rein in demand and inflation.

This story is developing and will be updated.

News - July 9, 2022 0
Dow Jones futures will open on Sunday evening, along with S&P 500 futures and Nasdaq futures, with Twitter stock in focus as Elon Musk...

News - July 24, 2022 0
Democrats have carved out quite a niche for themselves as the party of the have-nots, even if it’s mostly a hypocritical marketing ploy. Bernie...

Analysis: Markets must face up to tightening financial conditions

News - May 9, 2022 0
May 9 (Reuters) - Already sitting on double-digit losses this year, stock market investors must brace for more, as the realisation sinks in that...
© 2022 Venture Current is a Flag Media LLC Publication. All Rights Reserved.
VC is part of the FLAG Token rewards network. Clients and partners can use FLAG Tokens for VC products and services.
VC runs 'Automatic' software. Stories posted here come from generic-topic Google news RSS feeds as well as client and partner-approved content.
If a story appears on this page that needs to be deleted due to licensing issues, please message us immediately so we can help you.