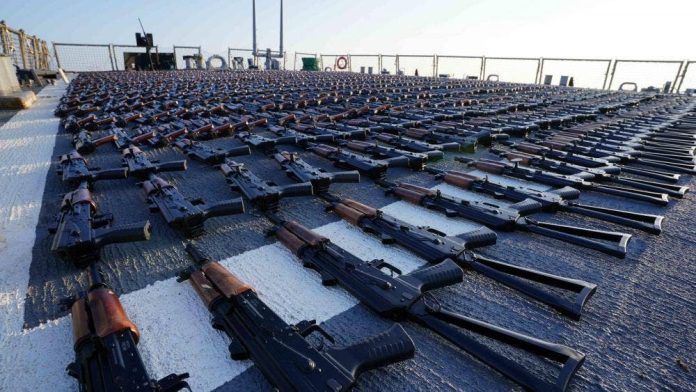 The U.S. Navy seized more than 2,000 assault rifles after halting a suspected smuggling vessel on its way from Iran to Yemen, the Navy announced Tuesday.

The USS Chinook deployed a boarding team to the vessel in the Gulf of Oman with support from the USS Monsoon and USS The Sullivans on Jan. 6, discovering a crew of Yemeni nationals. The U.S. confiscated 2,116 assault rifles and is in the process of repatriating the ship and its crew, according to a Navy statement.

“This shipment is part of a continued pattern of destabilizing activity from Iran,” said Vice Adm. Brad Cooper, commander of U.S. Naval Forces Central Command, U.S. 5th Fleet and Combined Maritime Forces. “These threats have our attention. We remain vigilant in detecting any maritime activity that impedes freedom of navigation or compromises regional security.”

The Yemeni-crewed ship was the third fishing vessel to be found smuggling lethal aid from Iran to Houthi rebels in Yemen since November. U.S. forces also seized more than 50 tons of ammunition rounds, fuses and propellants for rockets on Dec. 1. USS The Sullivans, USS Hurricane and USCG John Scheuerman also intercepted more than 70 tons of chemicals used to make rocket propellant and explosives on Nov. 8.

The U.S. Navy confiscated 2,000 assault rifles being smuggled out of Iran to Yemen.
(NAVCENT Public Affairs)

The U.S. Navy routinely patrols common smuggling routes in the Gulf of Oman. Iranian vessels smuggling weapons to Yemen must travel east through the gulf before heading south to Yemen.

International law and the U.N. Security Council ban the direct or indirect supply, sale or transfer of weapons to Houthi rebels in Yemen.

The U.S. Navy has a long history of interactions with Iranian vessels in the area as well. Three Islamic Revolutionary Guard Corps Navy vessels (IRGCN) confronted a U.S. convoy in the Strait of Hormuz in June 2022, with one of the vessels closing within 50 yards of the USS Sirocco.

“One of the IRGCN vessels approached Sirocco head-on at a dangerously high speed and only altered course after the U.S. patrol coastal ship issued audible warning signals to avoid collision. The Iranian vessel also came within 50 yards of the U.S. Navy ship during the interaction, and Sirocco responded by deploying a warning flare,” the U.S. Navy said of the incident.

U.S. warships fired warning shots at Iranian boats during a similar encounter in May 2021.

News - November 8, 2022 0
Former Bank of England governor Mark Carney’s coalition of more than 500 financial institutions that have signed up to net zero is named as...

iPhone turns 15: How Apple forever changed the way we communicate

Afghans flee the Taliban: in pictures

News - August 21, 2021 0
Afghanistan updatesSign up to myFT Daily Digest to be the first to know about Afghanistan news. Thousands of Afghans have fled from the Taliban this...

News - September 15, 2021 0
Due to the amount of vaccinations across our region, we will no longer be updating the COVID-19 hotline.As of Wednesday, September 15, Virginia has...
© 2022 Venture Current is a Flag Media LLC Publication. All Rights Reserved.
VC is part of the FLAG Token rewards network. Clients and partners can use FLAG Tokens for VC products and services.
VC runs 'Automatic' software. Stories posted here come from generic-topic Google news RSS feeds as well as client and partner-approved content.
If a story appears on this page that needs to be deleted due to licensing issues, please message us immediately so we can help you.