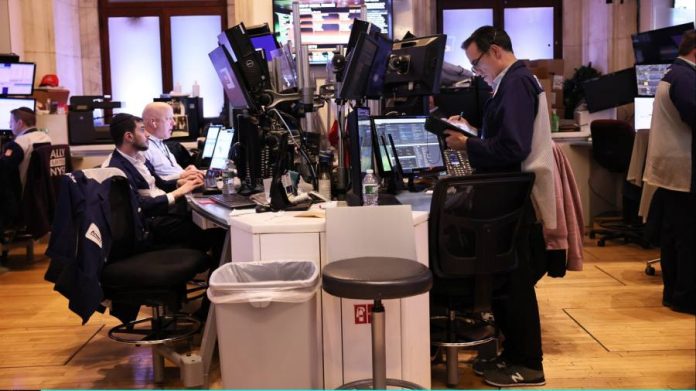 US stocks edged higher on Tuesday even after Federal Reserve officials reiterated that interest rates would probably hover above 5 per cent for much of 2023.

Rising prices for healthcare and consumer cyclical stocks helped Wall Street’s blue-chip S&P 500 add 0.4 per cent in mid-afternoon trading. The tech-heavy Nasdaq Composite gained 0.6 per cent as investors shook off warnings on Monday from the presidents of the US central bank’s San Francisco and Atlanta branches that high inflation meant interest rates had further to climb.

Arguments for either move depend to a large extent on December’s consumer price index data, which will be published on Thursday. Market participants surveyed by Refinitiv expect prices to have risen 6.5 per cent year on year in the final month of last year, down from an increase of 7.1 per cent in November.

“A cool surprise will tilt the expectations to a 25 [basis point] hike and we’ll get some equity upside,” said Mike Zigmont, head of trading and research at Harvest Volatility Management. “Hot data will result in 50 [basis point] expectations and significant downside. The market is not symmetrically primed.”

US government bonds have rallied since the start of the year on the back of signs of slowing wage growth in the world’s biggest economy — a critical measure of pressure on prices for Fed officials who insist their approach to monetary policy will be “completely data-dependent”.

On Tuesday, however, the yield on the two-year Treasury note, which is sensitive to interest rate expectations, rose 0.05 percentage points to 4.25 per cent.

The 10-year Treasury yield, seen as a proxy for borrowing costs around the world, added 0.1 percentage points to 3.62 per cent. Bond yields move inversely to prices.

A measure of the dollar’s strength against a basket of six peers gained 0.2 per cent on the day. The euro hovered around its highest levels against the greenback since June, at $1.074.

Elsewhere in equity markets, Europe’s Stoxx 600 shed 0.6 per cent, eating into strong gains since the beginning of January, while London’s FTSE 100 fell 0.4 per cent and Germany’s Dax lost 0.1 per cent.

10-year Treasury yield in focus ahead of Fed meeting

News - June 14, 2022 0
Treasury yields fell on Tuesday as investors assessed the prospect of the Federal Reserve taking the most aggressive step yet in its fight to...

News - February 10, 2022 0
Yesterday, Electronic Arts announced a new Sims 4 expansion called My Wedding Stories that, as the title suggests, is all about getting hitched: You...

News - January 8, 2022 0
The development comes as the tennis World No. 1 is confined to a hotel in Melbourne as he mounts a legal challenge to the...

News - February 6, 2022 0
The number of people experiencing food insecurity was one-fifth higher in January than six months previously, according to a survey that showed families in...
© 2022 Venture Current is a Flag Media LLC Publication. All Rights Reserved.
VC is part of the FLAG Token rewards network. Clients and partners can use FLAG Tokens for VC products and services.
VC runs 'Automatic' software. Stories posted here come from generic-topic Google news RSS feeds as well as client and partner-approved content.
If a story appears on this page that needs to be deleted due to licensing issues, please message us immediately so we can help you.