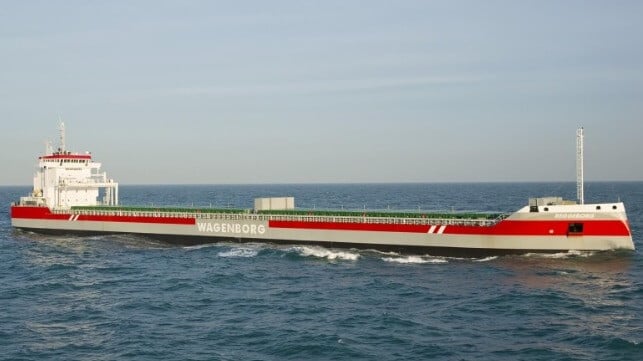 The U.S. Coast Guard and a local Delaware fire department are reporting that they were called out on Christmas afternoon for five seafarers suffering from possible carbon monoxide exposure. It is unclear how the crewmembers of a general cargo ship anchored offshore were exposed to the deadly gas.

The 22,000 dwt Reggeborg register in the Netherlands was anchored 11 miles east of Indian River Bay off the coast of Delaware. AIS data shows the vessel, which is 557 long, had been anchored since December 19 arriving from Jacksonville, Florida as part of a voyage that began in Finland in October. The vessel was built in Germany in 2014 and at the time was part of a class of vessels that were the largest in the Wagenborg fleet and the biggest ever built at Ferus Smit shipyards.


The Coast Guard was called to the vessel Reggeborg after the mariners experienced possible carbon monoxide poisoning and required medical assistance. https://t.co/NkxR8QQVNB


The USCG’s Sector Delaware Bay Command Center received the report that five mariners aboard the motor vessel Reggeborg had experienced possible carbon monoxide poisoning and required medical assistance on Sunday afternoon. They responded by sending a Station Indian River 47-foot motor lifeboat boat and the Lewes Fire Department also responded with one of its boats. The Delaware State Troopers, Delaware Fish and Wildlife, and Department of Natural Resources also assisted.

Two of the crewmembers were removed from the ship by the U.S. Coast Guard and transferred to its station for further medical assistance. The three others from the ship were transferred to the Bethany Fire Department for medical assistance. There is no word on the condition of the five seafarers but it is believed that the exposure was non-life threatening.

The Reggeborg is now in the Big Stone Beach Anchorage near the entrance to Delaware Bay.

The Federal Reserve’s ethics scandal is not resolved

News - November 3, 2021 0
The Federal Reserve’s reputation has been severely damaged by revelations that top Fed officials routinely ignored their own code of ethical conduct and that...

News - August 25, 2021 0
(Bloomberg) -- Asian stocks are set for a mixed start Thursday as traders await more clues about the regulatory outlook in China as well...

News - October 28, 2021 0
In a Japanese election that has struggled to ignite much public enthusiasm between uniform candidates trotting out similar campaign pledges, Kiyoto Tsuji is an...

US investors balance ‘Fomo’ and geopolitics in China

News - January 19, 2023 0
There’s a long-running gripe among China-focused western bankers that the further an investor is from Beijing, the more negatively they view the Middle Kingdom....

News - January 18, 2023 0
People cross a street in Tokyo's Ginza district. The Bank of Japan left its monetary policy unchanged on Wednesday.Philip Fong | Afp | Getty...
© 2022 Venture Current is a Flag Media LLC Publication. All Rights Reserved.
VC is part of the FLAG Token rewards network. Clients and partners can use FLAG Tokens for VC products and services.
VC runs 'Automatic' software. Stories posted here come from generic-topic Google news RSS feeds as well as client and partner-approved content.
If a story appears on this page that needs to be deleted due to licensing issues, please message us immediately so we can help you.