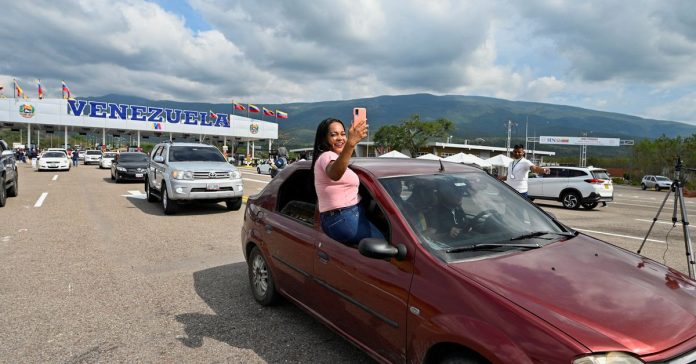 CARACAS, Dec 31 (Reuters) – Venezuela and Colombia will fully reopen their shared border on January 1 to allow passage of cargo and passenger transport via the cross-border Tienditas bridge, Colombia Migration said in a statement on Saturday.

Colombian authorities have said since September that the reopening of the shared 2,200 kilometers (1,367 miles) border between the two countries would be progressive.

Last week, Venezuelan government officials were supervising the infrastructure of the Tienditas bridge.

“We completely reopen the border between our countries in order to guarantee the movement of cargo and passengers, and to promote trade and tourism in Colombia and Venezuela, not only by land but also by air and river”, said Colombia’s Minister of Transport Guillermo Reyes Gonzalez.

Elsewhere, people and cargo can already cross the border via two bridges in Tachira as well as the western Zulia state. Flights between the capitals Caracas and Bogota resumed in November.

The commercial exchange between the two countries is worth around $580 million, according to official data from Colombia.

News - July 19, 2022 0
Pimco has bought more than €1bn of loans from banks that underwrote Apollo’s takeover of a French payments business, in the latest example of...

News - October 11, 2022 0
The IMF has said there is a growing risk that the global economy will slide into recession next year as households and businesses face...

News - July 2, 2022 0
Parts shortages and pandemic-related production shutdowns at Tesla’s plant in Shanghai caused a big drop in the electric car maker’s latest global vehicle deliveries,...
© 2022 Venture Current is a Flag Media LLC Publication. All Rights Reserved.
VC is part of the FLAG Token rewards network. Clients and partners can use FLAG Tokens for VC products and services.
VC runs 'Automatic' software. Stories posted here come from generic-topic Google news RSS feeds as well as client and partner-approved content.
If a story appears on this page that needs to be deleted due to licensing issues, please message us immediately so we can help you.