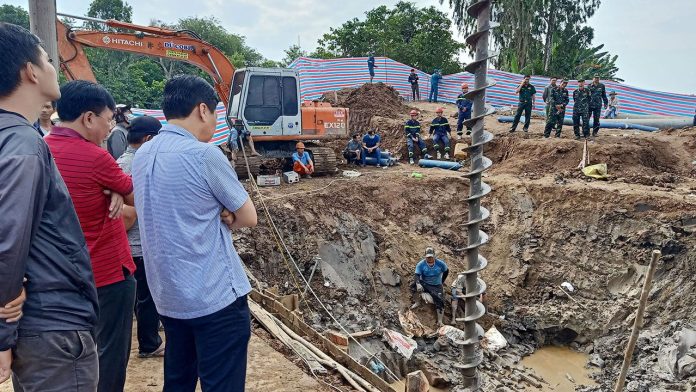 Hundreds of rescuers in Vietnam were battling for a third day Monday to save a 10-year-old boy who fell more than 100 feet down a shaft at a construction site on New Year’s Eve.

The boy was reportedly heard calling for help shortly after he fell into the shaft of a hollow concrete pile just 25 cm (10 inches) in diameter at a bridge construction site in the Dong Thap province Saturday morning while searching for scrap metal with friends.

But as of Monday, he hasn’t been responding to rescuers, who lowered a camera to help locate the boy’s position down the estimated 115-foot-long support pillar, according to Reuters.

Efforts to lift the pile with cranes and other heavy equipment have so far been unsuccessful.

Rescuers work to free a 10-year-old boy trapped in a deep shaft at a bridge construction site in Vietnam’s Dong Thap province on Jan. 2, 2023.
(STR/AFP via Getty Images)

“I cannot understand how he fell into the hollow concrete pile, which has a diameter of a [25 cm] span only, and was driven 35 meters into the ground,” Le Hoang Bao, director of Dong Thap province’s Department of Transport, told Tuoi Tre News, a local newspaper, according to Reuters.

Rescuers in Vietnam on Monday worked to free a 10-year-old boy who fell into a deep shaft at a construction site two days earlier.
(STR/AFP via Getty Images)

The newspaper reported that rescuers “are not sure about the current condition of the boy,” as he “has stopped interacting with the outside though oxygen had always been pumped into the” hole.

AFP identified the trapped 10-year-old as Thai Ly Hao Nam. Video showed the boy’s distraught family members being carried from the scene while awaiting news on his condition.

Various rescuers and construction workers dig around the concrete shaft to save the boy.
(Reuters Connect)

Crews have also been drilling and softening the surrounding soil to attempt – so far without success – to pull up the concrete pillar.

According to AFP, Prime Minister Pham Minh Chinh on Monday tapped federal rescuers to join local authorities’ efforts to save the boy.

News - August 16, 2021 0
As highlighted repeatedly by OilPrice.com there are two extremely powerful reasons why the oil price has been effectively capped around...

News - January 2, 2022 0
Russia’s sabre-rattling in Ukraine has reignited the debate in Finland as to whether the Nordic country should join Nato, defying demands from Moscow that...

Bitcoin Settles Below $50K, What Could Initiate A Fresh Rally

News - December 6, 2021 0
Bitcoin declined heavily and it even spiked towards $40K against the US Dollar. BTC is recovering, but it must clear $50K for a steady...

Halo Infinite: 343 Industries Says ‘We Understand the Community Is Simply Out Of Patience’

News - April 2, 2022 0
While Halo Infinite has been positively received by many, the lack of new content in its multiplayer has led to frustration for some fans....

News - December 26, 2021 0
When John Finlayson was growing up, almost everyone in his community on the Isle of Skye was fluent in Gaelic. Now, despite decades of...
© 2022 Venture Current is a Flag Media LLC Publication. All Rights Reserved.
VC is part of the FLAG Token rewards network. Clients and partners can use FLAG Tokens for VC products and services.
VC runs 'Automatic' software. Stories posted here come from generic-topic Google news RSS feeds as well as client and partner-approved content.
If a story appears on this page that needs to be deleted due to licensing issues, please message us immediately so we can help you.