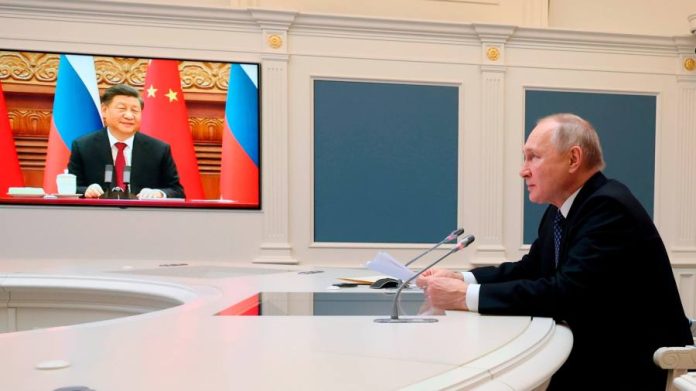 Vladimir Putin and his Chinese counterpart Xi Jinping have pledged to deepen bilateral ties, which the Russian president hailed as the “greatest in all history” as they held a joint video conference on Friday.

In an annual end-of-year video call, held in the 11th month of Russia’s full-scale invasion of Ukraine, the Chinese leader made a veiled reference to what he called “a complicated and quite controversial” international situation, but said his country’s strategic partnership with Russia would be strengthened.

Putin’s faltering invasion of Ukraine has made Russia increasingly reliant on China to balance the effect of western sanctions that have largely cut Moscow off from international markets and global supply chains.

Although Putin acknowledged Xi’s “concerns” about Ukraine at their last in-person meeting in September, China has refrained from condemning Russia over the invasion and cast blame for the war on western support for Kyiv.

China has also stepped up its purchases of Russian oil exports at a discount, helping to offset the effect of western sanctions on the Kremlin’s budget revenues.

Xi said he appreciated what he described as Russia’s continued willingness to resolve the Ukraine war through negotiations, adding that China was prepared to help resolve the crisis.

“The road to peace talks will not be smooth, but as long as the efforts are not given up, the prospect of peace will always exist,” Xi said. “China will continue to uphold an objective and fair stance, work to bring together the international community, and play a constructive role in peacefully resolving the Ukrainian crisis,” he added.

More recently, Putin has cast blame on Kyiv for ducking negotiations and insisted Moscow was ready to end the war after humiliating retreats from parts of four frontline provinces in south-eastern Ukraine that Russia had attempted to annex.

The Kremlin has insisted it will begin talks only if Ukraine accepts Russia’s control over the regions, making the notion a non-starter for Kyiv, which wants to retake the territory as a precondition for negotiations.

China’s growing strategic rivalry with the west over Xi’s claim on Taiwan, the democratic self-ruled island off China’s coast, and US sanctions on its technology industry have made Beijing reluctant to break with Moscow.

Putin said Russia’s partnership with China was “gaining in significance as a stabilising factor in conditions of rising geopolitical tensions”, while Xi said the two sides should “closely co-ordinate and co-operate in international affairs” and oppose unilateralism, adding “sanctions and interference were doomed to fail”, in a swipe at Washington.

Xi is expected to meet Putin in Russia in the spring, continuing a tradition of rotating annual visits since he became general secretary of China’s Communist party in 2012.

Putin said the talks would “demonstrate the durability of Russia and China’s ties on key issues to the whole world”.

He visited Xi in Beijing in early February, two weeks before ordering the invasion of Ukraine.

The Russian president has only left the former Soviet Union once — for a trilateral summit with Turkey and Iran in Tehran — since the war began in February, but sent his former stand-in leader Dmitry Medvedev to Beijing with a message for Xi this month.

Meanwhile, on Friday, Beijing announced that Xi’s close confidant and aide Qin Gang had been promoted to foreign minister, from his post as ambassador to the US.

While more mild-mannered than China’s other “Wolf Warrior diplomats”, Qin has been vocal defending China’s position as geopolitical frictions with Washington have grown. However, during his time in Washington he also launched a personal charm initiative that included taking free-throws at an NBA basketball game and attending business galas.

News - December 27, 2022 0
A nice SteamOS update has pushed the Steam Deck's OS to a new version of KDE Plasma, which powers its desktop mode, and that...

News - November 3, 2022 0
Over 35 digital infrastructure luminaries speaking at the second IEIC Global NAP Summit in Henrico, Virginia that will include the official ribbon cutting of...

News - January 8, 2022 0
When layers of “magic-angle” graphene (bottom) come in contact with layers of certain transitions metals, it induces a phenomenon called spin-orbit coupling in the...

News - June 30, 2022 0
© 2022 Venture Current is a Flag Media LLC Publication. All Rights Reserved.
VC is part of the FLAG Token rewards network. Clients and partners can use FLAG Tokens for VC products and services.
VC runs 'Automatic' software. Stories posted here come from generic-topic Google news RSS feeds as well as client and partner-approved content.
If a story appears on this page that needs to be deleted due to licensing issues, please message us immediately so we can help you.