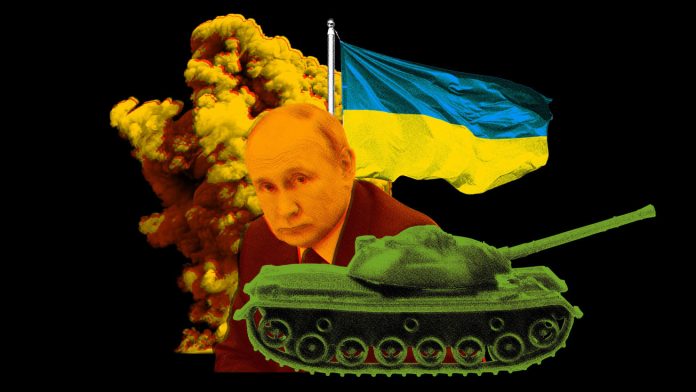 The war that Vladimir Putin thought he would win in a matter of days is still raging on after nearly a year, with both sides desperately seeking more equipment, soldiers, and international support. But Russia, it seems, may soon be in for a knock-out blow—courtesy of Ukraine’s friends in the U.S. and Europe.

Last week, Washington announced a new $3.8 billion arms package to Ukraine that included everything from sorely-needed air defense systems to artillery shells. Most of Ukraine’s excitement, though, was reserved for the inclusion of the Bradley fighting vehicle, a capable armored vehicle that Ukraine has long sought to help reclaim land seized by Russia. The decision to finally send Bradleys signals that even more sophisticated weapons systems, including tanks, might be just over the horizon.

The line of what systems are “too escalatory” to send to Ukraine has constantly been moving in Ukraine’s favor, with weapons thought to be too escalatory at the start of the war now either on their way or on the table. The U.S. and other countries have sent artillery to Ukraine throughout the conflict, but non-Soviet tanks and infantry fighting vehicles—IFVs for short—were an informal red line until just recently.

It’s not just the U.S. that’s changing their minds about what’s appropriate to send. Over the past few weeks, Germany promised to send 40 Marder infantry fighting vehicles. German and American IFVs are in various states of modernization, but they will still make a big difference, as both Russia and Ukraine are currently using a mishmash of IFVs that include much older equivalents.

The biggest question is the provision of modern American and European tanks. Eastern European countries like Poland and Czechia have delivered hundreds of Soviet-era tanks to Ukraine throughout the war. The Ukrainians have made good use of donated tanks, but have consistently asked for the more modern tanks made by the U.S., Germany, and others.

Though Europe has been reticent about sending tanks, the tide might be turning, with both the German-made Leopard 2 and the British-made Challenger 2 on the table. France already promised the AMX-10RC, which is more comparable to a tank destroyer, but has fallen short of promising its own main battle tank, the Leclerc.

The Leopard 2 is considered the most viable candidate among western tanks. Even if Germany itself doesn’t send any, other European countries from Spain to Finland can field them, and countries that can’t spare Leopards can still send spare parts.

Though the German government has the authority to restrict owners of German-made tanks from transferring them to Ukraine, the country is now under much stronger pressure to allow other countries to transfer Leopards.

On Jan. 10, Politico reported that France was pressuring Berlin to send tanks, and a day later, the president of Poland announced that some of their Leopard 2s would be sent to Ukraine— without clarifying if Germany would allow it. If Berlin does eventually agree to send tanks or allow other nations to re-export them, they will likely announce it around the Franco-German summit later this month.

The U.K. is also reportedly planning to send tanks, but would be limited in how many they could reasonably send as the size of their tank fleet dwindled over the past few years, leaving the British army with few to spare.

Beyond new donations, key equipment promised in 2022 is set to arrive in 2023. The most notable of these are air defense systems. In December, the U.S. promised a PATRIOT missile battery and France secured the export of the SAMP/T, both of which will likely be deployed in the next few months once crews are trained. The L3 VAMPIRE, a smaller system designed to shoot down drones at a fraction of the cost of more sophisticated systems, is also set to arrive in the coming months.

While Ukraine looks forward to more weapons, Russia is looking for more men. Ukraine claims that Russia will try to mobilize half a million reservists to support new offensives against Ukraine in the coming year. If Ukraine is correct, the new forces would add to the 300,000 reservists Putin called up last fall. Mobilizing that many reservists will be chaotic—but the influx of troops will make it harder for Ukraine to regain more territory.

Russia does not have international donors like Ukraine, but Moscow’s growing partnership with Iran will likely grow through 2023. Iran already supplied Russia with drones used to attack Ukraine’s infrastructure, but many of the drones and missiles rumored to appear have not yet been seen on the battlefield. Some commentators argue that Iran is waiting until October, when a UN resolution related to the 2015 Iran nuclear deal—which would trigger sanctions if Iran supplies long-range missiles—expires.

Iran has much more to offer Russia than missiles and drones. The country has been under international sanctions for some time and is more adept at dodging international restrictions. Tehran will not only be able to help Russia with oil smuggling to finance the war, but may be able to assist Russia in acquiring Western-made components for its missiles and drones. The U.S. stepped up sanctions on Iran over its weapons transfers this month, but stopping the supply of components altogether will be difficult.

With so many possibilities for weapons transfers, it’s difficult to tell how 2023 will shape up for Ukraine. Russia’s willingness to call up hundreds of thousands of new soldiers and leverage their relationship with countries like Iran will improve their ability to keep up the fight. On the other hand, if the U.S. and European support grows in size and scope, Ukraine’s commanders will find themselves at the head of an even more lethal fighting force.

Good news for the Atlantic bluefin but pity the Komodo dragon

News - September 4, 2021 0
Environment updatesSign up to myFT Daily Digest to be the first to know about Environment news. In the deep waters of the north Atlantic, a...

News - February 9, 2022 0
The Steam Deck comes out this month, and YouTubers with early models have found the battery life to be under Valve's estimates. While running a...

Nintendo Direct For Splatoon 3 Confirmed For This Week

News - August 8, 2022 0
Nintendo has confirmed that a Direct presentation will take place this week on Wednesday, August 10th at 6 a.m. PT / 9 a.m ET...
© 2022 Venture Current is a Flag Media LLC Publication. All Rights Reserved.
VC is part of the FLAG Token rewards network. Clients and partners can use FLAG Tokens for VC products and services.
VC runs 'Automatic' software. Stories posted here come from generic-topic Google news RSS feeds as well as client and partner-approved content.
If a story appears on this page that needs to be deleted due to licensing issues, please message us immediately so we can help you.