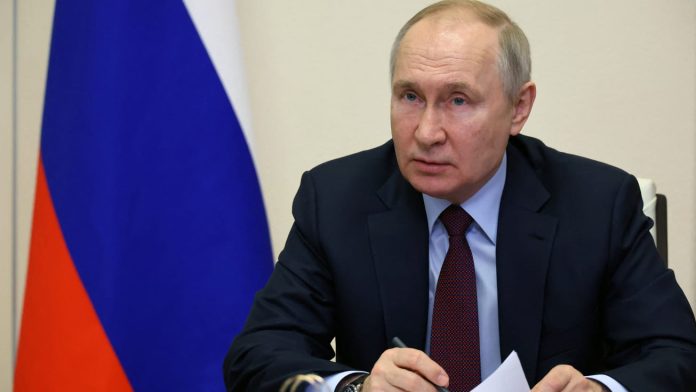 After months of setbacks on the battlefield in Ukraine, Russia’s Vladimir Putin is apparently now left to demonstrate his toughness by getting into dust-ups with his own subordinates.

The Russian leader appeared to briefly lose it on Wednesday while meeting with government officials. The breaking point came when Deputy Prime Minister Denis Manturov publicly corrected Putin after he complained that some enterprises had not yet secured contracts for the construction of new aircraft this year—a formidable task given that the country has been cut off from many Western imports crucial to construction.

Footage from the meeting shows Manturov quickly shot back that “investment projects” were underway, but Putin cut him off to gripe that it’s “taking too long.”

“There are no orders even for 2023 at some enterprises,” he said—only to be corrected yet again when Manturov told him “all the enterprises” have orders for the year and “the Defense Ministry confirmed the number.”

Putin, trying to keep his cool, responded by again insisting he was right and Manturov was wrong.

After the Trade and Industry Minister corrected him a third time, the Russian president finally flipped out.

“Let’s finish this, what’s the point of sparring here with you? The directors told me [there are no contracts]. Really, why are you playing the fool?” he scolded Manturov, demanding he get the job in a month and “no later.”

Russian state media appeared to seize on the confrontation to play up Putin’s macho image, reporting on his dressing down of Manturov but leaving out the trade minister’s initial comments that there were in fact contracts for the year.

Putin also used the meeting as an opportunity to declare that all “problems” connected to his so-called “special military operation” against Ukraine would be fixed soon.

In the same breath, he claimed the country had not suffered any fallout as a result of the war.

“None of what our enemy predicted for us happened. And this is, of course, thanks primarily to the citizens of Russia, their composure, all of our composure, readiness for challenges and to work in difficult conditions.”

News - April 28, 2022 0
Accounting firm RSM has bought out most of the shares in the business held by its former UK partners, consolidating the power of its...

News - December 4, 2021 0
Dow Jones futures will open Sunday evening, along with S&P 500 futures and Nasdaq futures. The price of Bitcoin and Ethereum plunged Saturday, the...

Now Is the Time to Buy Stocks As Inflation Peaks

News - August 9, 2021 0
(AFP PHOTO) HONG KONG – Asian markets rose Monday but investors remained cautious after a forecast-beating US jobs report reinforced optimism about the economic recovery...
© 2022 Venture Current is a Flag Media LLC Publication. All Rights Reserved.
VC is part of the FLAG Token rewards network. Clients and partners can use FLAG Tokens for VC products and services.
VC runs 'Automatic' software. Stories posted here come from generic-topic Google news RSS feeds as well as client and partner-approved content.
If a story appears on this page that needs to be deleted due to licensing issues, please message us immediately so we can help you.