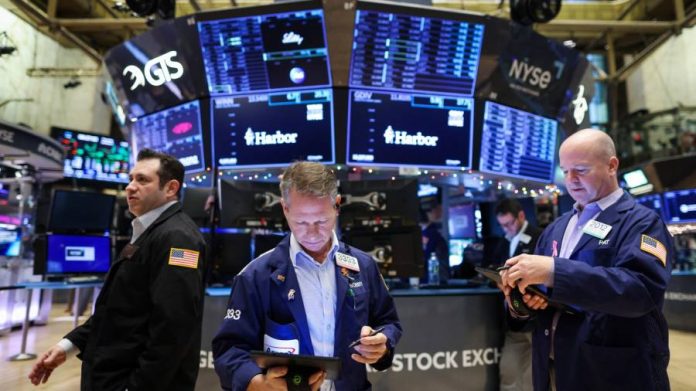 Wall Street stocks climbed and Treasuries rallied on Friday after a report showed the US economy added fewer jobs in December than in the previous month.

The US blue-chip S&P 500 index rose 1.6 per cent in choppy trading, while the tech-focused Nasdaq Composite gained 1.5 per cent, erasing earlier losses.

The gains came after data indicated that growth in US employment eased last month in a further sign that the Federal Reserve’s programme of rate increases, which began in early 2022, is cooling the economy.

The US added 223,000 jobs in December compared with 256,000 the previous month, according to the labour department. The unemployment rate slipped to 3.5 per cent from a downwardly revised 3.6 per cent. Wall Street economists had expected the world’s largest economy to tack on 200,000 new jobs last month and for the jobless rate to hold steady at an initially reported 3.7 per cent.

Average hourly earnings rose 4.6 per cent year on year on a seasonally adjusted basis compared with 4.8 per cent the previous month.

“The solid 223,000 gain in non-farm payrolls and drop-back in unemployment to a 50-year low in December will, at face value, do little to ease the Fed’s concerns about resilient core services inflation,” said Andrew Hunter, senior US economist at Capital Economics.

“That said, the softer gain in average hourly earnings suggests wage growth is nevertheless slowing and we still think the labour market will weaken more markedly this year.”

The two-year Treasury yield, which is sensitive to changes in interest rate expectations, slipped 0.16 percentage points lower to 4.29 per cent, while the benchmark 10-year yield fell 0.13 percentage points to 3.59 per cent. Bond yields move inversely to their prices.

Markets now expect US interest rates to peak at just over 4.9 per cent in June, down from 5.1 per cent before the publication of December’s jobs figures, with rates forecast to drop below 4.5 per cent for year-end from 4.7 per cent pre-jobs report.

Still, Friday’s gains on Wall Street were held back by a further fall in Tesla shares. The electric-car maker, which endured a steep sell-off in 2022 that has bled into 2023, was down 0.8 per cent on Friday in New York.

Elsewhere, the regional Stoxx Europe 600 added 1 per cent, taking its gains for the week to 4.2 per cent and leaving the index on track to register its best start to a year in more than a decade. London’s FTSE 100 gained 0.8 per cent, France’s Cac 40 rose 1.4 per cent and Germany’s Dax added 1.1 per cent.

Data published earlier this week showed price pressures eased by more than expected in Germany, France and Spain towards the end of 2022, reducing pressure on the European Central Bank to maintain its aggressive stance on inflation.

News - June 12, 2022 0
Bitcoin BTC , ethereum and other major cryptocurrencies have crashed this weekend, with more than $100 billion wiped from the combined...

News - December 17, 2021 0
The probe is said to be part of FTC chair Lina Khan's mission to prevent tech giants from shutting out the next generation of...

Stocks are set to dip at open after Dow’s record close, Nasdaq’s slide

News - January 5, 2022 0
BY THE NUMBERSU.S. stock futures fell slightly Wednesday, one day after the Dow closed at another record. The 30-stock average rose nearly 0.6% following...

News - February 10, 2022 0
The EU should allow its banks and fund managers to use UK clearing houses indefinitely, Bank of England governor Andrew Bailey said on Thursday,...
© 2022 Venture Current is a Flag Media LLC Publication. All Rights Reserved.
VC is part of the FLAG Token rewards network. Clients and partners can use FLAG Tokens for VC products and services.
VC runs 'Automatic' software. Stories posted here come from generic-topic Google news RSS feeds as well as client and partner-approved content.
If a story appears on this page that needs to be deleted due to licensing issues, please message us immediately so we can help you.