Zalmay Khalilzad, the veteran US diplomat and special envoy for Afghanistan, had been publicly silent for days after the Taliban’s takeover of Kabul and the deadly chaos that ensued.

But at the weekend, he emerged to praise the group’s leaders in a series of tweets for a public pledge to permit Afghans to leave the country if they wished even after the final US troops withdraw from the country this week.

“The statement is positive. We, our allies, and the international community will hold them to these commitments,” Khalilzad wrote.

His comments reflected the fragile, tense and often awkward co-operation that has emerged between the Taliban and Washington since the Islamist militia rolled into Kabul — and how the US is trying to use the prospect of international legitimacy to influence the emerging Taliban government.

In the weeks since President Ashraf Ghani’s administration collapsed, Washington and other foreign governments, many of which had long treated the Taliban as political pariahs, were forced to co-ordinate with the Islamists’ leaders to arrange safe passage to Kabul’s airport for their own citizens and tens of thousands of their Afghan allies.

The degree of the international engagement was demonstrated by an unlikely visit by William Burns, the CIA director, to Kabul to meet Taliban leader Mullah Abdul Ghani Baradar last week to discuss the evacuation process. Such contacts have enabled more than 114,000 to fly out of Kabul in the two weeks following the Taliban taking over the city, according to White House figures.

“The Taliban is a reality outside Kabul airport,” said an official from India, which operated several evacuation flights. “Everyone had to work with the Taliban to some degree to get their people out — that was a priority for every country.”

Jen Psaki, White House press secretary, defended Washington’s high-level interactions with Taliban leaders, saying the militants were “not a group we trust; they are not our friends” but insisting that “co-ordination is necessary in order to continue our evacuation measures”.

However, officials from the US and other foreign governments said future relations with Taliban-ruled Afghanistan depended on how the Islamist movement wields its newfound powers once it formally unveils its government, which is expected this week. A meeting between the G7, Nato, UN Security Council representatives, Qatar and Turkey will be held in Doha on Monday to discuss the situation.

Whether the Taliban permits foreign nationals and disgruntled Afghan citizens to leave freely once normal air travel resumes will be one litmus test.

Foreign governments will closely monitor whether the group lives up to promises made in its February 2020 deal with former US president Donald Trump to crack down on terror groups operating from Afghan soil and preserve some of the gains made over the past 20 years in ensuring basic rights and freedoms for women.

“Nothing has been promised to the Taliban,” Antony Blinken, US secretary of state, said in an interview with NBC on Sunday.

“We have made very clear — and not just us, country upon country around the world have made clear — that there are very significant expectations of the Taliban going forward if they’re going to have any kind of relationship with the rest of the world.” 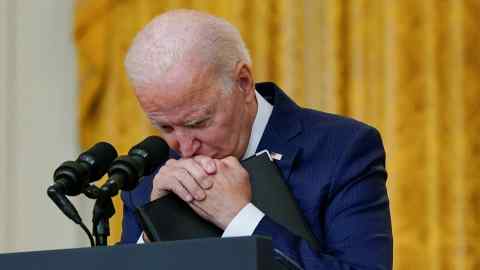 When the Taliban ruled Afghanistan from 1996 to 2001, no western country recognised it as a legitimate government. Taliban representatives were not permitted to occupy Afghanistan’s UN seat.

But Washington has dangled the prospect of a Taliban government receiving international acceptance if it prevents the country from becoming a sanctuary for Islamists as it had been for al-Qaeda prior to the 9/11 terror attacks.

While senior US officials said they were unlikely to maintain a diplomatic presence in Afghanistan immediately after their military exit, many analysts believed the US was prepared to engage in counter-terrorism co-operation with a Taliban administration.

“The long-term relationship in the next couple of months and years will be shaped by counter-terrorism policy — trying to make sure that Afghan soil is not being used to plan or launch attacks against the west and the US,” said Rudra Chaudhuri, a senior lecturer at King’s College London’s Department of War Studies.

“That will be the primary, highly transactional relationship the US will have with the Taliban.”

US military officials and Taliban leaders have already displayed a striking degree of co-ordination during the evacuation. Speaking to reporters hours after a suicide attack at an airport gate last week killed at least 100 Afghans and 13 American troops, General Kenneth McKenzie, head of US Central Command, conceded that Washington was using “the Taliban as a tool to protect us as much as possible”.

The US had shared information with the Taliban and discussed extending the security perimeter around the airport and closing roads, McKenzie said. “We believe that some attacks have been thwarted by them . . . we’ve been doing this since the 14th [of August],” he added.

However, the devastating airport attack, which Washington has blamed on Isis-K, raised questions about the Taliban leadership’s willingness and capacity to prevent the country from re-emerging as a terrorist hub. US intelligence capacity in Afghanistan could also be degraded without boots on the ground.

Jake Sullivan, White House national security adviser, said the Taliban had strong incentives to co-operate given US influence over Afghanistan’s “relationship with the international financial system, its access to any kind of reserves and resources”.

He also hinted that the US could still strike the Taliban if US citizens were threatened.

But even if the Taliban co-operated on counter-terrorism, Washington was unlikely to quickly recognise its government or to do so without the support of European partners, many of which were deeply unsettled by the groups return to power.

“Access to development aid, and diplomatic recognition are the only cards the international community has,” Chaudhuri said. “They won’t give up this card too easily or too soon.”

Video: Highlights of an FT subscriber webinar on Afghanistan

Chevron to resume Venezuela oil production as US eases sanctions

News - January 4, 2022 0
We’re holding out hope that this will finally be the year when Apple decides to let users natively customize their Home Screen icons. While...

News - October 27, 2021 0
boonchai wedmakawand | Moment | Getty ImagesCrypto enthusiasts had reason to cheer last week as digital currencies notched another milestone: the first U.S. bitcoin...
© 2022 Venture Current is a Flag Media LLC Publication. All Rights Reserved.
VC is part of the FLAG Token rewards network. Clients and partners can use FLAG Tokens for VC products and services.
VC runs 'Automatic' software. Stories posted here come from generic-topic Google news RSS feeds as well as client and partner-approved content.
If a story appears on this page that needs to be deleted due to licensing issues, please message us immediately so we can help you.