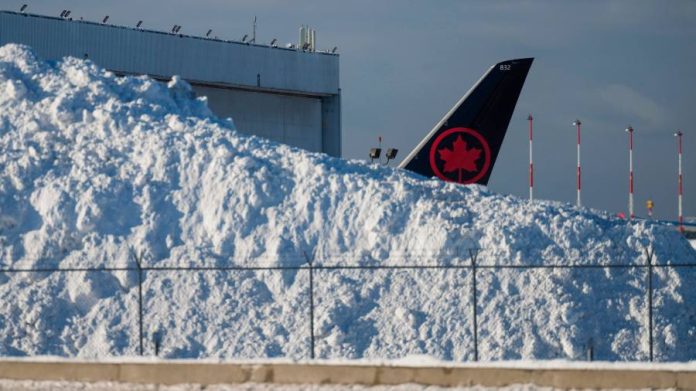 A bitterly cold Arctic air mass has caused temperatures to plummet across much of the northern hemisphere, where parts of the US, Canada and Siberia have recorded temperatures below minus 40C.

In the US, the powerful Arctic storm has placed more than 200mn people, about 60 per cent of the population, under weekend weather alerts with warnings of life-threatening wind chills, blizzards and ice storms.

The cold weather and hazard forecasts extend as far south as the US-Mexico border, the Gulf coast and Florida, where near-freezing temperatures are expected on Christmas Eve.

The weather system, which is being called a “Bomb Cyclone”, is also known as a bombogenesis, a term given to an explosive storm that intensifies rapidly. In such storms, temperatures plummet as the atmospheric pressure drops significantly, usually as the result of a cold air mass from the north colliding with a warm air mass from the south, according to the National Ocean Service.

The National Weather Service said on Friday night that the Arctic air would be in place across much of the central and eastern US with temperatures well below average, including overnight lows of below zero for many areas of the Midwest, and in the single digits and teens elsewhere across portions of the southern and eastern US.

In Chicago, temperatures fell to minus 23C in the early hours of Friday, and New York swung from 11C on Friday morning to minus 10C by the afternoon and were down to minus 14 by Saturday morning.

Miami temperatures plummeted from a warm 28C on Friday to just 5C overnight on Saturday.

In the northern US, much of Montana and Wyoming has experienced temperatures of below minus 45C, or 15C below the 1981-2010 average.

Patterns of extreme weather typify the effects of climate change, although weather attribution experts are cautious about assessing single events.

However, some meteorologists this week linked the freeze to the shifting jet stream that has caused disrupted weather patterns for several years.

Scientists have been attempting to understand how a peculiar shape in the band of fast-moving air that controls weather in the mid-latitudes is driving the extreme weather events, including heatwaves.

US president Joe Biden issued warnings from the White House on Thursday about the severe weather system that would disrupt most of the country and create life-threatening conditions.

The storm would bring with it powerful Arctic gusts that would cause sudden whiteouts and zero visibility, the national weather service said. Travel in those conditions would be “extremely dangerous and at times impossible”.

“In addition to the very cold temperatures, high winds in the wake of the front will produce dangerous wind-chill readings across nearly all of the central to eastern US,” it added, warning the plunging temperatures could lead to frostbite on bare skin within five to 10 minutes.

More than 6300 flights had been cancelled across the US on Friday, including some 3600 international flights, according to the flight-tracking site FlightAware.

News - October 22, 2021 0
Rachel Cruze is a personal finance expert and the author of “Know Yourself, Know Your Money.” She is also the host of “The Rachel...

News - January 20, 2022 0
ALBANY, N.Y. (NEWS10) – Free at-home rapid COVID testing kits will soon be mailed to Americans across the country, after the federal website for...

News - April 1, 2022 0
Looking ahead The dramatic shifts in the interest rate landscape may have prompted some investors to rethink their portfolios, especially their bond holdings....

News - November 6, 2021 0
Statewide Iowa — The Iowa office of the U.S. Small Business Administration is reporting the just-ended fiscal year saw upturns in both the amount...

News - August 31, 2022 0
Er Hu works in an office tower in Chongqing most days. But when forest fires erupted in the south-western Chinese city as it faced...
© 2022 Venture Current is a Flag Media LLC Publication. All Rights Reserved.
VC is part of the FLAG Token rewards network. Clients and partners can use FLAG Tokens for VC products and services.
VC runs 'Automatic' software. Stories posted here come from generic-topic Google news RSS feeds as well as client and partner-approved content.
If a story appears on this page that needs to be deleted due to licensing issues, please message us immediately so we can help you.