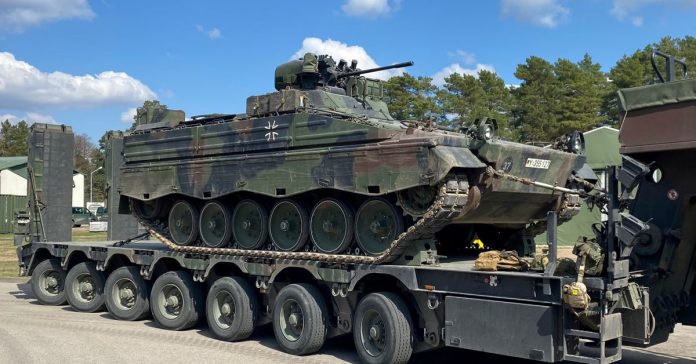 NEAR KREMINNA, Ukraine, Jan 6 (Reuters) – Russian and Ukrainian forces exchanged artillery fire at the front line in Ukraine on Friday, even after Moscow said it had ordered its troops to stop shooting for a unilateral truce that was firmly rejected by Kyiv.

President Vladimir Putin ordered the 36-hour ceasefire from midday on Friday to observe Russian Orthodox Christmas. Ukraine has said it has no intention to stop fighting, rejecting the purported truce as a stunt by Moscow to buy time to reinforce troops that have taken heavy losses this week.

“What ceasefire? Can you hear?” said a Ukrainian soldier, using the nom de guerre Vyshnya, as an explosion rang out in the distance at the front line near Kreminna in eastern Ukraine. “What do they want to achieve if they keep on shooting? We know, we have learnt not to trust them.”

Russia’s defence ministry said its troops began observing the ceasefire from noon Moscow time (0900 GMT) “along the entire line of contact”, but said Ukraine had kept up shelling populated areas and military positions.

Reuters heard explosions of what Ukrainian troops at the front line described as incoming Russian rocket fire. Ukrainians fired back from tanks.

The Ukrainian troops said it was quieter than many other days because snowy weather had made it hard to fly drones and spot targets.

“The situation today is exactly the same as yesterday, the day before yesterday, last week and last month,” said one, concealing his face with a scarf. “There is no point in talking to them, in believing in their promises, orders and decrees.”

It was not immediately possible to establish whether there was any reduction in the intensity of fighting at other locations.

One witness in the Russian-occupied regional capital Donetsk also described outgoing artillery fired from pro-Russian positions on the city’s outskirts after the truce was meant to take effect.

The Ukrainian governor of the front line eastern Luhansk province, Serhiy Haidai, said that in the first three hours of the purported ceasefire the Russians had shelled Ukrainian positions 14 times and stormed one settlement three times.

“Orthodox murderers wish you a merry Christmas,” he wrote on the Telegram messaging app.

Putin attended a service by himself inside a Kremlin cathedral rather than joining other worshippers in a public celebration. State television showed two live clips of Putin inside the gilded Cathedral of the Annunciation as Orthodox priests conducted the midnight service, known as the Divine Liturgy.

Washington unveiled its latest $3.75 billion package of military aid for Ukraine and allies affected by the war, for the first time sending the U.S. army’s workhorse Bradley Fighting Vehicles.

That caps a week in which both Germany and France also pledged armoured vehicles, finally fulfilling one of Kyiv’s most urgent requests from its allies, for armour to defeat Russian tanks in mechanised battles.

Ukrainian President Volodymyr Zelenskiy, who pleaded for the Bradleys in Washington last month on his first trip abroad since the war began, said on Friday they were “exactly what is needed”.

Shortly before the ceasefire was meant to start, rockets slammed into a residential building in Kramatorsk, close to the eastern front line, damaging 14 homes, though with no casualties as many people have fled.

“It’s bad, very bad,” said Oleksnadr, 36, outside a supermarket at the time of the attack. “We need to pressure them, get them to leave, maybe more air defence systems would help. This happens often, not only on festive occasions. Every other day.”

One rescue worker was killed and four others injured when Russian forces shelled a fire department in the southern Ukrainian city of Kherson before the deadline early on Friday, the regional governor said. Reuters could not immediately verify this.

Zelenskiy rejected the Russian ceasefire out of hand as a ploy for Russia to buy time to bring in equipment and ammunition after sustaining crippling losses at the front line. Scores of Russian troops were killed in one attack over the New Year weekend.

Laura Cooper, a U.S. deputy assistant secretary of defense focusing on Russia and Ukraine, remarked to reporters in Washington on Friday that Putin’s statement about a ceasefire needed to be taken with a “grain of salt.”

“This is the same man who said he would not invade Ukraine,” Cooper said.

Russia invaded Ukraine on Feb. 24, starting a war that has killed tens of thousands of people and displaced millions of Ukrainians. With weapons and financial support from the United States and Europe, Ukraine has driven Russia back from some of its territory but battles are raging in the east and south.

Ukraine’s military General Staff said its soldiers repelled repeated Russian attacks over the past day, with Moscow focused on trying to take towns in Donetsk.

Biden’s Taiwan comment hangs over summit with leaders of Japan, India and Australia on...

News - May 24, 2022 0
Biden's statement is sure to loom over the day's meetings, as he's set to meet in-person with the leaders of Japan, India and Australia...

CVS, Hormel, RH, GameStop and others

News - December 9, 2021 0
Check out the companies making headlines before the bell:CVS Health (CVS) – The drug store operator issued new guidance ahead of its investor day,...

News - May 2, 2022 0
The government of China does not have the legitimacy that flows from winning an election. But officials in China often claim that the Communist...

New Start: ITA Spends €90m On Alitalia's Branding To Stop Its Use

News - October 16, 2021 0
Italy’s new state-owned flagship airline, state-owned carrier Italia Trasporto Aereo (ITA), has spent 90 million euros on Alitatlia’s… Source
© 2022 Venture Current is a Flag Media LLC Publication. All Rights Reserved.
VC is part of the FLAG Token rewards network. Clients and partners can use FLAG Tokens for VC products and services.
VC runs 'Automatic' software. Stories posted here come from generic-topic Google news RSS feeds as well as client and partner-approved content.
If a story appears on this page that needs to be deleted due to licensing issues, please message us immediately so we can help you.