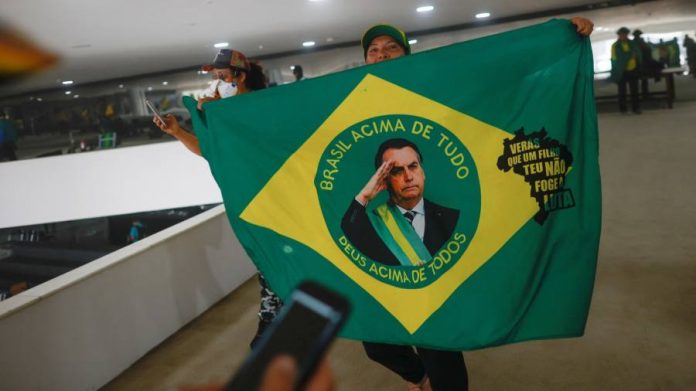 Thousands of supporters of Brazil’s rightwing former president Jair Bolsonaro on Sunday stormed the nation’s Congress, supreme court and presidential palace in the first crisis of Luiz Inácio Lula da Silva’s presidency. They demanded the veteran leftwinger stand down and called for the military to launch a coup d’état.

Who are the protesters?

Bolsonaro’s populist movement has long relied on radical, highly mobilised supporters who turn out in large numbers for rallies and events. They were a mainstay of his presidency between 2019 and last year and also protested in vast numbers following his narrow defeat to Lula in the October elections.

In the days after the vote, many pro-Bolsonaro truckers blocked highways across the country, choking supply chains and at one point forcing the closure of Brazil’s main international airport. These hardline backers are nationalist, socially conservative and often evangelical Christians. They accuse Lula and his Workers’ party of being corrupt and against family values, claiming the left intends to implant socialism in Brazil.

What do they believe?

For more than a year ahead of the election, Bolsonaro cast doubt on the integrity of Brazil’s electronic voting machines without presenting reputable evidence for his claims. Election authorities had repeatedly demonstrated the integrity of the system, and international observers had deemed the election fair and transparent.

Although Bolsonaro was careful not to openly question the election results in the days following the ballot, his supporters have claimed — without evidence — that the ballot was rigged. They also accuse top judges of showing political bias in favour of Lula and label a judicial crackdown on social media misinformation as censorship. Since the election, hundreds have camped outside military bases across the country, demanding the armed forces intervene to prevent Lula’s presidency.

“The armed forces have to enter and put Bolsonaro back to govern the country and continue his great job,” said Alexandra Morais, a woman in her 60s, at a demonstration outside an army barracks in the city of Belo Horizonte last year. “Seventy to 80 per cent of Brazilians want this, but the election was fraudulent.”

Despite a tense build-up ahead of Lula’s inauguration, including the discovery of an alleged bomb in Brasília, few turned out to protest at the swearing-in ceremony last week.

While there were immediate similarities between Sunday’s events and the January 6 invasion of the US Capitol in 2021, the rioters in Washington aimed to prevent the certification of Joe Biden as president, whereas Lula had already been confirmed as his country’s head of state a week prior. Brasília’s Congress was not in session and the supreme court and presidential palace were unoccupied when they were stormed.

Even if Sunday’s assault lacked a clearly defined practical objective — one aim may have been to provoke a state of emergency — it nevertheless struck a symbolic blow at the heart of political power in Latin America’s largest nation and the seats of its three branches of government.

What does Bolsonaro say?

For two days following his election defeat, Bolsonaro remained silent. Then in a very brief statement, he offered his tacit backing to radical protesters blocking highways and rallying outside army bases. “The people’s movements right now are the result of indignation and a feeling of injustice at how the electoral process unfolded,” Bolsonaro said at the time.

In the closing months of his presidency, he allowed demonstrators to continue occupying areas outside army bases, even as they called for military intervention to prevent the inauguration of Lula.

While Bolsonaro himself has not openly contested the election outcome, his political party launched a legal challenge to overturn the results, but it was rapidly rejected by a court. The conservative former army captain condemned an alleged bomb plot in Brasília uncovered by police a week before Lula’s inauguration ceremony.

In an indication of the intense bitterness between Lula and Bolsonaro, the far-right populist broke with tradition by refusing to attend the swearing-in to hand over the presidential sash. Instead, he travelled to Florida, where last week he was spotted eating fast food.

Bolsonaro took to Twitter on Sunday evening to denounce the actions of hardcore extremists.

“Peaceful demonstrations, in accordance with the law, are part of democracy. However, vandalism and invasions of public buildings as occurred today, as well as those committed by the left in 2013 and 2017, cross the line,” he wrote.

The ultra-conservative ex-president also rejected Lula’s accusations that he had encouraged the attacks.

Even so, Bolsonaro is likely to face censure from opponents for creating a polarised atmosphere and antagonism towards Brazil’s institutions, especially the supreme court.

Following Sunday’s events, many have also criticised the governor of Brasília, Ibaneis Rocha, and his secretary of security, Anderson Torres. Both are considered close to the former president and have been seen to take a light touch with his supporters. On Sunday night, Reuters reported that Brazil’s solicitor-general had requested Torres’s arrest.

Lula took power vowing to unite the country after a divisive election. The attacks are likely to push him to take a tougher stance on far-right extremism. Visibly shaken, the president on Sunday called the demonstrators “vandals and fascists” who “have to be punished”.

Flavio Dino, Brazil’s new minister for justice, was eager to crack down even before the offensive on Congress. He is likely to push for prosecutions and a programme to stamp out extremism.

News - December 17, 2022 0
Dec 17 (Reuters) - Former FTX Chief Executive Sam Bankman-Fried is expected to appear in court in the Bahamas on Monday to reverse his...

News - January 30, 2022 0
Spotify said it would add “content advisory” warnings to podcasts that discussed Covid-19, as the streaming service responded to a backlash against its popular...

News - July 27, 2022 0
Philippine President Ferdinand Marcos Jr. delivers his first State of the Nation Address, in Quezon City, Metro Manila, Philippines, July 25, 2022. Jam Sta...
© 2022 Venture Current is a Flag Media LLC Publication. All Rights Reserved.
VC is part of the FLAG Token rewards network. Clients and partners can use FLAG Tokens for VC products and services.
VC runs 'Automatic' software. Stories posted here come from generic-topic Google news RSS feeds as well as client and partner-approved content.
If a story appears on this page that needs to be deleted due to licensing issues, please message us immediately so we can help you.