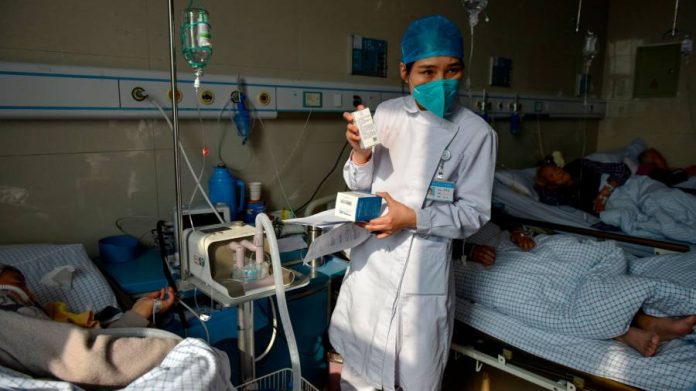 The World Health Organization has called on China to share more information on its surge in Covid-19 cases, after Beijing over the weekend reported almost 60,000 deaths since abandoning strict pandemic restrictions last month.

The WHO said in a statement that its director-general Tedros Adhanom Ghebreyesus had spoken with Ma Xiaowei, head of China’s National Health Commission, about the country’s Covid-19 situation and was analysing the new data shared by Chinese authorities.

It said Chinese officials had provided information “on a range of topics, including outpatient clinics, hospitalisations, patients requiring emergency treatment and critical care, and hospital deaths related to Covid-19 infection”.

But the WHO added that it had “requested a more detailed breakdown of data by province over time”.

The agency said it had also requested that further information on sublineages of the highly transmissible Omicron variant of Covid-19 circulating in China be shared with open access databases, both to enable deeper analyses “and for continued collaboration with technical groups working on virus evolution, clinical care, and beyond”.

Chinese authorities on Saturday reported nearly 60,000 Covid-related deaths at hospitals across the country since the end of strict pandemic restrictions in December, following criticism from groups, including the WHO, for underrepresenting the severity of the outbreaks.

Prior to Saturday’s estimate, Beijing had reported only limited fatality data since December 7, when Chinese authorities announced sweeping relaxations to the country’s “zero-Covid” pandemic policy.

The policy, which involved locking down cities for months on end and other disruptive measures, began to come undone late last year as authorities struggled to contain more transmissible variants, resulting in a wave of nationwide protests.

However, the official estimate for Covid-related deaths provided on Saturday was not a comprehensive mortality figure for the disease, as it excludes deaths outside hospitals at locations including senior care homes.

The WHO has previously called on Beijing to step up its vaccination programme, warning that China “lags behind” in vaccination rates, particularly among elderly groups most at risk of severe disease.

On Saturday, a senior official with China’s NHC said the average age of fatalities among Covid-related deaths at the country’s hospitals was just over 80 years old, with more than 90 per cent of those who died aged 65 or over.

Although official information on the actual scale of the outbreaks, has been limited, internal Chinese government estimates indicated that about 250mn people, or about a fifth of China’s population, may have been infected as of late December.

Recent data releases have also pointed to severe disruptions to China’s economy from the latest waves of infections. Goldman Sachs analysts have forecast China to report year-on-year growth of just 1.7 per cent for the fourth quarter when economic data are released on Tuesday.

News - August 9, 2022 0
News Corp, the publishing company controlled by Rupert Murdoch, said profits almost doubled in the year to June as growth in digital advertising and...

News - October 30, 2022 0
U.S. companies have come to embrace health savings as a benefit for employees in recent years. Many businesses increasingly see HSA’s as plan developers...

News - November 28, 2022 0
British Prime Minister Rishi Sunak has said China poses a “systemic” challenge to UK values and interests as his government condemned Beijing after a...

News - August 28, 2021 0
Altcoins Solana, Cardano and ICP all experienced significant price surges in the last twenty-four hours as crypto markets swelled by more than 4% to...
© 2022 Venture Current is a Flag Media LLC Publication. All Rights Reserved.
VC is part of the FLAG Token rewards network. Clients and partners can use FLAG Tokens for VC products and services.
VC runs 'Automatic' software. Stories posted here come from generic-topic Google news RSS feeds as well as client and partner-approved content.
If a story appears on this page that needs to be deleted due to licensing issues, please message us immediately so we can help you.