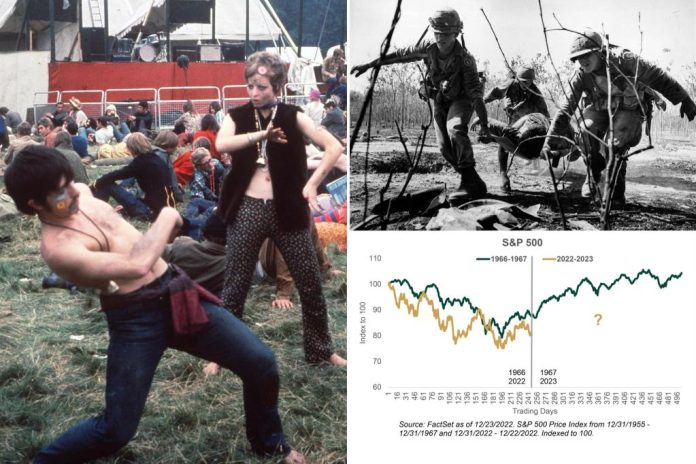 Hot inflation and recession fears. Spiking interest rates from the Fed. Divisive US politics. A regional war overseas with global repercussions. I’m not talking about 2022 – I’m talking about 1966.

A familiar set of fears dogged stocks during the year that also gave us the Chevy Camaro, the NFL-AFL merger and “How the Grinch Stole Christmas.” But a year later, 1967 delivered not only the “Summer of Love,” but also a stunning rally for stocks as economic fears faded. This year has been uncannily 1966ish. Expect a startling, 1967-like bull market in the year ahead.

In 1966, the S&P 500 endured a minor bear market — a 22% rout that started in early January and bottomed in October (yes – just like 2022). The Vietnam War escalated. Major social and infrastructure legislation added to divisive midterm elections. Disdain for President ‘LBJ’ was different, but in many ways parallel, to sentiment among many voters for President ‘Brandon’. Inflation exploded. So the Fed hiked short-term interest rates – less than now – but by historical standards significantly, steadily and scarily.

Recession fears reigned. Bears like to talk about “capitulation” — that panicky, violent, cascading selloff that typically ends bear markets. They liked to talk about it in 1966, too. But capitulation never came. Instead, October began a new bull market, with stocks rising just like they rose this quarter. After a stealthily positive 6% fourth quarter, stocks soared 24% in 1967.

Sentiment in 2022 was – and still is – not good when it comes to stocks. Virtually all surveys show dourness, like the American Association of Individual Investors’ retail investor gauge. The University of Michigan’s Consumer Sentiment survey hovers near all-time record lows — which only happens when higher prices are looming. A 2023 recession is overwhelmingly expected. Fully 68% of respondents in Bank of America’s Global Fund Manager Survey expect one.

Reality is brighter. A large minority expected we were in a recession last quarter, too. But US third quarter GDP grew a surprisingly strong 3.2% annualized, reversing two quarterly declines (skewed by inventory change and imports). Almost all other major nations saw positive, improved GDP growth.

Nevertheless, the recession expectation consensus grew anyway. This, mind you, wasn’t an altogether bad thing. The longer firms expect recession, the more they prepare. Companies have spent this year cutting inventories and pruning headcounts. As a result, a recession has become less likely, and if it does come, it will be milder than it would have been otherwise. Forewarning is mitigation.

Likewise, the CEOs of almost every big bank – from Jamie Dimon to Jane Fraser — have openly, long and often, trashed the US economy and predicted a recession. But recessions always bring savagely rising default rates on their loans, pummeling earnings. If these bankers were truly fearful of defaults, these bankers presumably would have already scuttled their lending.

They haven’t. As I noted in this column Dec. 13, November’s US loan growth hit 11.8% year-over-year, accelerating from year-end 2021’s 4.0%, showing monthly growth that’s notably inconsistent with looming recession. Ditto for global loan growth, which has grown every month since March.

And the Fed hikes? Everyone thinks those kill the economy. Usually, they do. But every time they spiked rates this year, loan growth galloped faster. Why? Because banks’ future lending profitability rises now with rate hikes. And when they lend, the borrowers spend. They don’t sit on it. Historically, bank lending costs usually paralleled the bank overnight borrowing cost controlled by the Fed. Not now, as I have also noted here on Dec. 13.

For that reason, today’s much ballyhooed “inverted yield curve” fears — 3-month Treasury yields exceeding 10-year rates — are overblown. In September 1966, the Fed also inverted the yield curve. Yet the bulk of the inversion came later, after stocks bottomed, like this time. And no recession struck.

Politics? Like 1966, 2022 was a midterm election year. As I detailed in this column Nov. 16, midterms create stock market rocket fuel — averaging 18%-plus returns during the third years of US presidents’ terms. They have been stronger still, averaging 28%, when the second year was negative, like 2022 and 1966 were. Stocks surged 24% in 1967.

Unlike 1967, 2023 bond returns should flow positive, reversing 2022 as 2023 inflation risk falls, as I also have noted in this column. Long-term interest rates will price that lower risk.

Despite all of this, I hear what you’re saying: 2022 hasn’t been pretty. Pessimism feels like a safe, comfortable bet. But maybe it’s also possible that folks have been bracing for the worst long enough.

As we ring in the New Year, I would suggest we instead brace for a pleasant surprise. I can’t promise another “Summer of Love” for 2023 when it comes to sex, drugs or rock ‘n’ roll. But I do believe the New Year will deliver a surprisingly strong stock market globally.

Democracies must use AI to defend open societies

News - August 25, 2022 0
The world would have been a far darker place had Nazi Germany beaten the US to build the world’s first atomic bomb. Mercifully, the...

News - January 24, 2023 0
The Bank of Japan appears to have reached a truce with bond traders betting it will have to ditch its efforts to control yields...

News - December 20, 2021 0
The Carnival Cruise Ship 'Carnival Vista' heads out to sea in the Miami harbor entrance known as Government Cut in Miami, Florida June 2,...
© 2022 Venture Current is a Flag Media LLC Publication. All Rights Reserved.
VC is part of the FLAG Token rewards network. Clients and partners can use FLAG Tokens for VC products and services.
VC runs 'Automatic' software. Stories posted here come from generic-topic Google news RSS feeds as well as client and partner-approved content.
If a story appears on this page that needs to be deleted due to licensing issues, please message us immediately so we can help you.