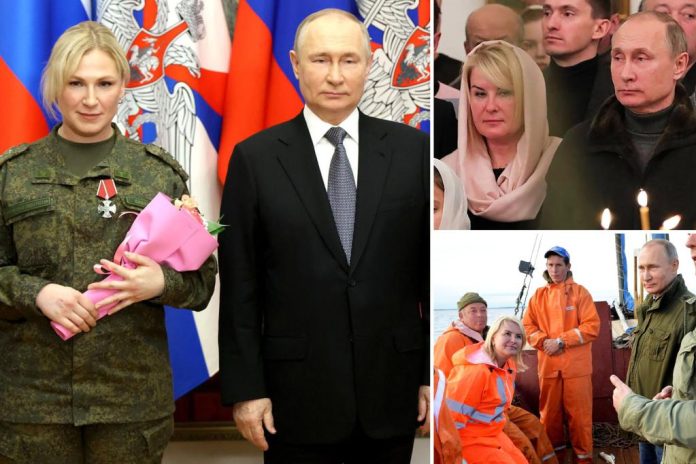 A female “soldier” honored by Russian President Vladimir Putin in his New Year’s message has popped up in photos with the leader before — as an ice-cream vendor, an angler and a Christmastime parishioner.

The blonde, who was clad in fatigues and feted with other reputed soldiers in the dictator’s holiday broadcast, is a regular fixture at Putin’s public appearances, Sibir.Realii, a media outlet tied to Radio Liberty, reported on the messaging app Telegram.

“In September 2016, the president was photographed on a lake in the Novgorod region with fishermen – she was among them,” Sibir.Realii posted.

She was identified as Larisa Sergukhina at the time.

The woman also was among the group of parishioners around Putin in 2017 at an Eastern Orthodox Christmas service in a Novgorod monastery and referred to as Sergukhina, the outlet said.

At least two of the “anglers” previously with the woman were also depicted as “parishioners” at the service, photos show — leading some observers to speculate they are all actors used for cringe-worthy staged photo ops with Putin or else a poor attempt to disguise his security detail.

As the British tabloid The Sun reported in 2019, Putin overpaid for his ice cream by more than 4,000 rubles — roughly $60 — and told the blonde to give the change to the air minister for the “development of aviation.”

At the time, Kremlin watchers opined that the woman was likely a member of Putin’s protective service, working under cover to help the Russian president appear to be mingling with average Russians.

At this year’s New Year’s broadcast, the woman was identified as a Russian army medic, Anna Sidorenko. She stood behind Putin with her supposed comrades in combat fatigues during a message about the war in Ukraine.

In the speech, Putin vowed to defend Russia’s “historical territory” — a reference to his assertion that Ukraine is not an independent nation.

“The West lied about peace,” he said. “It was preparing for aggression. … And now they are cynically using Ukraine and its people to weaken and split Russia.”

Putin has regularly pushed the theory that NATO and the European Union sought to threaten Russia by supporting Ukrainian moves to join the European community.

Despite a year of unexpected failures by Russian troops — and a bloody stalemate along the front lines in eastern Ukraine — Putin’s predictions were optimistic.

“Together, we will overcome all difficulties and preserve our country’s greatness and independence,” he said.

“We will triumph, for our families and for Russia.”

Singapore’s Zilingo to Liquidate After Crisis at Fashion Startup

News - April 15, 2022 0
“The speculation is that advertisers could be able to pay DOGE for ads and for other uses on Twitter,” explained Kryptomon Chief Marketing Officer...

News - January 29, 2022 0
Turkey’s president Recep Tayyip Erdogan has sacked the head of the national statistical institute after reports of tension between them over the country’s inflation...

News - August 12, 2022 0
US and Chinese officials have been discussing a face-to-face meeting between Joe Biden and Xi Jinping, amid a significant escalation in friction over Taiwan.Kurt...

News - September 4, 2021 0
Global investment bank JPMorgan says cryptocurrency markets are “looking frothy” as retail investors spill over from the stock market into cryptocurrencies and non-fungible tokens...
© 2022 Venture Current is a Flag Media LLC Publication. All Rights Reserved.
VC is part of the FLAG Token rewards network. Clients and partners can use FLAG Tokens for VC products and services.
VC runs 'Automatic' software. Stories posted here come from generic-topic Google news RSS feeds as well as client and partner-approved content.
If a story appears on this page that needs to be deleted due to licensing issues, please message us immediately so we can help you.